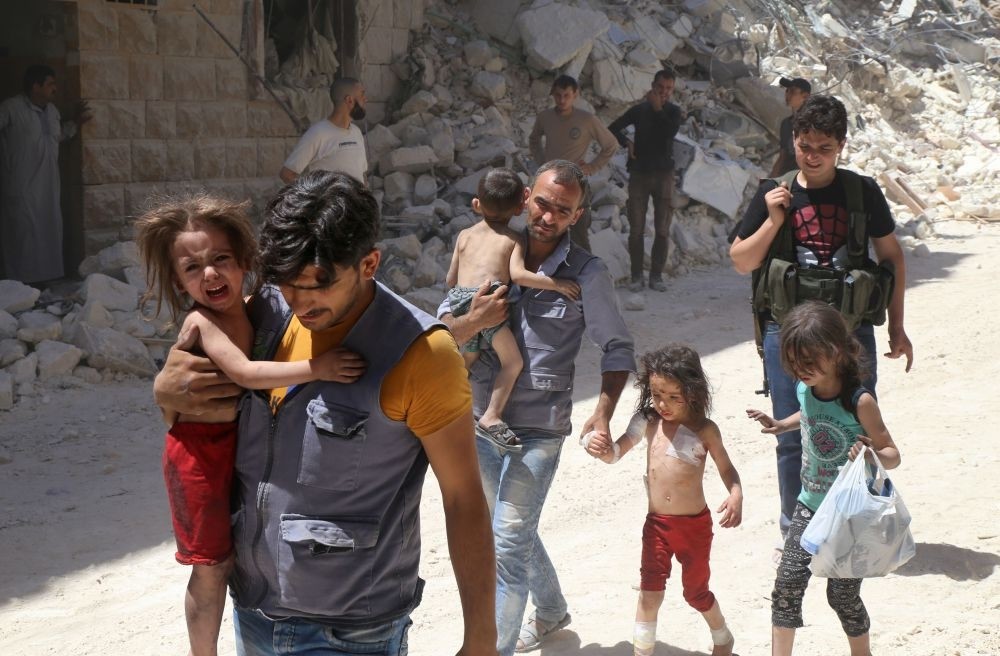 Syrian men carry injured children amid the rubble of destroyed buildings following reported airstrikes on the opposition-held neighborhood of al-Mashhad in the northern city of Aleppo on July 25.
by Daily Sabah with Wires Jul 27, 2016 12:00 am

With Syrian regime forces tightening their siege of the opposition-held parts of Aleppo, U.N. aid chief warns of another humanitarian crisis

Syria's regime intensified airstrikes on opposition-held areas of the northern province of Aleppo on Monday, as the U.N. backed a call for a humanitarian truce and warned that 200,000 inhabitants living in the eastern part of the city face a life-threatening food shortage.

The push for aid to reach desperate civilians trapped by a regime siege in Syria's former second city came on the eve of a meeting between a U.N. envoy with U.S. and Russian officials to try to revive peace talks.

U.N. aid chief Stephen O'Brien branded the siege on opposition-held parts of Aleppo as "medieval and shameful," and called for weekly 48-hour humanitarian truces to prevent it from taking hold.

''I cannot stress enough how critical the situation is'' east of Aleppo, O'Brien told the U.N. Security Council. He warned that food supplies in eastern Aleppo, home to at least 200,000 people, were expected to run out by the middle of August. "The international community simply cannot let eastern Aleppo city become yet another – and by far the largest – besieged area."

Nearly 600,000 people are estimated to be living under siege in Syria, most of them encircled by forces loyal to the regime of Bashar al-Assad, whose approval the United Nations says is necessary to deliver aid by air. Britain, France and the United States quickly endorsed O'Brien's call. Japan's ambassador, Koro Bessho, who holds the council presidency, said there was "overwhelming support for the idea" among the 15 council members.

French ambassador to the U.N., Francois Delattre, compared Aleppo's plight to Sarajevo during the Bosnian war, and said the Security Council could not allow "such war crimes" to happen again.

On Monday, air strikes and barrel bombs killed 22 civilians in opposition-held parts of the northern province, and opposition rocket fire on government areas killed three more, according to a monitor.

More than 280,000 people have been killed in Syria and more than half its population has been displaced since the conflict began.

U.S. Secretary of State John Kerry and Russian counterpart Sergei Lavrov were also due to meet Tuesday on the sidelines of an Asian summit in Laos. The two announced earlier in July an agreement on "concrete steps" to salvage a failing nationwide ceasefire in Syria. The February ceasefire between the regime and opposition –brokered by the U.S. and Russia – remains largely in tatters.

On Monday, the Britain-based Syrian Observatory for Human Rights said 10 civilians were killed in airstrikes on the opposition-held town of Atareb in Aleppo province. The monitoring group said the strikes, believed to have been carried out by Russian warplanes, hit several locations including a market area. Footage obtained by AFP showed a civil defense unit trying to put out a fire in the rubble of one collapsed building after the strikes, as people combed through debris. In Aleppo city, at least 12 civilians were killed in barrel bomb attacks by government forces on opposition-held neighborhoods, the Observatory said.

In the Al-Mashhad district, civil defense workers struggled to retrieve trapped survivors, an AFP journalist said. One boy was pulled out alive but the rest of his family was killed and their bodies remained under a collapsed building.

Once Syria's economic powerhouse, Aleppo has been roughly divided between government control in the west and the opposition control in the east since mid-2012.

This month regime forces seized parts of the only remaining supply route into the city's east, cutting off opposition districts and prompting food shortages and spiraling prices.

Syria has been wrecked by a five-year civil war that killed hundreds of thousands and displaced millions, leaving the country in ruins that will likely take generations to rebuild.
RELATED TOPICS