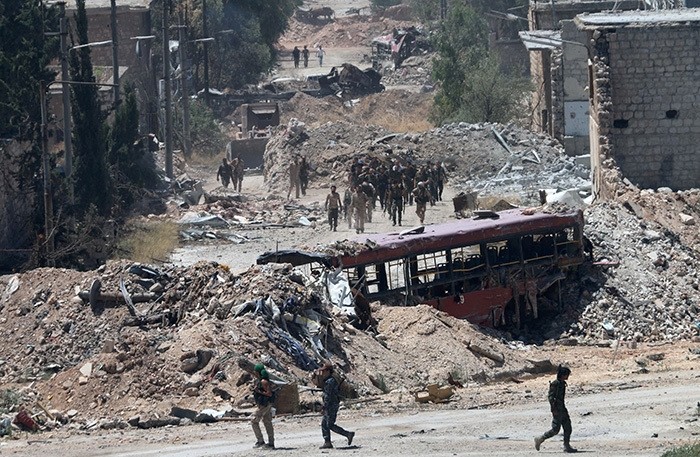 Syrian army soldiers patrol the area around the entrance of Bani Zeid after taking control of the previously rebel-held district of Leramun, on the northwest outskirts of Aleppo, on July 28, 2016. (AFP Photo)
by Compiled from Wire Services Jul 28, 2016 12:00 am

French Foreign Minister Jean-Marc Ayrault and his British counterpart Boris Johnson called Thursday for the Syrian regime and its allies to end their "disastrous" siege on the city of Aleppo.

"The ministers solemnly called upon the Syrian regime's allies to bring an immediate end to these operations which violate the truce agreed in Munich, and international law," they said in a joint statement after a meeting in Paris.

The European Union on Thursday also called for immediate humanitarian pause in fighting in eastern Aleppo to allow the delivery of medical aid to the Syrian city, ravaged by a civil war, which entered its sixth year.

EU Foreign Policy Chief Federica Mogherini and Commissioner for Humanitarian aid and Crisis management, Christos Stylianides, said in a joint statement: "the recent closure of the last remaining supply route has turned Eastern Aleppo in Syria into a de-facto besieged area, cutting off around 300,000 people from any form of vital assistance. Since 7 July, neither aid staff nor supplies have been allowed to enter."

"Without urgent humanitarian access food supplies are expected to run out over the next few weeks and Aleppo might well turn into the largest humanitarian tragedy of this conflict which has already brought so much suffering," the statement added.

In early July, regime forces moved to cut Castello road, which links the contested city of Aleppo with opposition-held Idlib, imposing a total blockade on opposition-controlled areas in Aleppo.

EU urged the international community to play its role "collectively and forcefully" to help bring a solution to the Syrian crisis.

"What we need is an immediate lifting of sieges across Syria and unhindered country-wide humanitarian access," Mogherini and Stylianides said.