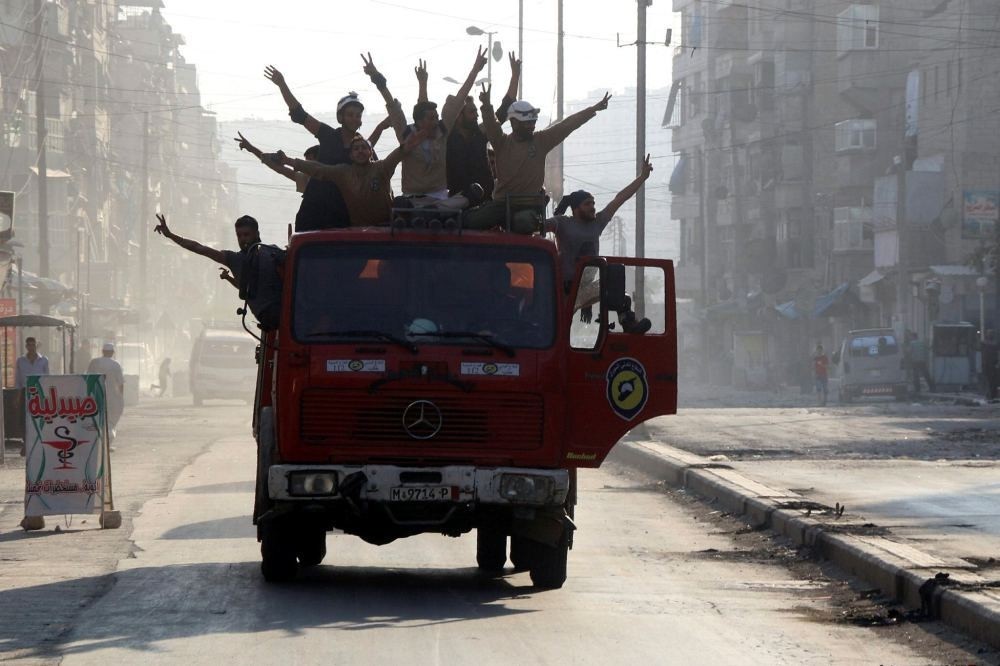 After weeks ofintense clashes and air strikes, Syrian opposition groups have succeeded in breaching the Russia-backed Syrian regime's siege. The break of the siege is considered to be a major military advance against the regime

Opposition groups breached the Syrian government siege on opposition neighborhoods in the city of Aleppo, marking a major military breakthrough that prompted an intense airstrike campaign Sunday, the opposition, residents and pro-government media reported. In a wide offensive Saturday, an alliance of opposition groups, including the Levant Conquest Front, formerly al-Qaida's branch in Syria, pushed government forces and allied fighters out of a number of military colleges, a warehouse, a bakery, a parking lot and a section of the highway in the southern Ramouseh district where fighting has raged for a week. The opposition groups hailed the breach as a major achievement after fighters besieged in the city coordinated with the Army of Conquest Alliance, which includes the former al-Qaida affiliate based in neighboring Idlib province. The group had announced it is breaking ties with the global terror network a week earlier, citing improved coordination with other opposition groups as a motive.

The war media arm of Lebanon's Hezbollah, the group fighting alongside the Syrian government, conceded the opposition's advance, adding that airstrikes leveled one of the military colleges after forces withdrew. The Levant Conquest Front posted pictures of loot from one of the military academies, the artillery school, including armored vehicles and ammunition. Syrian State news agency SANA said the government had declared that operations were still ongoing in the area. It said warplanes targeted opposition vehicles in the area Sunday.

Last month, the Syrian government seized the Castillo road, the only route into opposition-held areas in northern Aleppo, prompting a opposition counteroffensive from the city's south to attempt to break the siege. The U.N. said 300,000 people were trapped, making Aleppo one of the largest besieged areas in Syria. The government and major ally Russia had offered corridors for residents to leave opposition-held areas, an offer met with skepticism from the locals who viewed it as an attempt to depopulate the area. The opposition advance in the Ramouseh district now endangers a major highway linking the government-controlled part of Aleppo to the outside world, leaving an estimated population of 1.2 million at risk of losing a supply line. The Castillo road remains under government control but activists say it regularly comes under fire. Rami Abdurrahman, the chief of the Britain-based Syrian Observatory for Human Rights, said food prices in government-held parts of Aleppo have already gone up. He said some 700 fighters from the government and the insurgent side were killed in the week of fighting. Mohammed Khandakani, a resident of opposition-held Aleppo who accompanied the fighters to the frontline Saturday, said heavy bombing on the aeronautics school resulted in massive explosions. He suspected that the warplanes were destroying ammunition. He said clashes continued because parts of the Ramouseh district remain in government hands. A doctor in opposition-held Aleppo, Farida, who declined to give her last name out of concern for the safety of her family in government held-areas, said an intense bombing campaign is taking place inside the city. She said there were reports that one truck carrying vegetables had entered the besieged area, but said she had not seen it, suspecting the vegetables were quickly sold. She said residents have a great need for basic commodities and fuel. Several videos posted by the insurgents showed fighters besieged in Ramouseh embracing those who arrived from outside Aleppo. One opposition fighter said the operation to liberate all of Aleppo now begins. A statement by the operation room for the Conquest of Aleppo, which represents factions inside Aleppo that include Western-backed opposition groups, said that all those who decide to drop their weapons and move to opposition-controlled areas will be safe.

The Observatory group said intense fighting and heavy air strikes meant no secure corridor had yet been established between the two opposition-held territories. In another report, the Observatory said an air strike near a hospital in northwestern Syria on Saturday killed 10 people including children and damaged the hospital. July was the worst month yet for attacks on medical facilities in the war-torn country, a medical charity said, with 43 recorded attacks on healthcare facilities in Syria. The hospital is in Meles, about 15 km from Idlib city in opposition-held Idlib province. Syrian government and allied Russian warplanes operate in Syria but it was not known which aircraft carried out the strike. The Observatory, in its report on the Aleppo fighting, said opposition groups had taken control of the Weaponry College, the main Artillery College, the Air Force Technical College and the Ramousah Garage area. Government forces still control the cement factory and some military housing.
RELATED TOPICS