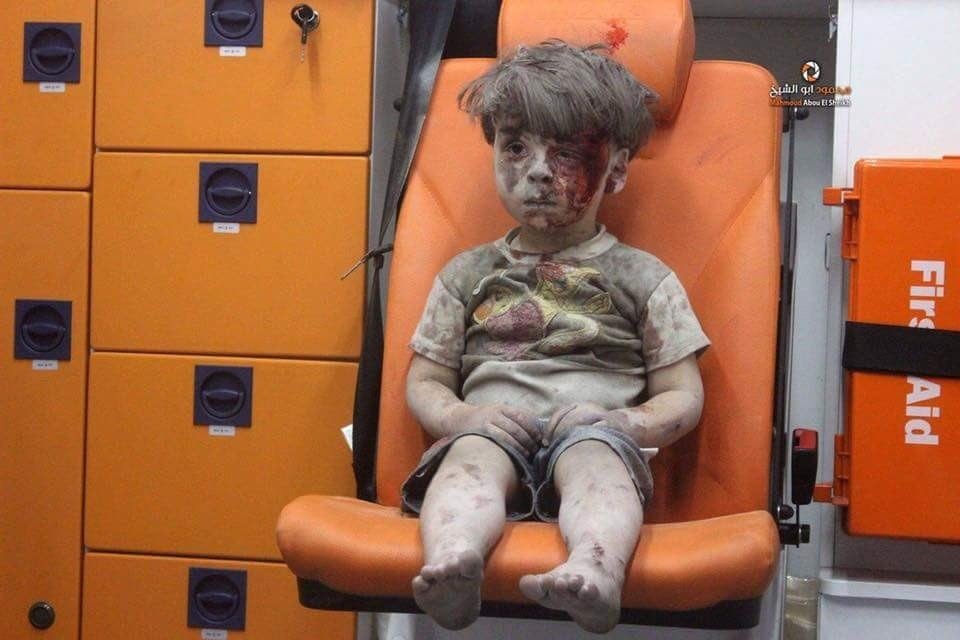 Five-year-old Omran’s face was bloodied and completely covered in dust, the little boy sits quietly, staring ahead, dazed and shocked after an apparent air strike in the Syrian city of Aleppo, showing the devastation in the city

Syrian opposition activists have released haunting footage showing a young boy rescued from a partially destroyed building in the aftermath of a devastating airstrike in Aleppo. The image of the stunned and weary-looking boy, sitting in an orange chair inside an ambulance, covered in dust and with blood on his face, encapsulates the horrors inflicted on the war-ravaged northern city. Photographs of the boy were widely shared on social media. An hour after his rescue, the building the boy was in completely collapsed. The fighting has frustrated the U.N.'s efforts to fulfill its humanitarian mandate, and the world body's special envoy to Syria on Thursday cut short a meeting of the ad hoc committee, chaired by Russia and the United States, tasked with deescalating the violence so that relief can reach beleaguered civilians. The U.N. envoy, Staffan de Mistura, said there was "no sense" in holding the meeting in light of the obstacles to delivering aid. The U.N. is hoping to secure a 48-hour pause in the fighting in Aleppo.

A doctor in Aleppo on Thursday identified the boy as 5-year-old Omran Daqneesh. Osama Abu al-Ezz confirmed the boy was brought to the hospital known as "M10" on Wednesday night, following an airstrike on the opposition-held neighborhood of Qaterji with head wounds, but no brain injury, and was later discharged. Rescue workers and journalists arrived at Qaterji shortly after the strike and began pulling victims from the rubble. "We were passing them from one balcony to the other," said photojournalist Mahmoud Raslan, who took the memorable photo. He said he had passed along three lifeless bodies before someone handed him the wounded boy. Raslan rushed him to the ambulance, he said. A doctor at M10 later reported eight dead, among them five children. The strike occurred during the sunset call to prayer on Wednesday evening, said Raslan, a correspondent for Al Jazeera Mubashir. Omran was rescued along with his three siblings, ages 1, 6, and 11, and his mother and father from the rubble of their partially destroyed apartment building, according to Raslan. None sustained major injuries, but the building collapsed one hour after the family was rescued. A second building, next to theirs, was also heavily damaged.

Rescue workers worked until 5 a.m. to retrieve a final victim from the rubble. The victim, who was not identified, survived. "We sent the younger children immediately to the ambulance, but the 11-year-old girl waited for her mother to be rescued. Her ankle was pinned beneath the rubble," Raslan said. In the video posted late Wednesday by the Aleppo Media Center, a man is seen plucking the boy away from a chaotic nighttime scene and carrying him inside the ambulance, looking dazed and flat-eyed. The boy then runs his hand over his blood-covered face, looks at his hands and wipes them on the ambulance chair. Doctors in Aleppo use code names for hospitals, which they say have been systematically targeted by government airstrikes. Abu al-Ezz said they do that "because we are afraid security forces will infiltrate their medical network and target ambulances as they transfer patients from one hospital to another."

Activists living in opposition areas rely on informers in the government-controlled Latakia province to warn residents of impending airstrikes. On Wednesday evening, an informant in Latakia informed activist networks that a jet had taken off from the Russian air base at Hmeimim. "We expected the plane to arrive in Aleppo airspace in two minutes, and sure enough it did," said Raslan. "It struck twice." No one was injured in the first strike, said Raslan. The second one turned Omran's life upside down. The horror generated by the image of Omran in the orange chair echoes the anguished global response to the pictures of Aylan Kurdi, the drowned Syrian boy whose body was found on a beach in Turkey and came to encapsulate the horrific toll of Syria's civil war.

Aleppo, split into opposition- and government-controlled areas, has become the focus of fighting in Syria's five-year conflict. Opposition-held areas are suffering heavy air strikes daily as pro-government forces try to retake territory lost to opposition fighters two weeks ago in the southwest of Aleppo.