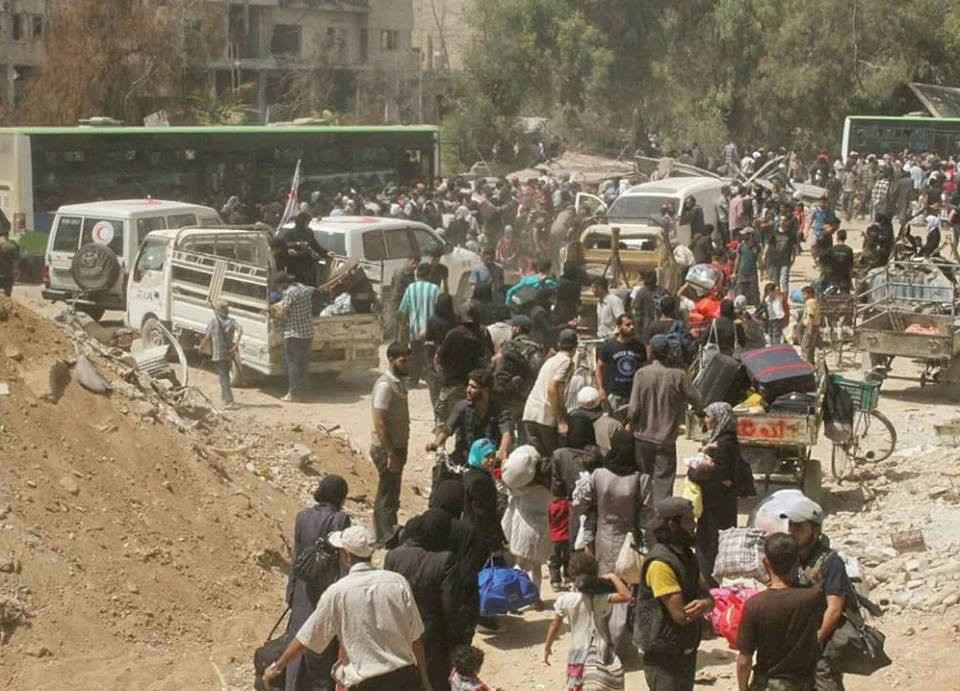 People gather before being evacuated from the besieged Damascus suburb of Daraya. (Sanaa via Reuters)
by German Press Agency - DPA Aug 26, 2016 12:00 am

The first busses carrying local residents and rebel fighters left the Damascus suburb of Daraya on Friday under a deal that will see the area evacuated after a four-year-long siege by government forces.

The UN's Syria envoy, Staffan de Mistura, called on Syria's ally Russia and the United States to ensure that the evacuees could leave freely and safely.

"The world is watching," de Mistura said, appealing to Washington and Moscow to ensure that no war crimes or human rights violations were committed during or after the evacuation.

Pro-government al-Mayadeen television showed jubilant regime fighters chanting in praise of regime leader Bashar al-Assad on the outskirts of the town as busses and ambulances carried the evacuees out.

The Syrian opposition reacted bitterly to the evacuation, saying that the international community had failed the people of Daraya.

The town only received its first food aid shipment in June, after four years of a siege imposed by government forces. Shortly afterwards, it was hit by government airstrikes that, according to local activists, prevented the food being distributed immediately.

The town's residents were suffering from severe shortages and malnutrition prior to the aid deliveries, according to local activists.

"Daraya did not fail today," George Sabra of the opposition peace talks team told dpa. "It was the international community who failed, and failed the people of Daraya."

The Syrian government has now regained control or negotiated local truces in much of the Damascus hinterland that fell into rebel hands earlier in the five-year conflict.

The evacuation of Daraya will help it secure the Mezzeh military airport, one of the capital's key strategic facilities.

But the opposition charges that many of the government gains in the region have been won by siege and starvation tactics, with opposition districts forced to surrender or sign local truces in order to gain supplies.

According to the UN, some 600,000 people are currently under siege in Syria. Most of them are in opposition-held areas besieged by government forces.

The figures do not include Aleppo in northern Syria, where up to 2 million are at risk of siege after government and rebel forces cut through each others' supply lines around the divided city.

The Daraya deal is due to see some 3,500 rebel fighters and their families bussed from Daraya to the rebel-held city of Idlib in north-western Syria, according to a member of the government negotiating team.

Another 4,000 civilians will be transported to other areas of Damascus, leaving what will amount to a ghost town in the hands of the government.

The fate of civilians trapped in Aleppo meanwhile topped the agenda at Friday talks between US Secretary of State John Kerry and Russian Foreign Minister Sergei Lavrov in Geneva.

The two top diplomats discussed a 48-hour silence of arms in Aleppo, sought urgently by the United Nations to help tens of thousands of people trapped between government and rebel forces.

Kerry and Lavrov also plan to seek ways towards a country-wide ceasefire, in an effort to restart UN-brokered talks involving the US-backed rebels and the government, which has been getting support from Russian forces.