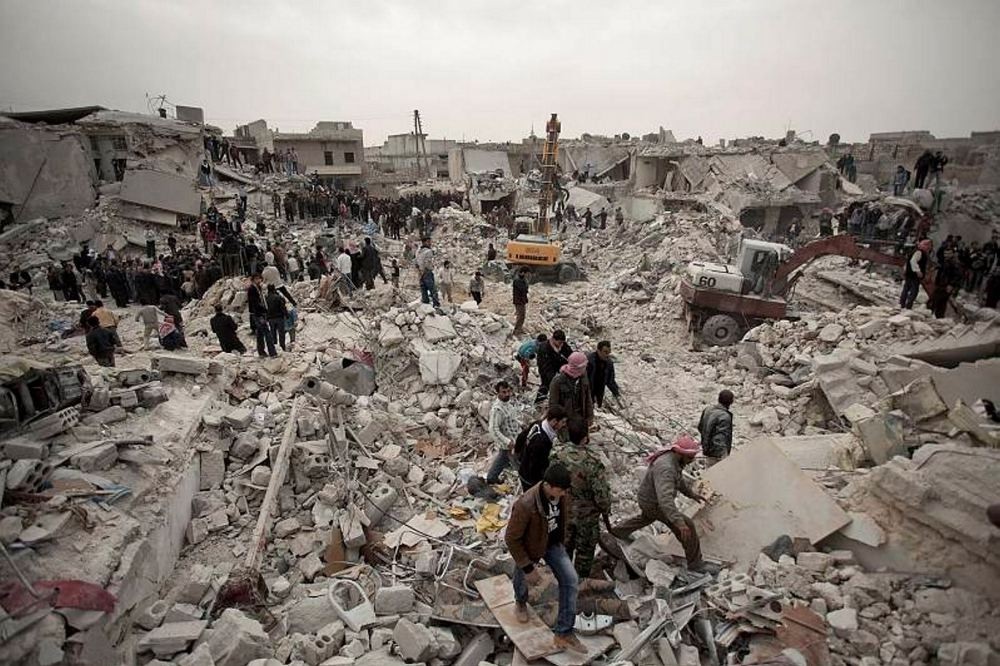 Syrians searching for survivors and bodies amid the rubble of buildings in the Tariq al-Bab district of the northern city of Aleppo. (AFP Photo)
by Daily Sabah with Wires Sep 03, 2016 12:00 am

As DAESH loses ground in Aleppo province, the race to seize the last major city controlled by DAESH in the province, al-Bab, has intensified between three competing anti-DAESH factions

The last major city held by DAESH in Aleppo province, al-Bab, has turned into a battleground as three anti-DAESH factions initiate a race to capture the strategic city. As DAESH faces expulsion, the Turkey-backed Free Syrian Army (FSA), the Syrian Democratic Forces (SDF) and regime forces all have the goal of seizing the strategic city.

The Kurdish People's Protection Units (YPG) launched its advance from its Afrin Canton in northwestern Syria and seized the villages of Harbu in order to build a corridor between their disconnected enclaves, according to local media. The SDF has reportedly been 25 kilometers away from al-Bab. However, regime forces are geographically closest to al-Bab. The SDF is largely controlled by the YPG - the armed units of the Democratic Union Party (PYD) - which functions as the Syrian branch for the internationally designated PKK terrorist organization.

Abu Muhammad al-Adnani, one of DAESH's most prominent leaders, is thought to have been killed in a U.S. airstrike near the area of al-Bab this week. He is supposedly DAESH's propaganda chief, top recruiter and the reported mastermind of a string of group claimed attacks in the West. Both Washington and Moscow claimed credit for Adnani's death. In Washington, the Pentagon said U.S.-led coalition forces had targeted Adnani in an airstrike in Syria's Aleppo province on Tuesday but did not immediately confirm his death. Russia's military said one of its strikes had killed Adnani in a bombing raid Tuesday that left up to 40 DAESH militants dead, a claim dismissed by U.S. officials as "a joke." Regardless of who was responsible, analysts say his death will be a major blow to DAESH, which has suffered a series of setbacks this year including territorial losses in Syria and Iraq and the killings of other top figures.

Meanwhile, opposition groups captured new ground in a lightning advance on the central city of Hama and regime airstrikes killed 25 civilians in the surrounding province on Thursday. According to reports from local media, a Daraya-style agreement has been reached in al-Waer in Homs. Some 500 opposition fighters with families will reportedly be evacuated towards Idlib and the town will be transferred to the Syrian regime forces. The agreement between the regime and the opposition had already seen thousands of civilians and opposition fighters leave the town of Daraya, southwest of the capital, after a four-year government siege.

Russian President Vladimir Putin said in an interview aired Friday that Moscow and Washington could reach a cooperation deal on Syria soon. "In my opinion we're gradually heading in the right direction and I do not exclude that we will be able to agree on something in the near future and present our agreements to the international community," Putin said in an interview with Bloomberg News, the AFP news agency reported.

The U.N. Security Council will hold a high-level meeting on Sept. 21 to take stock of the Syrian conflict and discuss prospects for ending the fighting, which is now in its sixth year. New Zealand's U.N. Ambassador Gerard van Bohemen, whose country holds the council presidency, said members are expected to discuss the "political initiative" that U.N. envoy Staffan de Mistura is preparing to help revive the stalled Syria peace talks.
RELATED TOPICS