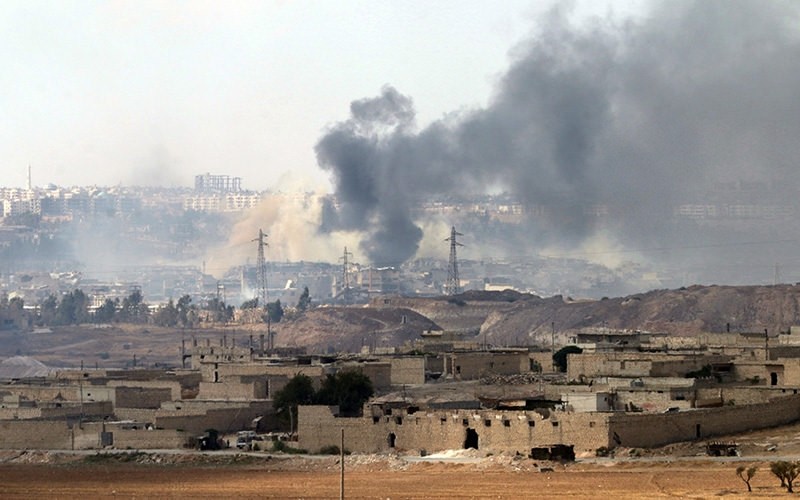 Smoke billows on September 4, 2016 from a location on the southern outskirts of the Syrian city of Aleppo after regime forces retook control of three military academies from opposition fighters. (AFP Photo)
by Compiled from Wire Services Sep 05, 2016 12:00 am

Syrian regime forces and allied militias recaptured areas in southwestern Aleppo on Sunday that opposition fighters had seized last month and laid siege to the city's opposition-held eastern sector for a second time since July after retaking control of three military academies from the opposition on Sunday. The battle for Syria's second-biggest city Aleppo is of great significance to all sides due to its enormous strategic and geographic importance and will likely determine the country's fate.

After the Artillery Academy was captured by the Syrian regime in southern Aleppo on Sunday, the regime forces expanded their control in the area of military academies and targeted hilltops located near the strategic military installation, which paved the way for the surrounding of the strategic Ramousa district and the southern sector of the 1070 Al-Hamdaniyah Housing Project. The latest offensive by the Syrian regime has led to opposition supply lines being cut in the city. According to local sources, the Russian Air Force's nonstop airstrikes also helped the Syrian regime and the allied militias renew its siege.

"The city is now under siege again," one of the sources told Anadolu Agency (AA). Last month, opposition forces managed to break a crippling regime blockade on several districts of Aleppo. According to sources, clashes remain ongoing in the city as opposition fighters try to push regime troops back from their positions. If the Syrian regime gains complete control of Aleppo, this would be a major blow for the opposition as the last fighting factions in Syria are defeated.

The Syrian Observatory for Human Rights, a Britain-based monitor, said regime forces backed by Russian air strikes had now severed the alternate route into the opposition-held east that fighters opened up in August. "The army took control of the artillery academy, so they control all the academies, and the eastern neighborhoods are under a full siege," said Observatory director Rami Abdel Rahman.

In a related development, three civilians were killed Sunday when regime helicopters dropped a number of barrel bombs on opposition-held parts of the city, according to local civil defense sources. "Three civilians were killed and another 20 were injured in Sunday's attacks," the sources, who insisted on anonymity due to security concerns, said. Barrel bombs are improvised explosive devices packed with shrapnel and explosive material. Usually dropped from army helicopters, the low-cost munitions are believed to have killed thousands of people since the Syrian conflict began more than five years ago.

Meanwhile, at least 38 people were killed in a string of bombings inside Syrian regime territory, state media reported Monday. The Britain-based Syrian Observatory for Human Rights monitoring group, which maintains a network of contacts inside the country, put the death toll at 47. The SANA news agency reported blasts in the coastal city of Tartus, the central city of Homs, the suburbs of the capital Damascus, and the northeastern city of Hasakeh.

Syria has been locked in a vicious civil war since early 2011, when the Assad regime cracked down on pro-democracy protests - which erupted as part of that year's "Arab Spring" uprisings --with unexpected ferocity and disproportionate force. Since then, more than a quarter of a million people have been killed and more than 10 million displaced across the war-battered country, according to the U.N.

Regime forces had been advancing in southern Aleppo for days, with the fighting already creating shortages for the estimated 250,000 people living in the rebel-held parts of the city.

Zakaria Malahifji of the Fastaqim rebel group confirmed reports that the complex had been retaken by government forces. That place eastern Aleppo under siege, he said.

Bashar al-Assad, who is backed by Russia, Iran and Hezbollah, wants to recapture all of Aleppo, Syria's biggest city before the five-year-old conflict.

It has been roughly divided between rebel control in the east and government control in the west since mid-2012, and in recent months regime troops have gradually surrounded the city.

On July 17, they severed the only remaining route into the opposition-held east, the key Castello Road running down from the border with Turkey.

The road's capture led to shortages of food and fuel in the eastern neighborhoods, and prompted international concern, including calls for 48-hour ceasefires to allow aid to enter.

On August 6, opposition forces including Al-Qaeda's former Syrian affiliate Nusra Front pushed regime forces back from a key route south of the city, creating a lifeline back into the east.

While the reopening of the road allowed some goods into the city, it was inaccessible to most aid agencies, and negotiations to secure a route in for assistance have yet to succeed.

Moscow's intervention last year turned the war in Assad's favor in many areas, but opposition fighters have made some gains, including in Aleppo and in Hama province, further south.

Insurgents have launched a campaign to try and capture the town of Maan, north of the city of Hama, the provincial capital, according to Mohammed Rasheed, a spokesman for opposition group Jaish al-Nasr.

Advances by the insurgents in recent days have brought them to within 10 km (six miles) of government-controlled Hama.