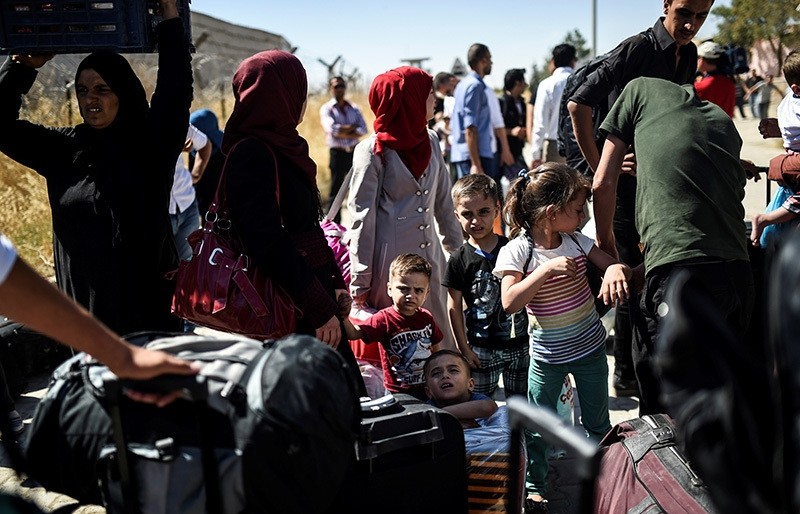 Syrian refugees on their way back to the Syrian city of Jarablus on Sept. 7 at the Karkamu0131u015f crossing gate, in the southern region of Turkeyu2019s Kilis province. (AFP Photo)
by Daily Sabah with Reuters Sep 07, 2016 12:00 am

A group of 292 Syrians have returned to the Syrian town of Jarablus on Wednesday, marking the first formal civilian returns from Turkey since the start of a Turkish-backed Operation Euphrates Shield into northern Syria, a Turkish regional official said.

Jarablus, which had been held by DAESH for a long time, was the first town captured by the Turkish-backed Free Syrian Army (FSA) fighters in the offensive launched on Aug. 24. Turkey, which hosts nearly three million Syrian refugees, has said it wants provide a safe zone for civilians to return to Syria.

"The formal returns have begun today. We wouldn't consider anything before that as formal passage. This is the first time since the operation began," a spokesman at the governor's office for Turkey's southeasten province of Gaziantep, which lies across the border from Jarablus, told Reuters. He said more would return gradually.

Turkey launched Operation Euphrates Shield on Aug. 24 in cooperation with the U.S.-led anti-Daesh coalition to clear terrorist groups from Turkey's borders. So far, Turkey-backed FSA units captured the town of Jarablus and dozens of villages located west of the Euphrates River.