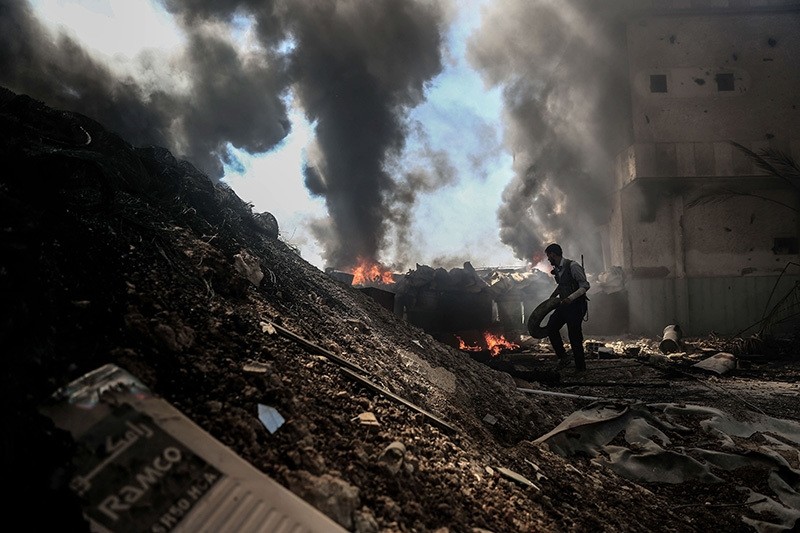 | AFP Photo
by Anadolu Agency Sep 07, 2016 12:00 am
Bashar al-Assad must be ousted as part of any peace deal in Syria, Boris Johnson has said in his first public remarks on the issue since becoming U.K. foreign secretary.

Johnson said it was the Syrian president's "killing machine, his barrel bombs and, in the end, his fight for personal political survival" that had caused the 400,000 deaths estimated by the United Nations in the country.

He added "even" Russia accepted the need for transition in Syria's political leadership.

Johnson made the comments in a newspaper column published ahead of meeting in London on Wednesday of the Syrian High Negotiations Committee, which represents opposition groups in Syria.

He wrote in The Times: "There will be people meeting in London who have direct experience of running Syria but who utterly reject the Assad-style police state. They want to create a new country in which there are checks and balances in government and in which the rights of women and minorities are respected.

"Their ambition is to ensure a safe space, free from terror, to which migrants can return. Above all, the High Negotiations Committee does not represent the victory of one sectarian group over another or the transfer of power from one faction in Syria to another."

Johnson said the case for political transition in Syria was so widely held that "even the Russians have accepted it".

But, he said, they were still keeping Assad in power because of concerns over what happens after he leaves.

"First there is to be a six-month negotiating phase between the regime and the opposition, accompanied by a total cease-fire and full humanitarian access across the country," he wrote.

"Next there is to be an 18-month period in which Syria is to be governed by a transitional body. This, crucially, would be a mixture of opposition figures and representatives of the current government and of civil society."

His comments came just months after he wrote a Daily Telegraph column in March 2016, when he was still London mayor, praising Assad and Russia for liberating the ancient city of Palmyra from Daesh.
Last Update: Sep 07, 2016 7:36 pm
RELATED TOPICS