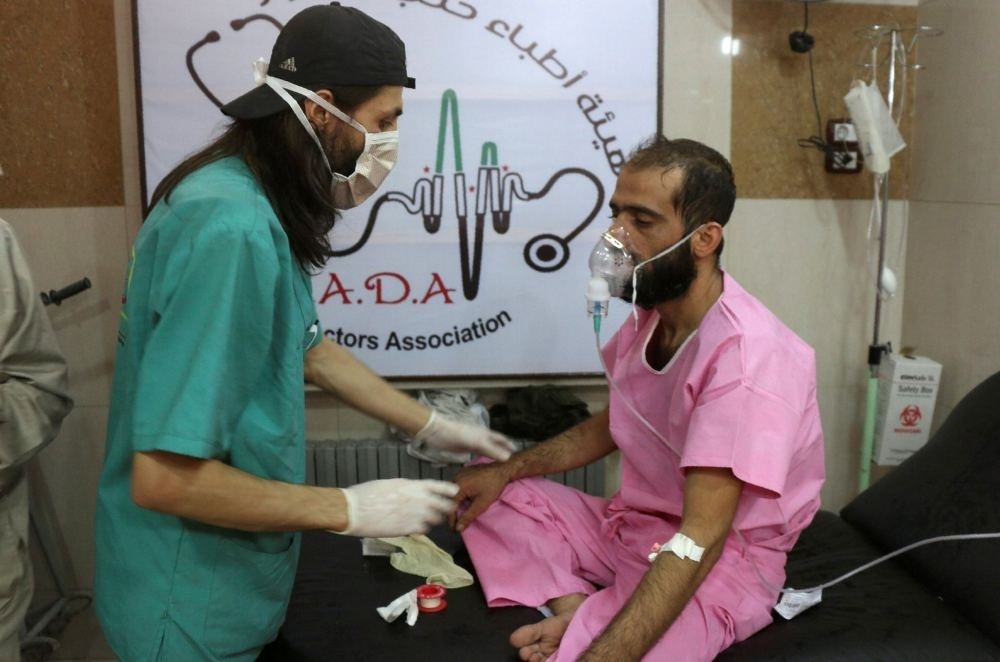 by Compiled from Wire Services Sep 08, 2016 12:00 am
Assad forces on Wednesday struck two opposition-held areas by chlorine gas bombs in the capital of Damascus. Regime aircraft dropped barrel bombs laced with chlorine gas on the Damascus suburbs of Ein Tarma and Jobar, reported by the Anadolu Agency (AA). One person was killed and seven people suffered temporary asphyxia in the attack, the sources added anonymously due to safety concerns. According to the sources, the victims suffered symptoms of chlorine exposure as vomiting and breathing difficulties.

Also, the Syrian Civil Defense, a rescue workers' organization operates in opposition-held areas stated that Assad forces helicopters had dropped barrel bombs containing chlorine on the Sukari neighborhood in eastern Aleppo on Tuesday. The Syrian regime has denied previous accusations it used chemical weapons during the five-year-old civil war. The Syrian army could not be immediately reached for comment on the latest allegations. The Civil Defense said on its Facebook page that 80 people had suffocated. It reported no deaths. It posted a video showing wheezing children doused in water using oxygen masks to breathe.

The British-based Syrian Observatory for Human Rights, which tracks Syrian violence using sources on the ground, said medical sources had reported 70 cases of suffocation. A United Nations and Organization for the Prohibition of Chemical Weapons inquiry seen by Reuters last month found that Syrian government forces were responsible for two toxic gas attacks in 2014 and 2015 involving chlorine.

The Civil Defense accused the government of two other suspected chlorine gas attacks in August. The United Nations Commission of Inquiry on Syria said it was investigating an August incident.

The Civil Defense have lost over 137 personnel in the line of duty, many in "double tap" attacks, where warplanes strike targets twice to maximize casualties as crowds gather.

Aleppo has been one of the areas hardest hit by escalating violence in recent months after the collapse of a partial truce brokered by the United States and Russia in February. Assad forces put eastern Aleppo under siege on Sunday for a second time since July after advancing against opposition on the city's outskirts. The city has long been divided between Assad forces and opposition areas of control.

The Syrian conflict has killed more than 250,000 people and forced more than 11 million from their homes.
RELATED TOPICS