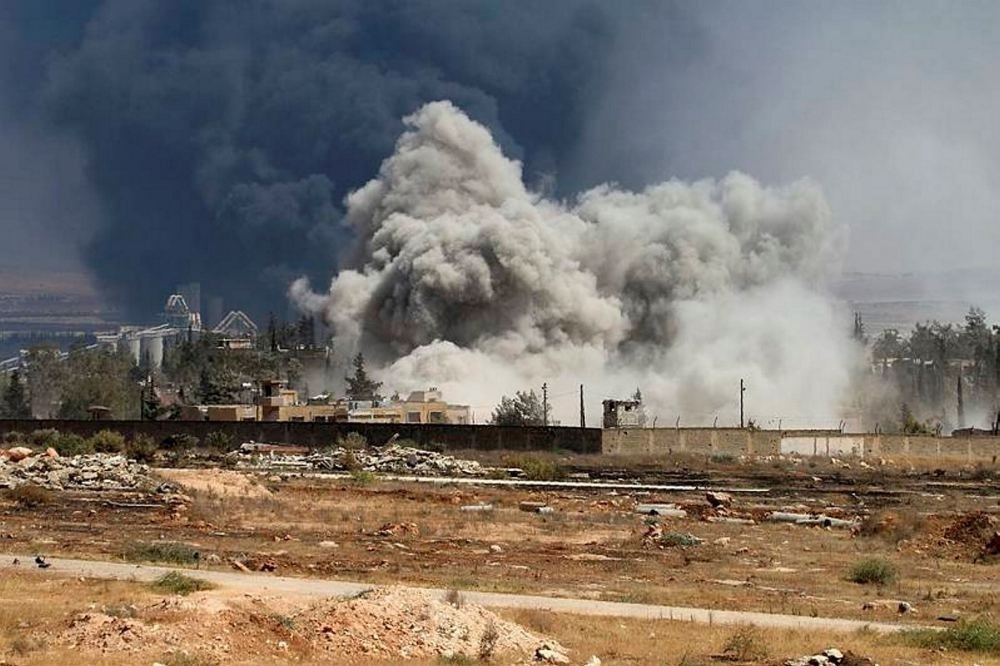 Smoke billows following airstrikes by Assad forces on opposition positions during intense fighting in Aleppo.
by Daily Sabah with Wires Sep 08, 2016 12:00 am

Syria's second biggest city, Aleppo, has become the top strategic point that will determine Syria's fate, as opposition group reinforcements have poured into the southern part of the area to break Assad's renewed siege

The Ramousa offensive by the Syrian regime forces aims to strengthen the buffer zone around their main supply route that feeds into Aleppo from the southern countryside of the province. These forces' advancement in the Ramousa district and the Al-Amiriyah neighborhood of Aleppo city would lead to the reopening of the southern supply line to western Aleppo.

After the Artillery Academy was captured by the Syrian regime in southern Aleppo on Sunday, the regime forces expanded their control in the area of military academies and targeted hilltops located near the strategic military installation, which paved the way for the surrounding of the strategic Ramousa district and the southern sector of the 1070 al-Hamdaniyah Housing Project. The latest offensive by the Syrian regime has led to opposition supply lines being cut in the city.

Fighting in Syria's western Hama province displaced an estimated 100,000 people over eight days between late August and early September, the United Nations said on Wednesday, citing the Syrian Arab Red Crescent and the governor of the province. Many people had fled from the fighting towards Hama city and neighboring villages, as well as north into the Idlib province, the U.N. said.

The opposition groups launched an offensive last week in northern Hama, an area of strategic importance to President Bashar al-Assad that is home to loyalist towns populated by minority Christians and Alawites. The opposition rapidly captured the town of Halfaya. Assad forces have hit back with heavy air strikes. There were originally about 4,500 families in the town of Halfaya, of which 2,800 remain trapped by the fighting while the rest managed to flee, the U.N. report said. Another 4,500 families were displaced from Taybat al Imam, out of 9,500 in that town, and 5,000 families were uprooted from the army stronghold of Soran, about half the population there. Many of the displaced people were sleeping outdoors, but four mosques in Hama city and 12 schools in rural areas were temporarily housing people, the U.N. said. OCHA said the United Nations has sent an "inter-agency convoy with life-saving supplies to Hama" and was evaluating the humanitarian situation. An estimated 11 million Syrians have fled their homes since the outbreak of the civil war, now in its sixth year. Of those, 4.8 million are refugees outside the country, with nearly 7 million displaced internally.

A group representing Syria's opposition has unveiled plans for a political transition designed to bring an end to the ruinous civil war, calling for the departure of President Bashar al-Assad after six months and for elections to be held after two years. The High Negotiations Committee plan presented in London Wednesday calls for a full cease-fire to take effect as six months of negotiations begin with Assad's government. The goal is to develop a signed agreement on the "basic principles" of the transition process. HNC chief Riad Hijab says this would be followed by the establishment of a transitional governing body and the departure of Assad "and his clique." He says after 18 months there should be U.N.-supervised elections.
RELATED TOPICS