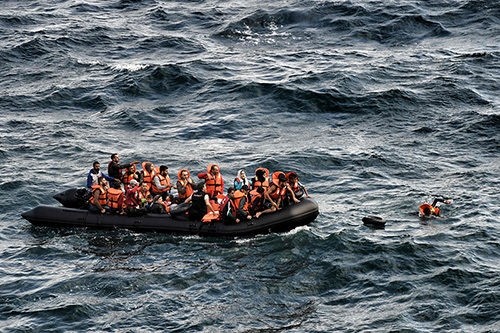 More than 500 refugees were prevented from crossing into Greece from Turkey last week, a border security source said Saturday.

The source, speaking on the condition of anonymity due to restrictions on discussing operations with the media, said 534 refugees were apprehended across Edirne province, which also borders Bulgaria, between Sept. 2 and 9.

The refugees, from Syria, Pakistan, Iraq, Palestine, Afghanistan, Iran, Algeria, Tunisia and Bangladesh, were detained as they attempted to cross into Greece illegally, the source added.

They were taken to Edirne detention center to face possible deportation to their home country.

Over the past year, hundreds of thousands of people have made the short but perilous journey in a bid to reach Northern and Western Europe in search for a better life.

Of the more than 1.1 million migrants who arrived in the EU last year, more than 850,000 arrived by sea to Greece from Turkey, according to the International Organization for Migration and 805 people died on the Aegean Sea in 2015.