90 civilians killed in airstrikes on opposition areas after US, Russia agree to ceasefire 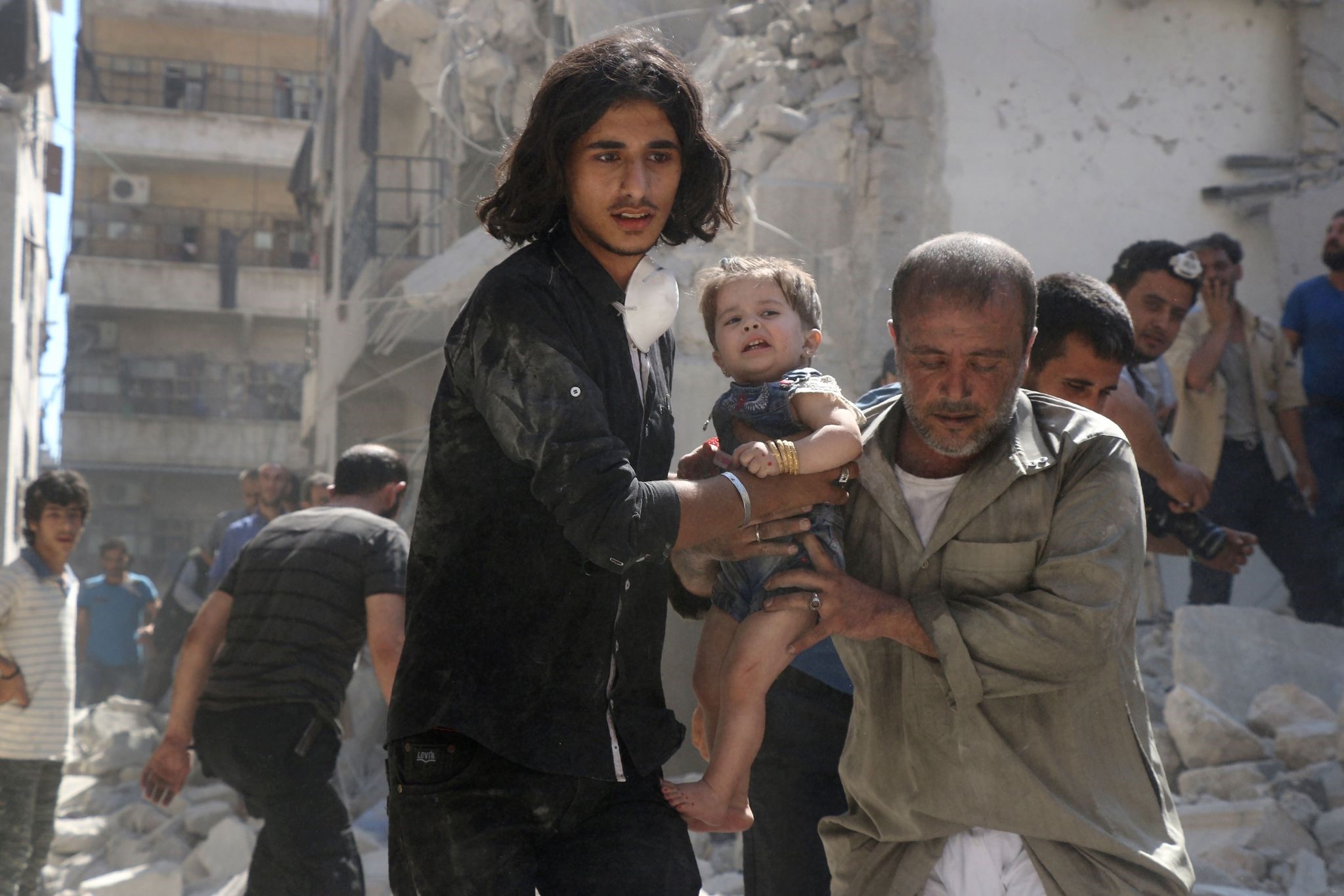 A Syrian civil defence member and a volunteer carry a little girl rescued from under the rubble of destroyed buildings in Aleppo, on September 10, 2016. (AFP Photo)
by German Press Agency - DPA
Sep 11, 2016 12:00 am

At least 90 civilians, including 22 children have been killed in airstrikes by unidentified jets against opposition-held areas in northern Syria, shortly after the United States and Russia sealed an ambitious agreement aimed at reducing violence in the country and relaunching a UN-sponsored peace process.

The deadliest strikes were in Idlib, capital of the province of the same name, where they targeted a market, leaving 58 civilians including 13 children dead, the Syrian Observatory for Human Rights said.

Two more civilians were killed in airstrikes against rebel-controlled areas in the town of Jisr al-Shughur in the same province.

At least 30 civilians, including nine children, were killed in air bombardment of opposition-held areas in Aleppo and its western outskirts, according to the observatory.

The airstrikes in Idlib and Aleppo are believed to have been mounted by government jets or those of allied Russia.

Aleppo, a major battleground in Syria's conflict, has seen intensified fighting between government forces and the opposition in recent months, worsening the humanitarian situation there.

Activist Yasin Abu Raed, who is based in opposition-held eastern Aleppo, said the situation inside the local hospitals there is "miserable."

"Most of the injured are in critical conditions due to severe injuries they have sustained and a shortage of surgeons," Abu Raed told dpa via Facebook message.

The surge in violence came hours after the US and Russia's top diplomats announced the agreement after more than 12 hours of talks in Geneva.

The accord includes a truce to start across Syria at sunset Monday, the first day of the Muslim Eid al-Adha festival.

US Secretary of State John Kerry, emerging late Friday in Geneva from talks with Russian Foreign Minister Sergei Lavrov, said the deal could provide a "turning point" in Syria's conflict if the parties implement it "in good faith."

Russia is a major ally of Syrian regime leader Bashar al-Assad, while the US is supporting opposition forces fighting to oust him.

Syria's state news agency SANA said that the Geneva agreement had been reached "with full knowledge" of the Syrian government, which has approved it.

The Syrian opposition reacted with caution to the pact.

The High Negotiations Committee (HNC), an opposition umbrella coalition, welcomed the agreement but called on Russia to pressure al-Assad's regime to comply with the deal.

"We hope this will be the beginning of the end of the civilians' ordeal," HNC member Bassma Kodmani said. "We welcome the deal if it is going to be enforced. What if Russia doesn't pressure the regime, because that is the only way to get the regime to comply? We are waiting with a lot of anxiety."

In February, the US and Russia brokered a ceasefire that held for some time in most parts of Syria.

Later, the truce collapsed under pressure from localized fighting and a failed UN-backed political process to end the violence.

German Foreign Minister Frank-Walter Steinmeier welcomed the new agreement between Washington and Moscow, describing their negotiations as a difficult process "due to differing interests."

"If the ceasefire is successfully implemented nationwide, then this is a real, new chance for the humanitarian access so urgently required for hundreds of thousands of people in need," Steinmeier said.

It soon spiralled into a full-blown war that has claimed more than 250,000 lives, according to activists' estimates.