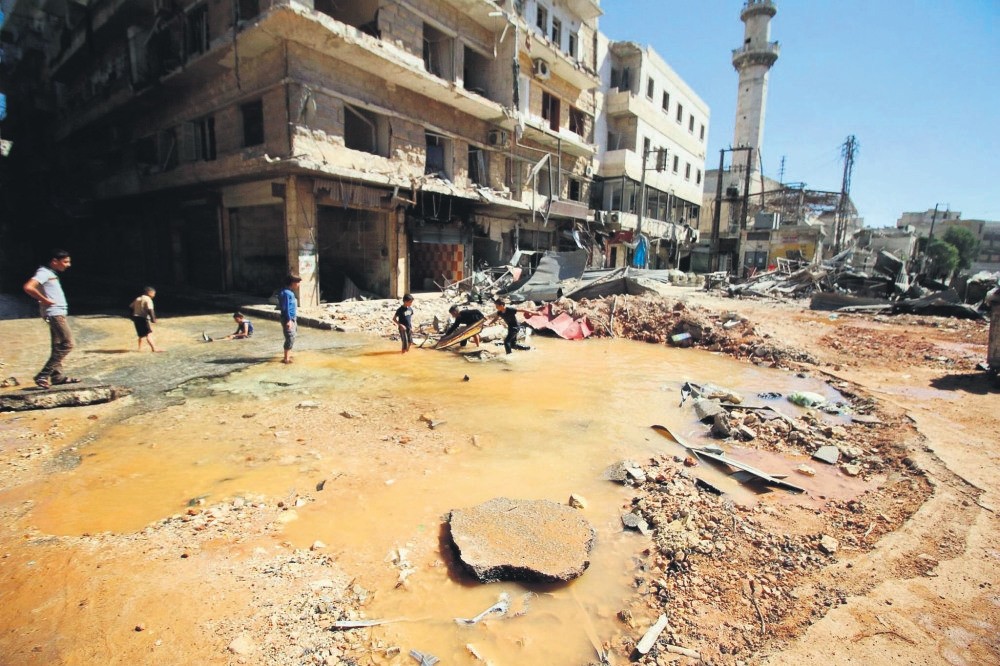 Children play with water from a burst water pipe at a site hit by an airstrike in Aleppo's opposition-controlled al-Mashad neighborhood, Syria, Sept. 30.
by Compiled from Wire Services Oct 01, 2016 12:00 am

Despite the U.S.'s warning of ending Syria talks, Moscow rejected claims that talks on Syria are still working. U.S.-Russian tension remains as Russia announced itwill continue to back Assad forces

Amid the humanitarian catastrophe unfolding in Syria's brutal five-year war, the tension between the United States and Russia has been increasing its bombing of Aleppo. The United States warned Thursday that it is on the brink of ending talks with Russia over Syria.

Russia has reinforced its air base in Syria with several bombers and is ready to send ground attack aircraft as it intensifies support for Syrian government troops after the collapse of a ceasefire plan, Russia's Izvestia daily reported on Friday.

A group of Su-24 and Su-34 frontline bombers have already arrived at the Hmeymim base, Izvestia wrote, quoting an unnamed military official. "If need be, the air force group will be (further) built up within two to three days," he said. "Su-25 ground attack fighters designated to be sent to Hmeymim have already been selected in their units and their crews are on a stand-by, awaiting orders from their commanders."

Diplomacy collapsed this week with the U.S. threatening to end all Syria-related cooperation unless the bombardment of Aleppo stopped and Russia responded that the U.S. was encouraging violent attacks on Russian assets.

Russia rejected a claim by a Syria monitoring group on Friday that its airstrikes have killed about 10,000 people in the Middle Eastern country in the past year. "We do not consider information about what happens in Syria from an organization based in Britain to be reliable," Kremlin spokesman Dmitry Peskov said in comments carried by state media. The Britain-based Syrian Observatory for Human Rights said Friday that Russian airstrikes in Syria have killed about 10,000 people, including almost 4,000 civilians. The death toll includes more than 900 children, the Observatory said.

Russia has maintained that the purpose of its bombing campaign in Syria is to eradicate militant organizations that have amassed significant territory in the war-torn country in recent years. However, Russia has been accused of targeting relatively moderate opposition groups endangering Assad's regime. "You can speculate as much as you want, but the goal is to fight international terrorism," Russian Foreign Ministry spokeswoman Maria Zakharova said Friday, in comments carried by state media.

After the collapse of the ceasefire brokered by the United States and Russia, fighting in Syria's besieged eastern Aleppo has killed 338 people in the past few weeks, including 106 children, and 846 have been wounded, including 261 children, a World Health Organization official said on Friday. "We are asking for four things: stop the killing, stop attacks on health care, let the sick and wounded out and let the aid in," Rick Brennan, WHO's head of emergency risk management and humanitarian response, told a U.N. briefing in Geneva. "The situation really is unfathomable."
RELATED TOPICS