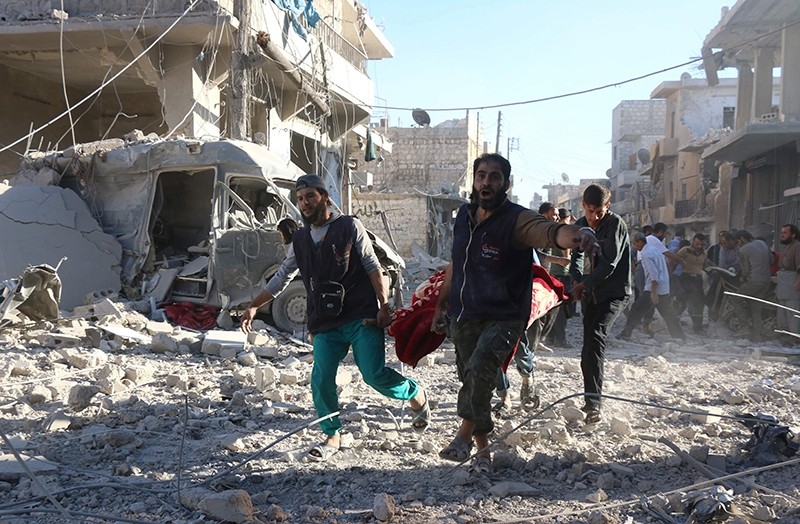 Syrian volunteers carry an injured person on a stretcher following Syrian regime forces airstrikes on the neighbourhood of Heluk in Aleppo, on September 30, 2016. (AFP Photo)
by Oct 03, 2016 12:00 am

The largest hospital in opposition-held parts of Syria's Aleppo was "completely destroyed" in airstrikes on Monday, the medical organization that supports it said.

The M10 hospital was "completely destroyed... It is gone," said Adham Sahloul of the Syrian American Medical Society, adding that three maintenance workers were killed in the airstrikes.

"The hospital is now not usable at all. It is not salvageable, per reports from the staff and doctors there," Sahloul said.

Doctors at M10 were afraid that its upper levels would collapse onto the underground floors, he said.

The Syrian Observatory for Human Rights monitoring group confirmed that the hospital was destroyed after "being directly targeted by air raids".

M10 was hit multiple times over the past week, sparking international outrage over indiscriminate attacks on civilian infrastructure in battered Aleppo.

The top United Nations aid official said on Sunday Aleppo's health care system "is all but obliterated. Medical facilities are being hit one by one."

Backed by Russian warplanes, the Syrian regime's army is pressing a ground offensive to take opposition-held parts of the northern city.

M10 is a hospital codename used by doctors in opposition-controlled territory in Aleppo for security reasons.