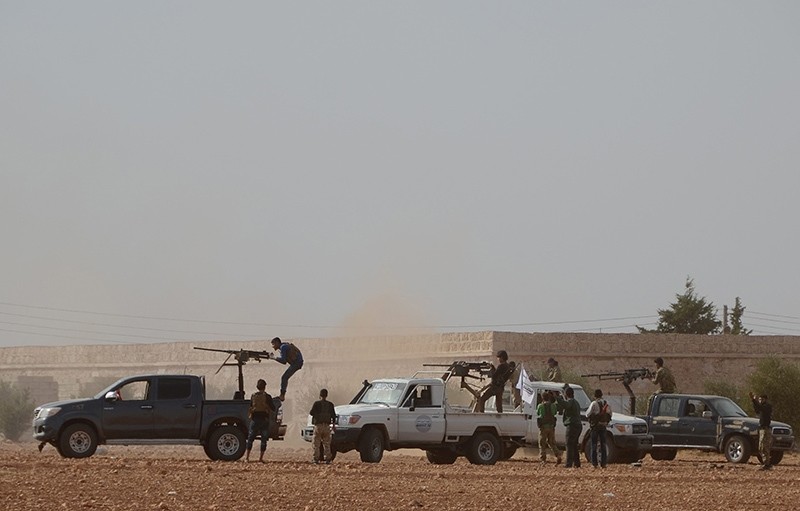 A bomb blast at a Syria-Turkey border crossing near a refugee camp carried out by Daish terrorists killed at least 35 Turkey-backed moderate opposition fighters and wounded dozens more on Thursday, witnesses and a monitoring group reported.

Deputy Prime Minister Numan Kurtulmuş condemned the attack, saying that those who carried it out have committed a crime against humanity.

The Britain-based Syrian Observatory for Human Rights said the blast in Atmeh on Thursday morning was either caused by a suicide bomber or a remotely detonated bomb and that there are rebels among the casualties. The Observatory said that 29 were killed in the attack, adding that many others were also wounded.

Another group, the Local Coordination Committees, said the blast was caused by a bag filled with explosives that went off on the Syrian side of a border crossing. Neither group had any further details about the blast.

The Daish terrorist group, which has been fighting the rebels and their Turkish allies, said a "soldier of the caliphate" detonated a car bomb as the rebel fighters were crossing into Syria, US-based monitor SITE Intelligence Group reported.

The statement said several commanders of the Ahrar al-Sham rebel group were among the dead.

Turkey's official Anatolia news agency said the deadly blast took place during a "change of guard" among Syrian rebels in the area.

Most of the opposition fighters were from a group called Failaq al-Sham, witnesses said. Turkey is backing the fighters in an offensive against Daish terrorists further to the northeast, along a separate stretch of border.

The opposition uses the Atmeh crossing to move between Idlib province, through Turkey, to areas of Aleppo province along the border where the fight against Daish is taking place, the Observatory said.

Opposition fighters have been targeted at the crossing before. Daish claimed responsibility for a mid-August suicide attack there that killed at least 32.

The fighters killed on Thursday were among those participating in Turkey's Operation Euphrates Shield in neighboring Aleppo province.

Ankara began the unprecedented cross-border operation on August 24, saying it was targeting both Daish and YPG terrorist groups

The operation has so far captured the Daesh stronghold of Jarablus and is pushing towards the towns of Dabiq and Al-Bab.

Dabiq holds symbolic importance for Daish because of a prophecy that states it will be the site of an end-of-times battle between Christian forces and Muslims.