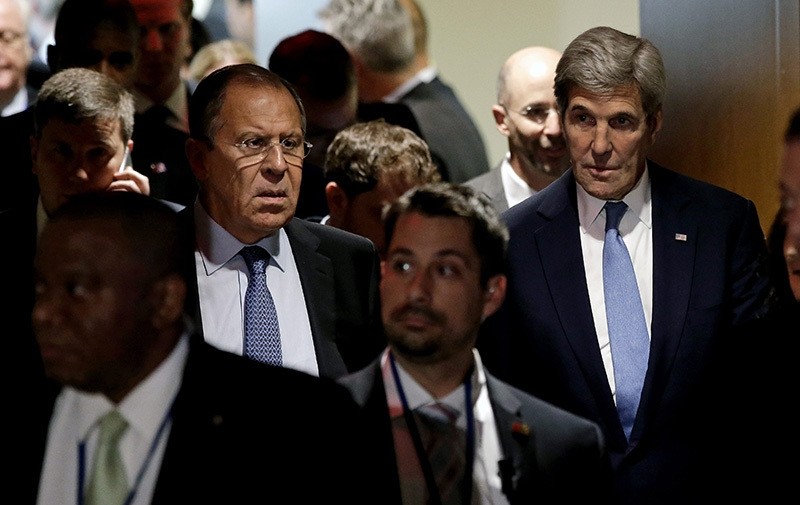 Russia, Saudi Arabia, Turkey and the U.S. will hold a quadrilateral summit on Syria in the Swiss town of Lausanne on Saturday, Oct. 15, Russian Foreign Minister Sergei Lavrov announced on Wednesday.

Speaking in an interview with CNN's Christiane Amanpour on Wednesday, Russian Foreign Minister Sergei Lavrov said that Russia wants countries with influence in the Syrian conflict to initiate a new round of negotiations for a cease-fire.

Foreign ministers from Qatar and Iran will also take part in the talks.

"We would like to have a meeting in this narrow format, to have a businesslike discussion, not another General Assembly-like debate," he was quoted as saying.

Lavrov and U.S. Secretary of State John Kerry agreed to hold talks aimed at "creating the conditions for the resolution of the Syrian crisis" in Lausanne on Saturday, alongside top diplomats from "key countries in the region," Russia's foreign ministry said in a statement.

A U.S. State Department source confirmed the meeting to AFP: "Can confirm Lausanne. Lausanne will be a meeting with key regional participants as well as Russia."

On Sunday, Kerry will likely meet up with his European counterparts from Britain, France and Germany in London.

The United Nations said Syria envoy Staffan de Mistura had been invited to take part in the talks but it was unclear if he would attend.

Lavrov also said that he hoped the discussions in Switzerland could help "launch a serious dialogue" based on the now-defunct U.S.-Russian pact.

Meanwhile, Presidential spokesperson İbrahim Kalın said yesterday that Foreign Minister Çavuşoğlu will attend the meeting and express Turkey's intention and efforts for establishing peace and a cease-fire in Aleppo.

"The fight against Daish, ending of clashes, continuation of negotiations, and delivering the humanitarian aid to Aleppo are our priorities in Syria," Kalın said and added that the regime's attitude towards the peace talks will be an important determinant factor.

The meeting comes as tensions between Moscow and the West have spiked over the conflict after peace efforts unraveled and Russia unleashed an intense bombing campaign to back up a regime assault on the war-ravaged city of Aleppo.

The U.S. pulled the plug on talks with Russia aimed at reviving a flagging cease-fire on Oct. 3, sending ties with Russia spiraling to a new low.

Syria has been plunged into some of the worst violence of its five-year war after the collapse of a hard-won truce brokered by Washington and Moscow.

The ensuing surge in fighting saw government forces declare a large-scale offensive, backed by Russian and Syrian air power, to capture the opposition-held half of battered Aleppo.

Since the army announced its assault on the city on Sept. 22, Russian and government bombardment on the eastern districts has killed more than 370 people, including 68 children, according to an Observatory toll.

Several major international efforts have failed to secure a political solution to the war, which has killed more than 300,000 people.

The two world powers had worked closely in recent months and reached a deal in mid-September that was billed as the "best chance" to end Syria's bloodshed.

That agreement envisioned a halt to hostilities, increased humanitarian aid to hundreds of thousands of besieged civilians across Syria, and unprecedented coordination between Moscow and Washington against terror groups.

But the truce fell apart after a week, and peace efforts have since struggled to get off the ground.

A French-drafted resolution was shot down by Russia in a stormy U.N. session last weekend.

Russian President Vladimir Putin hit out at Paris for the vetoed proposal, accusing it of deliberately putting forward a motion "fanning hysteria around Russia."

New Zealand on Wednesday presented another draft resolution demanding an end to air strikes on Aleppo.

Syria has been locked in a vicious civil war since early 2011, when the Bashar Assad regime cracked down on pro-democracy protests - which erupted as part of the "Arab Spring" uprisings - with unexpected ferocity.

Since then, more than a quarter of a million people have been killed and more than 10 million displaced across the war-torn country, according to U.N. figures. The Syrian Center for Policy Research, however, a Beirut-based NGO, puts the death toll from the five-year conflict at more than 470,000.

One year ago, the Russian military began extensive air operations in Syria with the stated aim of fighting terrorist groups based in the country and supporting the embattled Assad regime.