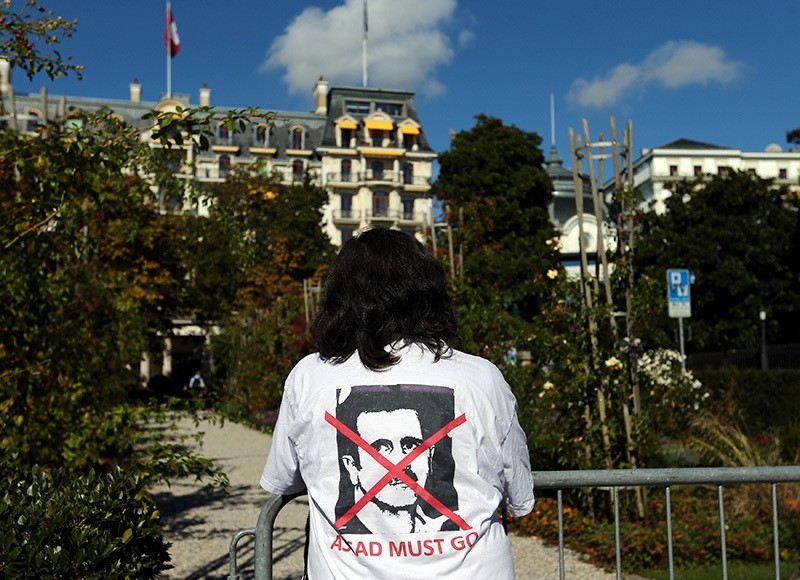 A woman stands outside the Beau-Rivage Palace ahead of Syria talks in Lausanne, Switzerland, October 15, 2016. The T-shirt reads: ,Assad must go,. (Reuters Photo)
by Compiled from Wire Services Oct 15, 2016 12:00 am

The international talks on Syria which would see all the major parties back at the negotiating table began in the Swiss town of Lausanne on Saturday.

The meeting is another attempt to try to find a diplomatic solution to the Syria conflict, which has lasted over five years.

Kerry and Lavrov held face-to-face talks Saturday for the first time since Washington halted their bilateral push for peace in Syria. The pair met in a Lausanne hotel shortly before they were to take part in the broader meeting, officials said. Kerry also met one-on-one with Saudi Foreign Minister Adel al-Jubeir.

Since the collapse of a truce last month, Aleppo has been ravaged by a major onslaught by forces loyal to Bashar al-Assad, backed by Russia, which has prompted renewed efforts to secure a pause in the fighting.

Both sides have played down hopes of a breakthrough, with Lavrov telling reporters on Friday he had no "special expectations" of progress, while a senior official in Kerry's entourage said the aim was to explore ideas for ending the fighting.

Iran also voiced skepticism on Saturday, with a foreign affairs ministry spokesman saying: "I don't think we can have a lot of a hope for the outcome of this meeting."

Meanwhile, the planned offensive by the Iraqi army to recapture Mosul from Daish terrorists will also be on the table in Lausanne.

President Recep Tayyip Erdoğan said an offer on Turkish troops taking part in the operation would be presented by Foreign Minister Mevlüt Çavuşoğlu during the talks.

Çavuşoğlu "will present a proposal to coalition forces in Lausanne," Erdogan said in a televised speech.

"We are ready to fight there against Daish and other terror groups," he added.

The Turkish president on Friday warned that Ankara would have to resort to a "plan B" if its proposal to join the Mosul offensive was turned down, without elaborating.

Ankara is worried the offensive could be led by Shiite militia and also include PKK terrorists, prompting worries on ethnic and sectarian conflicts.

Turkey and Iraq are also at loggerheads over the presence of Turkish troops in Bashiqa camp near Mosul.

Although Ankara says they are there to train local fighters planning to take part in the operation with the consent of Iraqi authorities, the Iraqi parliament has labelled them an "occupying force".

"Nobody should talk about our base in Bahsiqa," Erdoğan said on Saturday.

"That base will remain there because Bashiqa is... an insurance against possible terror attacks targeting Turkey."

Talks prompted over escalation in Aleppo

Intense air strikes hit rebel-held districts of east Aleppo again on Saturday, according to the Syrian Observatory for Human Rights, a British-based monitoring group with a network of sources on the ground.

A leading Syrian opposition group slammed the talks, saying they would not stop the killing.

Aleppo has been engulfed by some of the worst violence of the conflict since the collapse of last month's truce deal, which was brokered by Washington and Moscow and which diplomats are now hoping to revive.

"I think we need to see what happens in the room to determine whether this is the beginning of a new process that continues in this format or not," said a senior US official travelling with Kerry, who arrived in Lausanne around 0900 GMT.

Lavrov on Friday insisted that Russia was not planning on presenting new initiatives on ways to resolve the conflict, which has claimed more than 300,000 lives since it erupted in 2011.

Instead he said Moscow would call for "concrete steps" to implement earlier UN resolutions and the now defunct US-Russia ceasefire deal.

Leading charities issued a joint plea "to establish a ceasefire of at least 72 hours in east Aleppo".

"This will allow the sick and wounded to be evacuated, and for food and medical aid to enter the besieged area," said a statement from Save the Children, the International Rescue Committee, the Norwegian Refugee Council and Oxfam International.

Kerry and Lavrov will be joined by UN Syria envoy Staffan de Mistura, as well as top diplomats from Turkey, Saudi Arabia and Qatar -- all nations that back Syrian opposition forces.

Iran, a key Assad supporter, is represented by Foreign Minister Mohammad Javad Zarif, who arrived for the talks Saturday morning. Egypt, Iraq and Jordan will also be part of the meeting, the U.S. official said.

Kerry is then due to head to London, where he is expected to meet Sunday with his counterparts from Britain, France and Germany.

The intensified bombardment has put increasing strain on rescue workers in besieged eastern Aleppo which is home to an estimated 250,000 residents.

More than 370 people, including nearly 70 children, have been killed in regime and Russian bombardment of eastern Aleppo since the assault began on September 22, according to the Observatory.

Dozens of civilians, including children, have also died in rebel bombardment of regime-controlled western districts, the monitor said.

Buoyed by his forces' gains in Aleppo, Assad said he would use a victory there as a "springboard" to capture other opposition strongholds.

"It's going to be the springboard, as a big city, to move to other areas, to liberate other areas from the terrorists," he told Russia's Komsomolskaya Pravda tabloid in remarks published Friday.