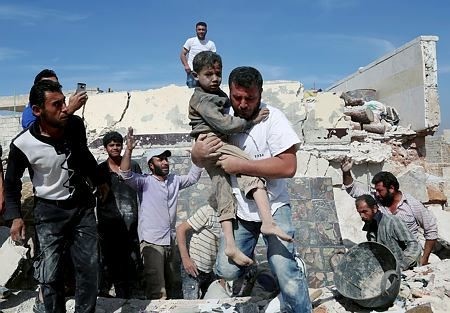 A man carries a Syrian kid after War crafts belonging to the Russian army carried out an airstrilke over opposition controlled residential areas in Aleppo, Syria on October 17, 2016. (AA Photo)
by Compiled from Wire Services Oct 17, 2016 12:00 am

Russian and the Syrian regime armed forces will pause attacks on the Syrian city of Aleppo for eight hours on Thursday so that civilians and the opposition can leave the city, the Russian defence ministry said on Monday.

"On Oct. 20 from 0800 (0500 GMT) until 1600, a humanitarian pause will be implemented in the area of Aleppo. For that period, Russia's air force and Syrian [regime] forces will halt air strikes and firing from other weapons," said Russian defence ministry official Sergei Rudskoy.

"We have taken a decision not to waste time and to introduce 'humanitarian pauses', mainly for the free passage of civilians, evacuation of the sick and wounded and withdrawal of fighters," Rudskoy said at a press briefing.

He said that the initiative comes as Russia, the United Nations and "countries with influence" were continuing to work on a plan for getting extremists from the Fateh al-Sham Front, formerly known as the Al-Nusra Front and Al-Qaeda's affiliate in Syria, to leave Aleppo.

Russia is currently conducting a fierce bombing campaign in support of a regime offensive to capture opposition-held eastern Aleppo, drawing fierce condemnation from the West.

The European Union blasted Russia for causing "untold suffering" and said that air strikes by Moscow and Damascus in Aleppo "may amount to war crimes".

Moscow last Thursday said it was ready to guarantee safe passage for opposition fighters out of eastern Aleppo along a pre-ordained corridor on the Castello Road, the main potential route for humanitarian assistance into the city.