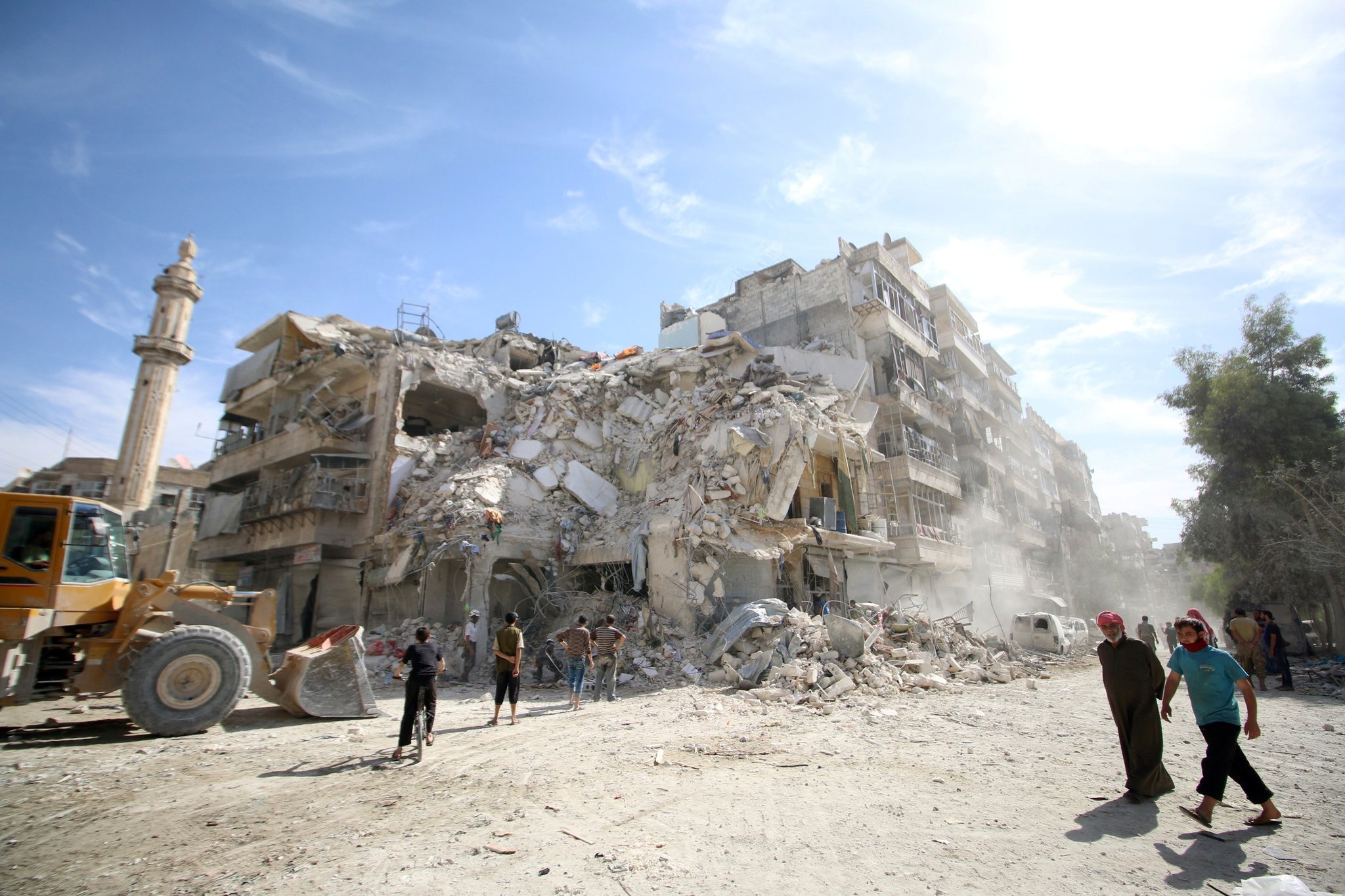 Airstrikes on opposition-held areas in the northern province of Aleppo Monday killed at least 36 people, including children, opposition activists said, as violence in Syria continued while a major operation began against Daesh in neighboring Iraq.

Most of the deaths were in the village of Oweijel just west of the city of Aleppo, where at least 23 people were killed in an airstrike that also wounded dozens, according to the Britain-based Syrian Observatory for Human Rights. Another monitoring group, the Local Coordination Committees, said the air raid was carried out by Russian warplanes and put the death toll at 30.

More than a dozen people were also killed in a besieged eastern opposition-held neighborhood in Aleppo. The eastern parts of the city, Syria's largest, have been subjected in recent weeks to the worst aerial attacks in years. The airstrikes have claimed hundreds of lives, wounded many others and demolished entire buildings. Opposition activists have blamed Russian and Syrian government warplanes for the strikes.

The Observatory said Monday's airstrikes hit in the Marjeh neighborhood. The Aleppo Media Center, an activist collective, said those killed included 11 people with the same family name of Qabs ranging from a month-and-a-half-old baby girl to a 25-year-old man.

Monday's airstrikes coincided with the launch in neighboring Iraq of a major operation by Iraqi and Kurdish forces, backed by the U.S.-led coalition, to retake the city of Mosul from Daesh. There have been concerns the government in Damascus could use the timing of the Mosul offensive to press its onslaught in Aleppo while world attention is diverted to developments in Iraq.

Also Monday, Syrian state media claimed 49 oppostion fighters were killed and wounded in fighting in the neighborhoods of Sheikh Saeed and Shurfa on the southern edges of Aleppo.

In the nearby province of Idlib, a U.S.-led coalition drone struck a car in the provincial capital that carries the same name, killing all inside, according to the Observatory official. It was not immediately clear who was in the vehicle, but such attacks have previously targeted officials with al-Qaida's affiliate in Syria, known as Fatah al-Sham Front.

The Observatory said the attack targeted a faction commander. An official with Fatah al-Sham Front, formerly known as Nusra Front, said all those in the car were "martyred." The man, who spoke on condition of anonymity because he was not authorized to speak to the media, said it was not clear if members of his group were targeted.

The United States and Britain on Sunday acknowledged the Western world's weak support for any military action against Syria's government as they seek ways to pressure Syrian regime leader Bashar Assad and his chief backer, Russia, to halt the deadly Aleppo offensive.

After a meeting of 11 governments opposing Assad's rule, U.S. Secretary of State John Kerry and British Foreign Secretary Boris Johnson each insisted that all options were on the table. But their stark explanations about the danger of resorting to military force appeared to rule out such a move.

The government in Damascus, meanwhile, appears to be trying to improve relations with Egypt, the Arab world's most populous nation, following the first public meeting between Egyptian and Syrian security chiefs.

Maj. Gen. Ali Mamlouk, head of the National Security Bureau and one of Assad's top aides, visited Cairo Sunday at the head of a delegation to coordinate with Egypt in the fight against "terrorism" in the region, Syria's state-run news agency SANA said.

SANA said the Syrians met with top intelligence officials, including deputy chief of Egypt's intelligence agency. It said both sides agreed on "coordinating political standpoints" and strengthening the "cooperation in fighting terrorism." Egypt's pro-government Sada al-Balad and other news websites reported on Sunday that six Syrians arrived on a private jet from Damascus.

Earlier this month, Egypt voted for rival French and Russian draft resolutions on Syria at the U.N. Security Council, arguing that both called for a truce and for aid for besieged Syrians in the rebel-held areas of the northern city of Aleppo.