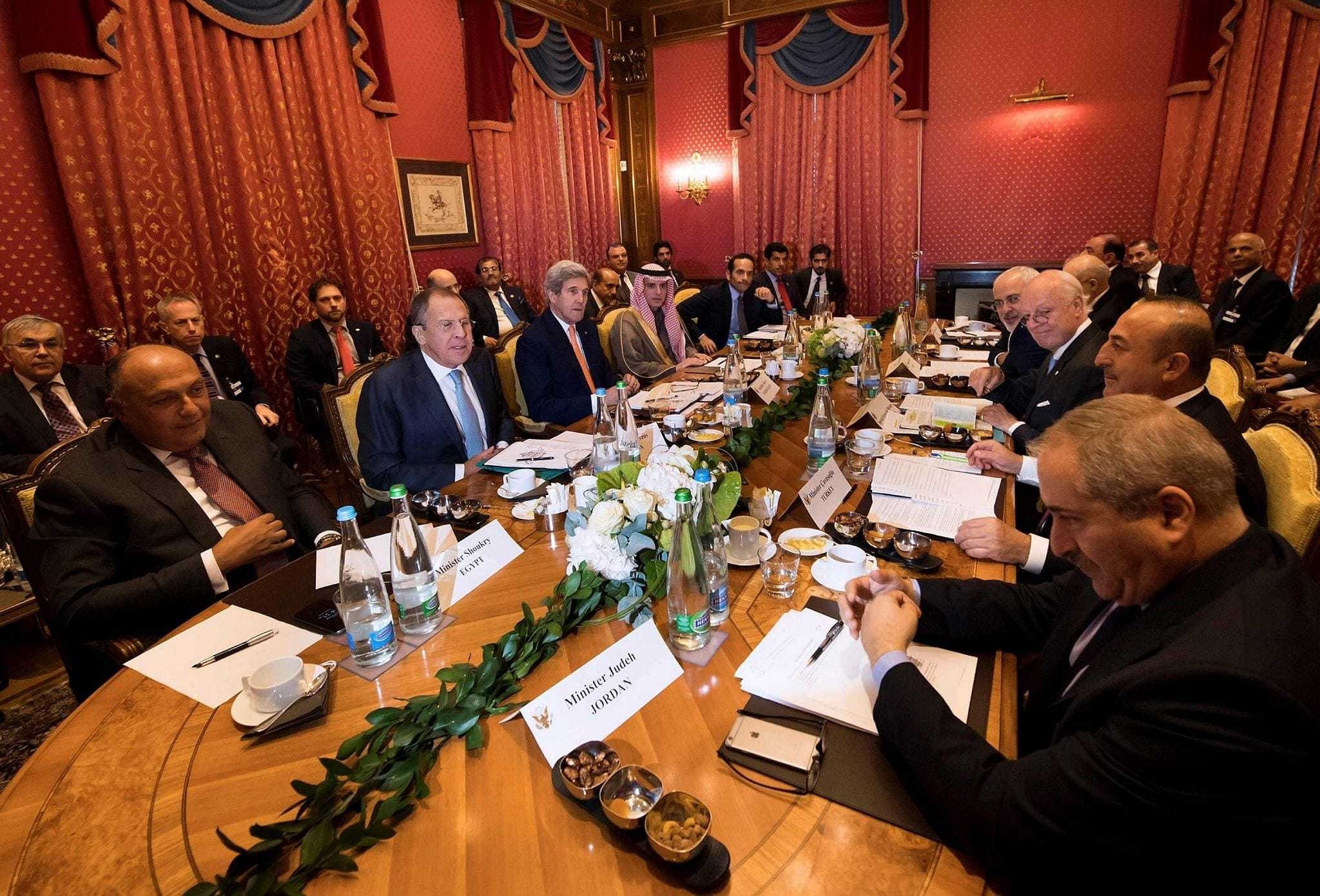 Foreign ministers of world and regional powers speak during a meeting in a fresh push to revive a cease-fire in Syria, in Lausanne, on Oct. 15.
by Compiled from Wire Services Oct 17, 2016 12:00 am

A new round of diplomatic talks has failed once again to end the ongoing violence in Syria's Aleppo, as a nine-nation meeting in the Swiss city of Lausanne proposed new ideas, yet no quick resolution in sight for Syria's agony.

No agreement could be reached between Russia, the U.S. and other key regional ministers in efforts to resolve the Syria conflict during talks in the Swiss city of Lausanne Saturday, Turkish foreign minister, Mevlüt Çavuşoğlu said. Speaking to reporters at the end of talks in Lausanne, Mevlut Cavusoglu said: "People in Syria are stuck in the fighting, there is air bombardment in Aleppo, they suffer from hunger and regime attacks. When there is a meeting like this, everyone has some expectations and these expectations came to nothing. There is no agreement here on implementing any decision." Cavusoglu, however, said there was consensus over certain humanitarian issues. "There is no precise result on any issue but there is consensus on some issues of humanitarian aid and starting peace negotiations," he said.

He noted that all sides discussed the renewal of cessation of hostilities and humanitarian aid delivery in Aleppo. "We made a recommendation to establish an international aid convoy from different countries carrying different flags so there would be no attacks on aid convoys," he said.

U.S. Secretary of State John Kerry convened top diplomats from Russia, Saudi Arabia, Turkey and Iran on Saturday for a 4 1/2-hour meeting in Switzerland. The talks came amid heightened urgency about the city of Aleppo, the latest flashpoint in a war that has killed up to a half-million people, sparked a refugee crisis and offered a territorial base to the Daish.

The Lausanne talks came after last month's U.S.-Russian bid to end the war collapsed in days as the Bashar al-Assad forces backed by Russian airpower launched an offensive on opposition-held parts of Aleppo. Before the talks, Kerry and Lavrov held a face-to-face meeting for the first time after the U.S. suspended its bilateral talks with Russia on Syria. Ministers put a brave face on the Lausanne meeting, which Kerry said was "exactly what we wanted" — a statement that testified mostly to low expectations. The main result was pledges to resume contact on Monday.

On Saturday, Syrian and Russian airstrikes hit several opposition-held Aleppo neighborhoods amid clashes on the front lines in Syria's largest city and onetime commercial center, according to the Britain-based Syrian Observatory for Human Rights and the Aleppo Media Center, an activist collective. Also, opposition fighters launched an offensive to try to capture Dabiq from Daish, which confers special status to the northern Syrian town in its ideology and propaganda.

After high-level talks with Russia, US State Secretary flied to London to brief Washington's European allies after "brainstorming" talks in Lausanne with the main players in Syria's bloody five-year-old conflict.
RELATED TOPICS