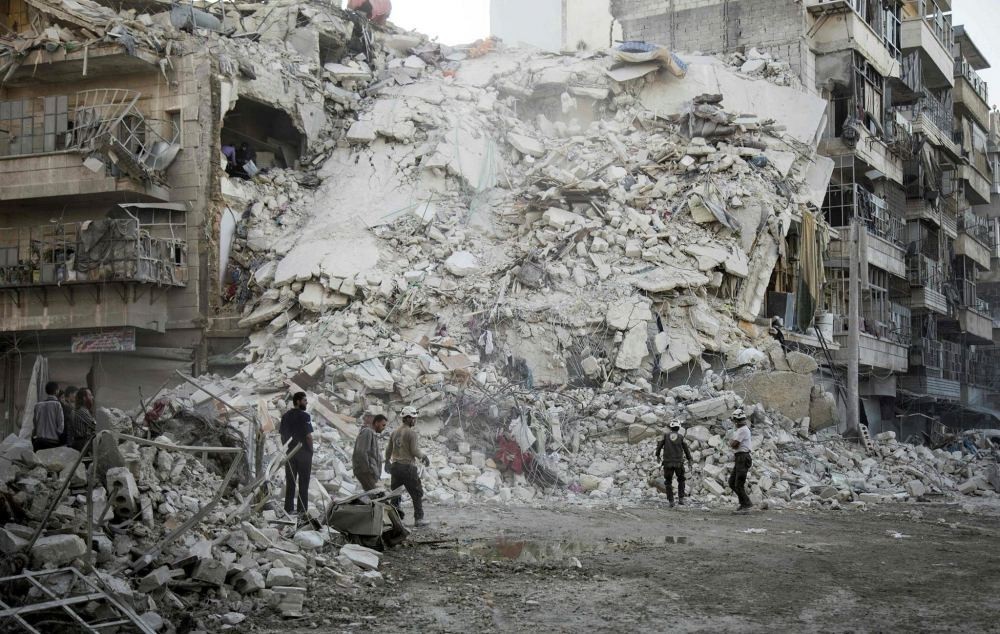 Members of the Syrian Civil Defense, known as the White Helmets, search for victims amid the rubble of a destroyed building following reported air strikes in the opposition-held Qatarji neighborhood of the northern city of Aleppo, on Oct. 17.
by Compiled from Wire Services Oct 18, 2016 12:00 am

As the world diverts its attention to the Mosul offensive, Assad's forces continued their onslaught in opposition-held areas in Aleppo killing 14 members of one family in a day amid faltering diplomatic efforts by the EU, West

Airstrikes on an opposition-held neighborhood in the divided Syrian city of Aleppo on Monday killed at least 14 people, including five children, opposition activists said. The eastern parts of Aleppo, which remain in opposition hands, have been subjected in recent weeks to the worst aerial attacks in years. The airstrikes have claimed hundreds of lives, wounded many others and demolished entire buildings. Opposition activists have blamed Russia-backed Bashar al-Assad's' warplanes for the strikes.

The Britain-based Syrian Observatory for Human Rights said Monday's airstrikes hit in the Marjeh neighborhood. The Aleppo Media Center, an activist collective, said those killed included 11 people with the same family name of Qabs whose ages range between a month-and-a-half-old baby girl and a 25-year-old man.

There have been concerns that the government in Assad forces could use the timing of the Mosul offensive to press its onslaught in Aleppo while world attention is diverted to the events next door. The northern province of Aleppo has been the center of violence in Syria over the past week since a cease-fire brokered by the U.S. and Russia collapsed in late September, with hundreds of people killed in opposition-held areas by intensive airstrikes.

Britain and France sought to persuade the European Union on Monday to condemn Russia's devastating air campaign in Syria and pave the way for imposing more sanctions on Assad regime.

"The pressure [on Russia] must be strong," France's Foreign Minister Jean-Marc Ayrault said. "The more the European Union shows unity and determination, the more we can move forward in what is a moral obligation: to stop the massacre of the population of Aleppo," he told reporters.

But the bloc is split over strategy towards Russia, its biggest energy supplier, with divisions about how harsh any criticism of Moscow should be and whether there was ground for also putting Russians under sanctions. Britain and France want to put another 20 Syrians under travel bans and asset freezes, suspecting them of directing attacks on civilians in Aleppo, in addition to the EU's existing sanctions list and its oil and arms embargo. Paris and London have also raised the prospect of sanctions on 12 Russians involved in the Syrian conflict, adding them to the EU's list of some 200 people that also includes three Iranians, diplomats told Reuters. British Foreign Secretary Boris Johnson, who held talks with U.S. Secretary of State John Kerry on Sunday in London, said Russia's Aleppo bombing "shames humanity."

The government of German Chancellor Angela Merkel is open to ramping up sanctions against Russia over its military involvement in the conflict in Syria, her spokesman said. The German government supports the fact that "all options are being considered, including sanctions against those who are carrying out or enabling these acts," Steffen Seibert said in Berlin.
RELATED TOPICS