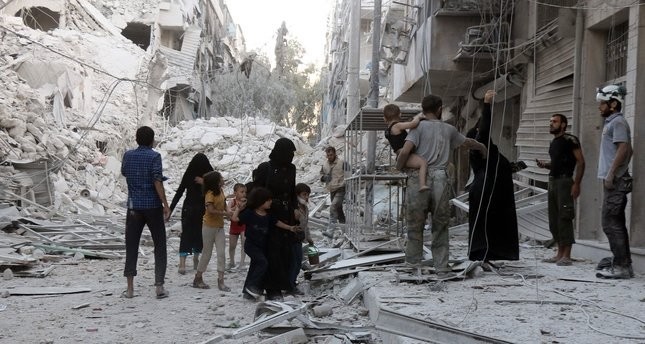 |AFP Photo
by Anadolu Agency Oct 19, 2016 12:00 am
Syrian opposition forces have not withdrawn from eastern parts of Aleppo despite claims by the Assad regime that they were vacating the city, according to opposition leaders.

"Rumors that the city is being abandoned have no basis in fact," an Aleppo-based spokesman for Ahrar al-Sham -- one of Syria's most prominent opposition groups -- told Anadolu Agency.

"This is mere propaganda aimed at undermining the morale of the people here," he said. "We have no plans to leave Aleppo."

Ahmet Genjo, a commander of the opposition Nour al-Din al-Zenki movement, likewise asserted that his group would not leave the city.

On Tuesday, Russian Defense Minister Sergey Shoigu said Russian and Syrian warplanes had ceased striking Aleppo for the last two days in the run-up to an eight-hour "humanitarian pause" slated for Thursday.

Following claims by the regime that armed opposition groups -- along with civilians -- had taken advantage of the lull to vacate the city, opposition spokesmen who spoke to Anadolu Agency denied the claims.

Local residents, too, say they have no intention of leaving.

City resident Rami Abu Said told Anadolu Agency that, despite the on-again, off-again bombardments by Russian and regime warplanes, he had no plans to leave.

Marwan Abu Salih, another Aleppo resident, declared: "This is our country; it's an honor to die in one's homeland."

Abu Majed, a local ambulance driver, for his part, said Aleppo had recently witnessed some of the most intense bombardments within the last four years.

"All types of weapons were used; we're just trying to carry out our mission to save people," he said.

A cease-fire brokered last month ended after Russian and Syrian warplanes carried out airstrikes in Aleppo that the West said targeted civilians.

The cease-fire was the latest attempt to end a five-year civil war that has left hundreds of thousands dead.