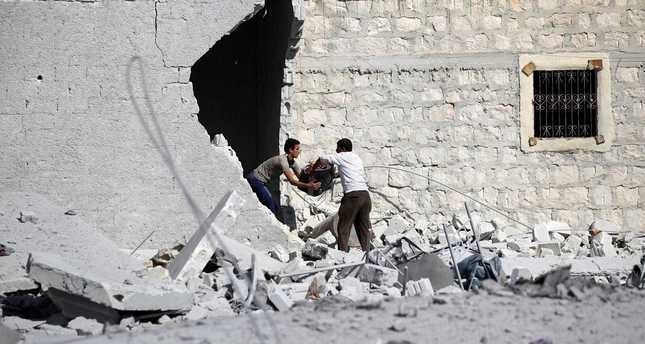 Men carry their belongings from their damaged homes near Guzhe village, northern Aleppo countryside, Syria Oct. 17.
by Compiled from Wire Services Oct 20, 2016 12:00 am

Amid skepticism over truce prospects, a humanitarian pause in airstrikes over east Aleppo has held since Tuesday after days of heavy bombing that killed at least 457 civilians

Russia and Bashar al-Assad forces on Wednesday suspended airstrikes on opposition-held areas in the divided city of Aleppo for the second successive day, ahead of a humanitarian pause announced by Moscow for later this week.

"It is quiet so far. There are no air raids, but shelling by regime forces," Ibrahim al-Hajj, a volunteer with the rescue team White Helmets, told DPA news agency from opposition-held eastern Aleppo.

The Syrian Observatory for Human Rights, a monitoring group, confirmed that there have been no airstrikes on opposition-controlled areas in Aleppo since Tuesday.

Russian Defense Minister Sergey Shoigu said on Tuesday that the cessation of airstrikes on Aleppo was necessary to allow his country to carry out an eight-hour "humanitarian pause," planned for Thursday, and clear the way for evacuating civilians from opposition districts through special corridors. Opposition fighters inside eastern Aleppo have vowed not to leave the area.

Russian Deputy Foreign Minister Sergei Ryabkov said on Wednesday that Russia ruled out extending a pause in bombing of Syria's Aleppo unilaterally, Russia's Interfax news agency quoted him as saying. Ryabkov also said Moscow did not yet see any point in a meeting between Russian Foreign Minister Sergei Lavrov and U.S. Secretary of State John Kerry on Syria.

The UN on Wednesday dashed hopes that a prospective ceasefire in east Aleppo could provide humanitarian relief for besieged civilians, saying all sides needed to back an extended truce before aid convoys could roll.

A plan to pause fighting for eight hours in rebel-held east Aleppo from 0500 GMT on Thursday has been announced by Russia with no word from the Assad forces that it intends to honor the deal.

"Before we can do something really meaningful... we need assurances from all parties," said Jens Laerke, spokesman for the United Nations humanitarian agency (OCHA) in Geneva. "We need a minimum of 48 hours", he added, stressing that Russia's time-limited deal would not be sufficient for UN teams to mobilize.

Aside from getting desperately needed supplies to east Aleppo's estimated 250,000 civilians, the UN also wants to evacuate hundreds of people in urgent need of medical care. UN and Red Cross trucks packed with aid for east Aleppo have been stalled near the Turkish border for weeks, waiting for guarantees that they can safely make deliveries.

Aleppo has been the target of an intense campaign by the forces of Assad forces and Russia since a US-Russian brokered ceasefire in the country fell apart on September 19.

At least 457 civilians have been killed in eastern Aleppo in the regime-Russian offensive in the past month, the observatory reported. Hospitals have repeatedly been hit in airstrikes in recent weeks.

Russia blamed Belgium, which is part of a US-led coalition, of unleashing airstrikes on regime areas in the northern countryside of Aleppo. "If no direct condemnation of strikes by the coalition, by the Belgian Air Force follows, we will have no option left other than regard everything that is happening now as an attempt to preserve bandit groups in Syrian territory," Russian Foreign Ministry spokeswoman Maria Zakharova said, according to Russian ITAR-TASS news agency.
RELATED TOPICS