Syrian city runs out of space for the dead, workers dig 40-meter-wide-grave to make room 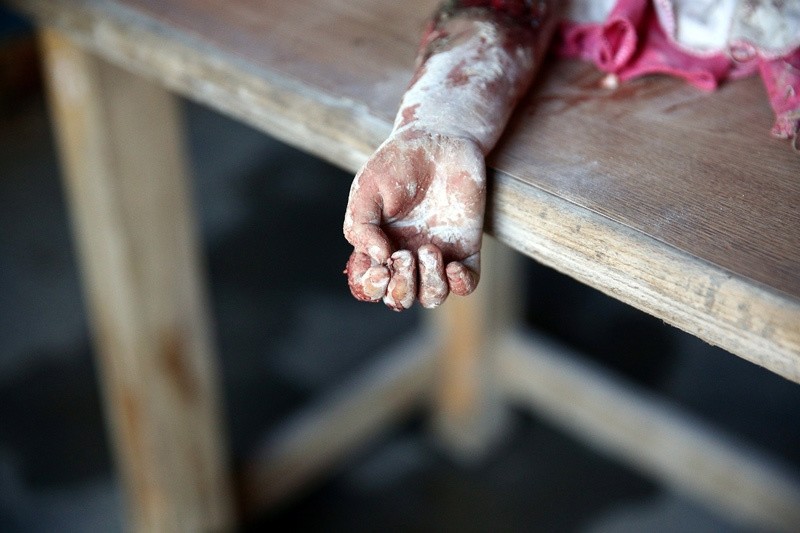 The hand of a dead child is pictured after shelling in the rebel held besieged town of Douma, eastern Ghouta in Damascus, Syria October 20, 2016. (REUTERS Photo)
by Anadolu Agency Oct 23, 2016 12:00 am

Syrians in the opposition-held city of Douma are being forced to bury their dead in multi-layered graveyards as years of conflict make it impossible to plan new cemeteries.

Douma, in southwestern Syria's Rif Dimashq province, has run out of space for single graves. Now the local municipality is burying people in multi-tiered plots.

"We buried our dead outside of the city as the death toll rose. Because the death toll increased more, we began to bury our dead in layered graveyards," Adnan Mudvir, responsible for the city's cemetery, told Anadolu Agency.

Graveyard workers are digging a 40-meter-wide-area for those who lost their lives in bombardments by Russian warplanes and the Syrian regime.

One graveyard worker, Halid Ballah, said they were working on a three-story cemetery. Each layer would accommodate a thousand empty graves.

"We had to build layered graveyards because every day dozens of people were being killed," he told Anadolu Agency.

Since 2011, more than a quarter of a million people have been killed and more than 10 million displaced across the war-torn country, according to UN figures.

Syria has been locked in a vicious civil war since the Bashar al-Assad regime cracked down on pro-democracy protests -- which erupted as part of the "Arab Spring" uprisings -- with unexpected ferocity.