Moscow claims no bombing on Aleppo in past week, Idlib suffers civilian deaths 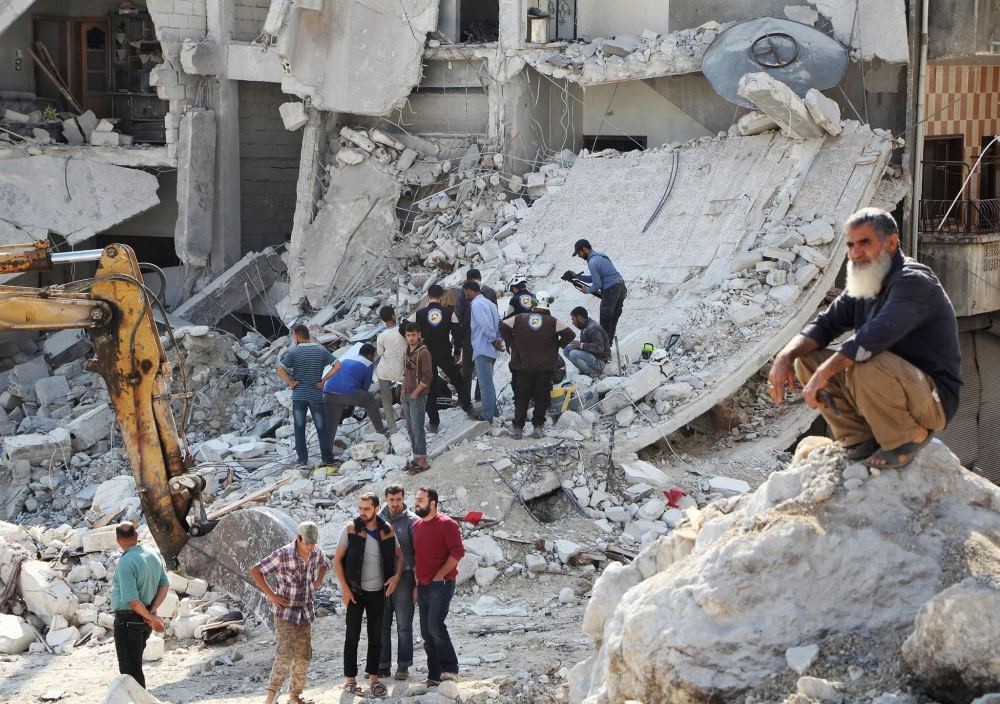 Syrian civil defense volunteers search for victims amid the rubble of destroyed buildings on Oct. 24, following overnight air strikes in the opposition-held town of Kafar Takharim, in the Idlib province of northwest Syria.
by Compiled from Wire Services Oct 26, 2016 12:00 am

Russia denies conducting airstrikes on Aleppo for the last seven days despite reports they resumed over the weekend, while heavy bombardment across Idlib province killed 16 civilians, including three children

Russia said on Tuesday Russian and Syrian military planes had not launched air strikes on Aleppo since Moscow said it was suspending bombing seven days ago, contradicting reports that air strikes in some areas of the city resumed on Saturday.

Defense ministry spokesman Major-General Igor Konashenkov said Russian planes had not even approached, let alone bombed, the devastated city since last Tuesday when Russia suspended air strikes ahead of a pause in hostilities. "Flights over Aleppo by the Russian and [Assad] air forces have been completely halted for the last seven days," said Konashenkov in a statement.

He said six humanitarian corridors in eastern Aleppo, which opened as the 48-hour ceasefire began on Thursday, were still operating. Around 50 women and children had left the city late on Monday escorted by Russian military officers, Konashenkov said.

But the Syrian Observatory for Human Rights said air strikes had resumed since the lull in fighting ended on Saturday, focusing on major frontlines, including in the city's southwest. There had been no civilian deaths from air strikes inside eastern Aleppo, the monitor said. On Tuesday, districts outside the city to the west of Aleppo were hit by air strikes, the Observatory said. Air strikes had continued outside Aleppo during the ceasefire.

East Aleppo came under siege in early July after its main supply route, the Castello Road, fell under Assad forces' control. Internationally brokered attempts to establish ceasefires to allow in United Nations humanitarian aid have failed, although other international and local aid groups have brought in limited supplies. More than 2,000 civilians have been wounded since the Assad forces launched its offensive to drive the rebels out of the eastern districts they have held since 2012. Nearly 500 people have been killed.

The United Nations has abandoned plans to evacuate patients from besieged opposition-held east Aleppo which it had hoped to accomplish during a three day lull in fighting last week, blaming all parties to the conflict for obstructing efforts. The U.N. has been unable to access east Aleppo since July, when the Bashar al-Assad forces put the eastern part of the city under siege.
RELATED TOPICS