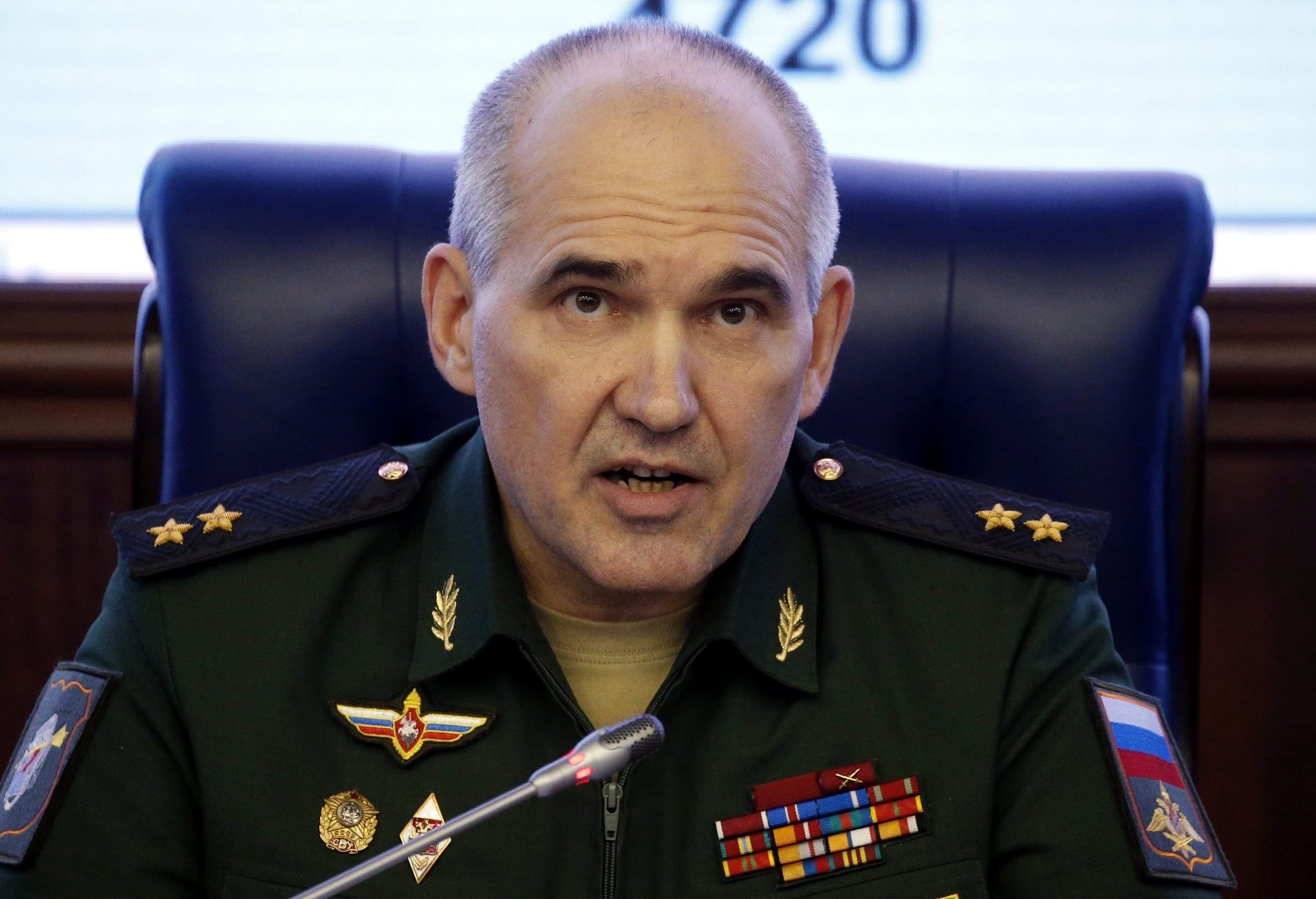 Chief of the Main Operational Directorate of the General Staff of the Russian Armed Forces, Lieut. Gen. Sergei Rudskoy talks to the media during a briefing on the fight against terrorism in Syria. (EPA Photo)
by reuters Nov 01, 2016 12:00 am

Russian Defence Minister Sergei Shoigu said on Tuesday a Western failure to rein in violent militants in Syria had indefinitely delayed the resumption of peace talks.

Shoigu said that rebels backed by Western governments had been attacking civilians in the Syrian city of Aleppo, despite a pause in Russian and Syrian air attacks.

"As a result, the prospects for the start of a negotiation process and the return to peaceful life in Syria are postponed for an indefinite period," Shoigu said.

Separately, a Kremlin spokesman said that a temporary pause in Russian and Syrian government air strikes on Aleppo was in force for now, but could not be extended if the opposition in the city did not halt their attacks.

Insurgents launched an offensive last week against government-held western Aleppo, more than a month into an operation by the army to retake the city's opposition-held eastern districts, which it had already put under siege.

The United Nations said on Tuesday that all sides fighting over Aleppo may be committing war crimes through indiscriminate attacks in civilian areas.

Russia backs Syrian regime's Bashar Assad in Syria's civil war, and its military operation in Syria, now in its second year, has shored up Assad's position. That has put Moscow on a collision course with Washington and its allies who want Assad removed from office.

Since Oct. 18, Russia and its Syrian allies say they have halted air attacks in Aleppo. Western governments had alleged that the strikes had been killing civilians in large numbers, an allegation Moscow denied.

But the pause in the air attacks on Aleppo is fragile: Russian President Vladimir Putin said last month its continuation depended on the behaviour of moderate opposition groups in Aleppo and their Western backers.

Shoigu, who was addressing a meeting of Russian military officials, railed against the opposition and their backers, saying they had squandered a chance for peace talks.

"It is time for our Western colleagues to determine who they are fighting against: terrorists or Russia," Shoigu said, in remarks broadcast on Russian television.

"Maybe they have forgotten at whose hands innocent people died in Belgium, in France, in Egypt and elsewhere?"

Listing attacks he said had been carried out by the Western-backed opposition inside Aleppo, he said: "Is this an opposition with which we can achieve agreements?"

"In order to destroy terrorists in Syria it is necessary to act together, and not put a spanner in the works of partners. Because the rebels exploit that in their own interests."

Shoigu said he was also surprised that some European governments had refused to allow Russian navy vessels bound for Syria to dock in their Mediterranean ports to refuel or take on supplies.

But he said those refusals had not affected the naval mission, or interfered with supplies reaching the Russian military operation in Syria.

Speaking to reporters on a conference call, Kremlin spokesman Dmitry Peskov said the "humanitarian pause" in Russian air strikes in Aleppo had allowed civilians to flee, and made it possible for aid to be brought in.

"But all that is impossible if the terrorists continue to fire on neighbourhoods, humanitarian aid routes, launch attacks, and continue to hide behind a (human) shield. That will not permit the continuation of the humanitarian pause," Peskov said.