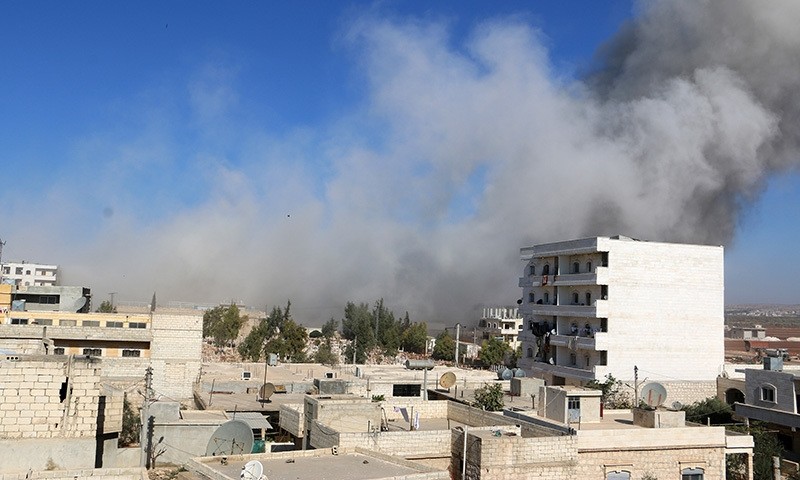 At least seven children and two pregnant women were killed in an air strike on Syria's opposition stronghold province of Idlib on Tuesday, a monitor said.

The strike, which hit the town of Khan Sheikun, in the south of the province, appeared to have been carried out by Assad regime ally Russia, the Syrian Observatory for Human Rights monitor said.

The Britain-based group, which relies on a network of sources inside Syria for its information, says it determines what planes carried out raids according to their type, location, flight patterns and the munitions involved.

In Moscow, the defence ministry denied that Russian aircraft had been in the area on Tuesday, and accused the Observatory of "information provocations".

Russia began its air campaign in support of the regime in September 2015, saying it was targeting "terrorists."

"The strike hit a street where children were playing. Three of the dead children were from one family and were visiting their grandfather," Observatory director Rami Abdel Rahman said.

He said the dead children were four girls and three boys, but did not immediately have their ages.

Also in Idlib Tuesday, 11 civilians including three children were killed in air raids and regime bombardment of a village in the southwest of the province, the Observatory said.

Idlib province is mostly controlled by an alliance known as the Army of Conquest, which groups factions with militants of the Fateh al-Sham Front, formerly Al-Qaeda's Syrian affiliate.

Fateh al-Sham is blacklisted by the United Nations and the United States as a "terrorist organisation" and Russia says its fighters are a legitimate target.

Abdel Rahman also reported the advance, saying it would allow regime forces to protect areas already under their control on the southern outskirts of Aleppo.

Opposition fighters have sought to penetrate regime territory on the southern outskirts of Aleppo to end the regime siege of the opposition-held east of the city.

The Observatory said that regime forces on Tuesday retook Minyan district in the west from the opposition.

Aleppo has been divided between regime control in the west and opposition control in the east since mid-2012, but in recent months regime troops have surrounded the east, laying siege to it.

No aid has reached opposition districts, where more then 250,000 people live, since July, and opposition fighters have tried several times to break through regime lines to relieve the crippling blockade.