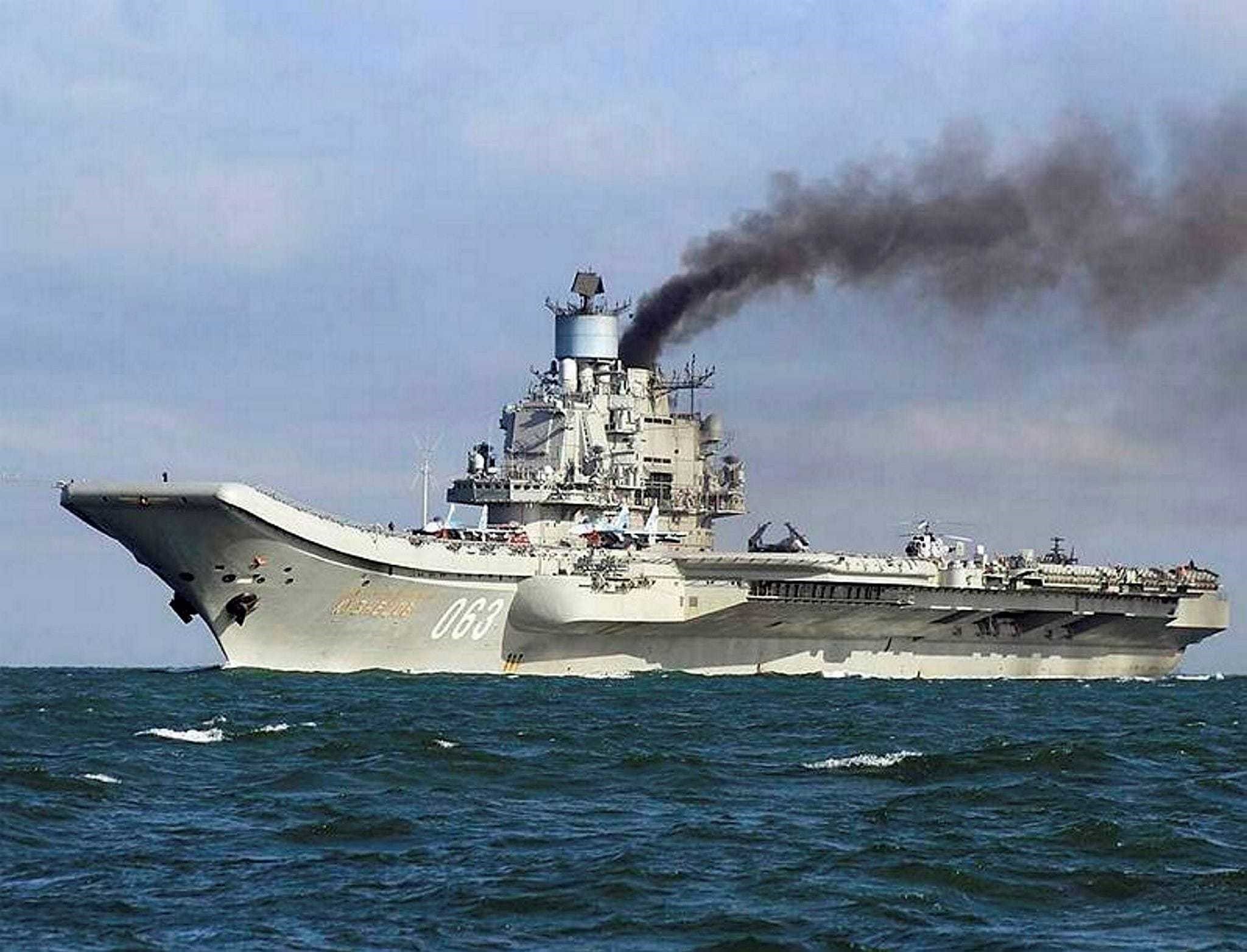 Russian aircraft carrier Admiral Kuznetsov in the English Channel on Oct. 21.
by Compiled from Wire Services Nov 14, 2016 12:00 am

In a move to intensify the assault on Aleppo, the Russian Navy's aircraft carrier group headed by the Admiral Kuznetsov, has anchored off the coast of Syria and begun flight drills over the warn-torn city

A flotilla of Russian warships is now in the eastern Mediterranean off the Syrian coast after being sent to reinforce Russia's military in the area, a Russian naval commander said on state television.

The commander of Russia's flagship Admiral Kuznetsov aircraft carrier, Sergei Artamonov, said via video link that the ships are presently in the "designated zone... in the eastern Mediterranean" and "are now jointly carrying out tasks, maneuvering to the west of the Syrian coast."

The battle group traveled to Syria from the North Sea through the English Channel in the biggest such naval deployment in recent years as part of Russia's military intervention in Syria.

The naval task force has been monitored closely by NATO, whose chief, Jens Stoltenberg, voiced concern that the ships would be used to support the Russian military operation in Syria and "increase human and civilian suffering."

Russia announced late September that it would send aircraft carrier the Admiral Kuznetsov in order to bolster its forces in the eastern Mediterranean off Syria. The vessel reportedly carries MIG-29KR and MIG-29KUBR jets, SU-33 fighters and KA-52K assault helicopters. As well as operating a naval facility in Tartus, Russia runs an air base outside the Syrian coastal city of Latakia, which currently houses warplanes used in its bombing campaign in support of Russia's ally Syrian President Bashar al-Assad. In August, a Russian official said Moscow was planning to expand its presence with a permanent military facility at its Hmeimim air base, which already has an S-400 air defense system, its most modern equipment.

Russia's aircraft brings intensified tension for NATO countries. The Russian aircraft carrier Admiral Kuznetsov and a task group of support vessels have steamed through the North Sea and English Channel in recent days heading to the Mediterranean Sea. Russia withdrew its request to refuel in Spain a fleet of Russian warships, amid pressure from Britain and NATO, who raised concerns that the ships could be used to ramp up air attacks in Syria. Britain piled diplomatic pressure on NATO ally Spain earlier Wednesday, expressing concern that Madrid was considering refueling the warships.

The Russian Defense Ministry said early October that the two ships had left their Black Sea naval base to join Russia's naval force in the Mediterranean. The Buyan-class corvettes are armed with nuclear-capable Kalibr cruise missiles, known by the NATO code name Sizzler, which the Russian military says have a range of at least 1,500 kilometers (932.06 miles). Though variants of the missile are capable of carrying nuclear warheads, the ships are believed to be carrying conventional warheads.

The Russian Defense Ministry stated last Saturday that Russia considers launching new humanitarian pauses in Aleppo as soon as representatives of the U.N. humanitarian mission in Syria officially confirm their preparedness to deliver humanitarian aid to the war-torn Syrian city of Aleppo.

"The main condition for introducing another humanitarian pause in Aleppo should be the readiness of the UN humanitarian mission in Syria to organize delivery of humanitarian aid to eastern districts and evacuate injured and sick people from there," Russian defense ministry's official spokesman Igor Konashenkov said, as reported by Russian news agency TASS.
RELATED TOPICS