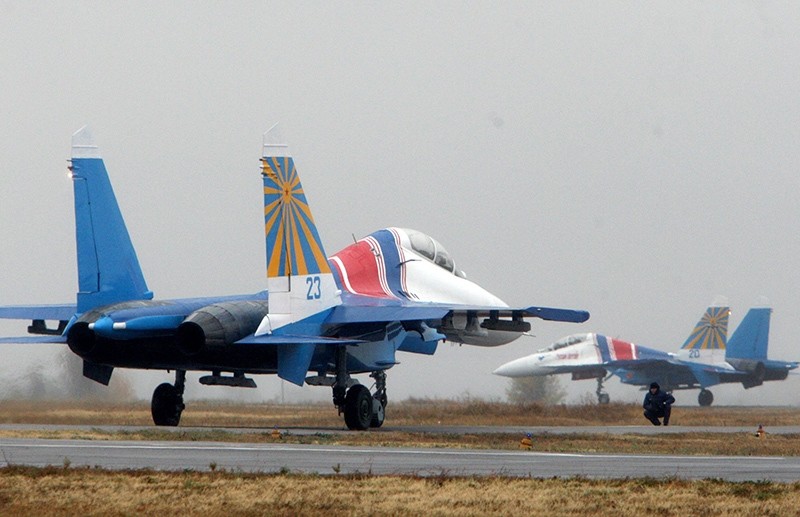 A file picture dated 27 October 2013 shows Mig-29 fighter jets during the Russian Air Force jet show at the air base in Kant (EPA Photo)
by Compiled from Wire Services Nov 15, 2016 12:00 am
Jets from a Russian aircraft carrier have conducted their first Syria strikes, while air strikes hit several districts in opposition-held eastern Aleppo for the first time in weeks on Tuesday as warplanes rumbled overhead, a civil defence official and a resident said.

"Today we began a large operation to inflict massive fire damage on positions of Daesh and al-Nusra in the provinces of Idlib and Homs," Shoigu said in a meeting with Russian President Vladimir Putin, according to comments carried by the Interfax news agency.

Shoigu says a Russian aircraft carrier off Syria's Mediterranean coast, the Admiral Kuznetsov, was involved in the offensive.

The strikes in Aleppo killed at least three people, the Syrian Observatory for Human Rights, a Britain-based war monitor reported.

It added that some of the strikes were carried out by helicopters dropping barrel bombs.

"Our houses are shaking from the pressure. Planes are soaring above us and the bombardment is around us," said Modar Shekho, a resident of eastern Aleppo.

The city has been divided for years between a regime-held western sector and opposition-held eastern districts.

The army and its allies managed to besiege eastern Aleppo this summer and launched a big offensive backed by a heavy bombardment in September, but in recent weeks Moscow has said it was observing a pause in air strikes.

"It's all air strikes and parachute bombs. Today, the bombing is violent... There hasn't been this kind of attack in more than 15 days," said civil defence official Ibrahim Abu al-Laith in Aleppo.
Last Update: Nov 16, 2016 12:27 am
RELATED TOPICS