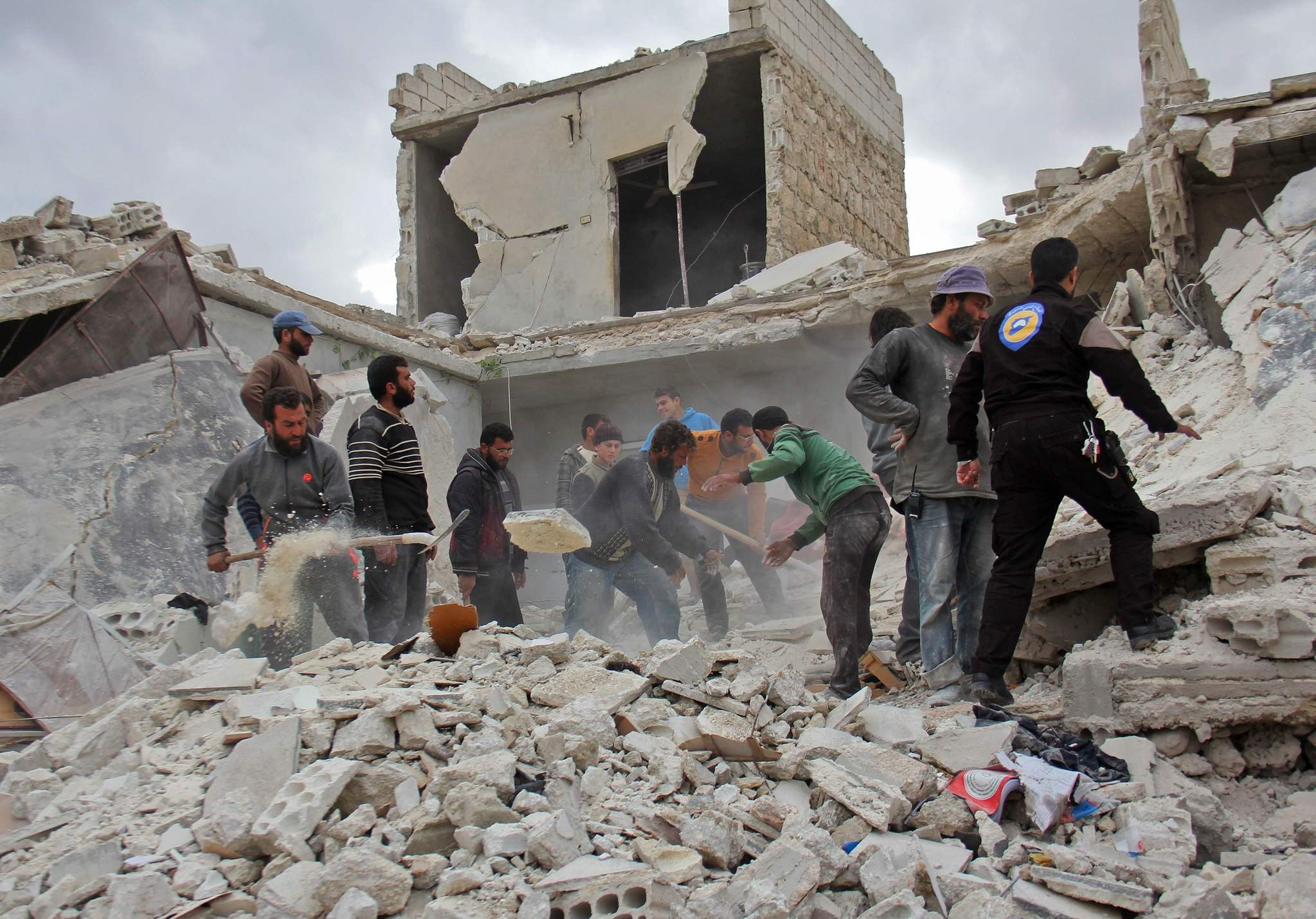 Rescuers and civilians inspect a destroyed building in the Syrian village following air strikes by Syrian and Russian warplanes on November 16, 2016. (AFP Photo)
by Compiled from Wire Services Nov 16, 2016 12:00 am

A children's hospital was hit and 21 people killed in intensified airstrikes Wednesday on the divided Syrian city of Aleppo, according to medical workers and a monitoring group.

The dead included five children and a volunteer medic, the Syrian Observatory for Human Rights said.

Russia - an ally of the Syrian regime - denied it was involved in the Aleppo raids, which resumed on Tuesday after a three-week pause.

Damascus on Tuesday announced that it was launching a major air campaign against "terrorists" in other parts of north-western and central Syria.

Local activists, who say they can tell Russian from Syrian government strikes by the sound, charged that both air forces had hit the opposition enclave of eastern Aleppo, which has been besieged by government forces since July.

Regime and Russian jets carried out about 40 strikes on the al-Shaar and Salaheddine districts, Ibrahim al-Haj of the White Helmets rescue group in eastern Aleppo said.

The bombardment caused a fire in the children's hospital that put it out of service, and also hit a school in the al-Shaar district and the enclave's blood bank, he added.

An ambulance driver was also killed in al-Shaar while he was trying to rescue people injured in the attack, al-Haj added.

The director of the children's hospital made an appeal via a Facebook message.

"A horrible day for the Children's Hospital. Me and my staff and all the patients are sitting in one room in the basement right now, trying to protect our patients. We are trying to leave the basement but we can't because of all the aircraft still in the sky" a man identified as Dr Hatem wrote.

"Pray for us please," he added, saying that hospital had been hit by at least 20 barrel bombs - a crude but devastating weapon usually rolled out of the back of government helicopters.

Russia's Defence Ministry said Wednesday it had not bombed Aleppo in nearly a month. Russia announced the previous day that it had launched a major air campaign targeting extremist groups in the nearby regions of Idlib and Homs.

"I want to emphasize that Russian military planes have not conducted airstrikes on the city of Aleppo" in 29 days, Defence Ministry spokesman Igor Konashenkov said in comments carried by state news agency TASS.

Since Monday, at least five other hospitals were hit by airstrikes, two in the countryside of Aleppo and three in Idlib, said Ayham Al- Zoebi, of the Union of Syrian Medical Relief Organizations (UOSSM) in Germany.

Russia has been conducting a bombing campaign in Syria for more than a year in support of Assad.

Meanwhile, Human Rights Watch said analysis of satellite imagery provided additional verification that damage to a school complex in the village of Haas in Idlib, north-western Syria, on October 26, 2016, was caused by airstrikes carried out by the joint Russian-Syrian military operation.

The Russian Defense Ministry has denied accusations that Russian planes carried out the airstrike, that killed 35 people, among them 22 children.

"The Russian Defense Ministry should stop trying to deny clear evidence of airstrikes on these schools and ensure that Russian and Syrian forces are not attacking schools," Van Esveld said.

The HRW report said that parachute-retarded munitions have been used by the Syrian air force dating back to November 2012 and have also been used during the joint Russian-Syrian military operation that began in September 2015.

"Russia's account in which no bombs fell and no schoolchildren were killed is cynical and yet another reminder of the need for accountability in Syria," it said.

The United Nations and several countries have called for accountability for the attack on the school complex suggesting that it may constitute a war crime.