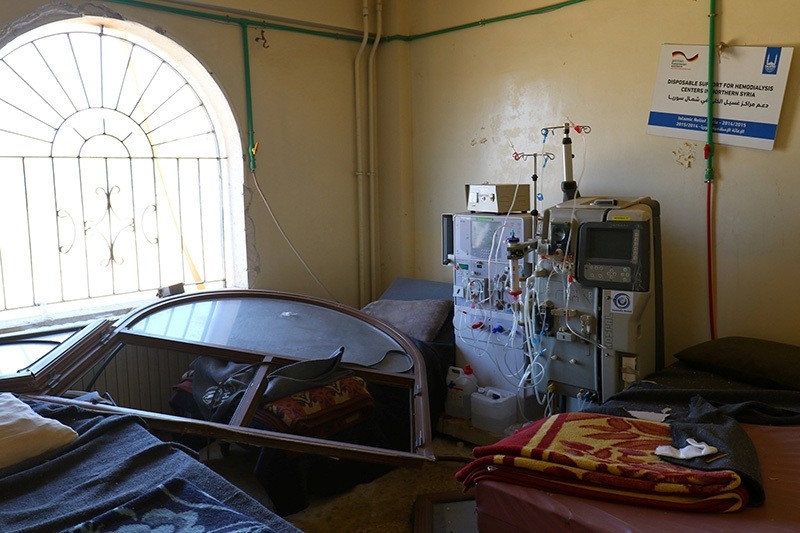 The interior of a damaged hospital is pictured after an airstrike on the rebel-held town of Atareb, in the countryside west of Aleppo, Syria November 15, 2016 (Reuters Photo)
by Compiled from Wire Services Nov 19, 2016 12:00 am

The continued heavy bombardment by Assad forces, all hospitals are now out of service in east Aleppo, the WHO said, revealing the devastating humanitarian situation in the war-ravaged Syrian city

All hospitals in Syria's besieged opposition-held eastern Aleppo are out of service after days of heavy air strikes, its health directorate and the World Health Organization (WHO) said, though a war monitor said some were still functioning.

Intense air strikes have battered the eastern part of the city since Tuesday, when the Bashar al-Assad forces and its allies resumed operations after a pause lasting weeks. They launched ground attacks against opposition positions last Friday.

As Assad forces kept up their campaign against opposition areas in Aleppo, civilians have continued to become targets of the ongoing war in Syria. A barrel bomb killed a family of six in opposition-held eastern Aleppo early on Sunday, a war monitor. The medics said the al-Baytounji family had suffocated to death because the barrel bomb, which fell in the Sakhour district at about midnight, had been laced with chlorine gas. The Syrian Observatory for Human Rights, which monitors the war, could not confirm that chlorine gas was used.

The war monitor, the Britain-based Syrian Observatory for Human Rights, said 48 people, including at least five children, had been killed in eastern Aleppo on Saturday by dozens of air strikes and barrel bombs and dozens of artillery rounds. That brings the number of people killed by the increased bombardment of Aleppo and the surrounding countryside over the past five days to about 180, including 97 in the city's besieged eastern sector, the observatory added.

Warplanes, artillery and helicopters continued bombarding eastern Aleppo on Saturday, hitting many of its densely populated residential districts, the Observatory said. There were intense clashes in the Bustan al-Basha district, it added. "This destruction of infrastructure essential to life leaves the besieged, resolute people, including all children and elderly men and women, without any health facilities offering life-saving treatment ... leaving them to die," said Aleppo's health directorate in a statement sent to Reuters late on Friday by an opposition official.

Assad regime yesterday refused a U.N. proposal to grant the eastern districts of Aleppo autonomy as part of an approach to restore calm to the war-torn city. Foreign Minister Walid al-Moallem said the state's institutions "must be restored" to the city once militants have been expelled from the opposition-controlled eastern districts.

Speaking following a meeting with the U.N.'s Special Envoy Staffan De Mistura, al-Muallem gave no indication Assad would ease its assault on Aleppo's eastern districts in a campaign that, as of Saturday, has left all hospitals serving the enclave out of service.

De Mistura warned in an interview with the U.K. newspaper The Guardian earlier this week that the Syrian regime was chasing a "pyrrhic victory" in Aleppo if Assad does not arrive at a political settlement with the opposition.

Last week's bombing on eastern Aleppo appeared to mark the end of a pause inside the city declared by Russia on Oct. 18. Aleppo is the focal point of the six-year war in Syria. Assad has said he is determined to retake the country's largest city and former commercial capital. Hundreds of people have been killed since Tuesday in one of the heaviest bombardments of the country's civil war, now in its sixth year, as the Assad forces and its allies attempt to quash resistance in Aleppo's opposition-held eastern zone.

In mid-October, Russia said it would halt weeks of deadly airstrikes to allow opposition groups to leave eastern Aleppo. The opposition fighters refused to take up the offer and the United Nations failed to negotiate the delivery of aid into the besieged area. The Assad siege has left an estimated 275,000 people trapped, with no aid allowed in since July, amid a punishing bombing campaign.

Western countries and human rights activists have accused the air forces of Assad and Moscow of repeatedly targeting hospitals, bread lines and other civilian infrastructure in territory controlled by the opposition. As the humanitarian situation worsens in Aleppo, the United Nations stated last week that food rations has run out in east Aleppo, as the quarter of a million people besieged in the Syrian city entered what is expected to be a cruel winter.
Syria has been locked in a vicious civil war since early 2011, when the regime cracked down on pro-democracy protests erupting as part of the "Arab Spring" uprisings with unexpected ferocity. Since then, more than a quarter of a million people have been killed and more than 10 million displaced across the war-torn country, according to U.N. figures.
Last Update: Nov 20, 2016 9:28 pm
RELATED TOPICS