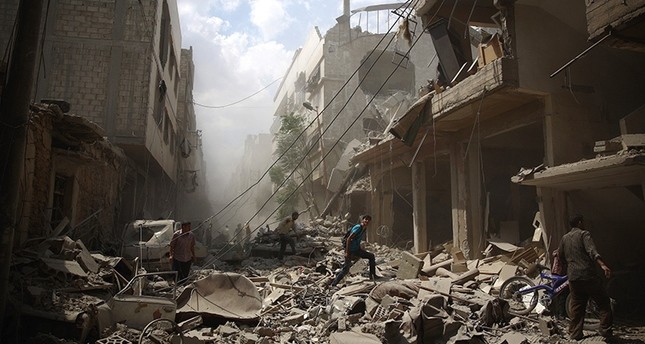 The Assad regime refused the U.N. envoy's latest proposal for a truce in Aleppo on Sunday, calling on insurgents to withdraw and saying it would not grant autonomy to the rebel-held east in exchange for calm.

Foreign Minister Walid al-Moallem said restoring government rule was a matter of "national sovereignty," and that Damascus would not allow the people of eastern Aleppo to be "hostages to 6,000 gunmen."

"We agreed on the need that terrorists should get out of east Aleppo to end the suffering of the civilians in the city," he said.

He spoke after meeting with U.N. envoy Staffan de Mistura, who acknowledged a "major disagreement" with al-Moallem and said a "creative" if interim solution was required to halt the violence.

"We are only proposing that there should not be a radical dramatic change in the administration of Aleppo until there is a political solution," he said.

The envoy warned in a recent interview with the U.K. newspaper The Guardian that the regime was chasing a "pyrrhic victory" in Aleppo if it does not reach a political settlement with the opposition.

He warned the military's approach would drive more moderate rebels into the ranks of the Daesh terrorist group.

At least 172 civilians have been killed since the regime renewed its assault on the besieged enclave six days ago, according to the Britain-based Syrian Observatory for Human Rights.

The U.N. estimates 275,000 people are trapped inside. By Saturday, the regime had damaged or destroyed every hospital in the east, according to the Syrian American Medical Society, which supports hospitals in Syria.

The Assad regime denies striking hospitals, and de Mistura said there was a "difference of opinion" about the attacks. He said he had proposed sending an observer team to inspect all the hospitals in Aleppo, but that the idea was not discussed further.

De Mistura has proposed that the Syrian regime grant eastern Aleppo autonomy in exchange for peace.

Al-Moallem also called on the militants to withdraw, and said he hoped that U.S. President-elect Donald Trump's incoming administration would cut off support for "terrorists" in Syria and "rein in" the states backing them, a reference to Turkey and Saudi Arabia.

Bashar Assad said earlier this week that Trump could prove to be a "natural ally" to Damascus.

U.N. Secretary-General Ban Ki-moon condemned the intense air assault on eastern Aleppo over the last several days as well as the corresponding shelling of western parts of the city, in a statement released by his spokesman Sunday. He called on all the parties to ensure freedom of movement for civilians and allow unhindered access to humanitarian assistance.

Ban reminded "all parties to the conflict that targeting civilians and civilian infrastructure is a war crime," the statement said. He said those responsible for these and other atrocities in Syria "must one day be brought to account."

On Sunday, pro-regime forces advanced into parts of the strategically important Hanano district, according to state media and the Observatory.

"The regime is targeting everything that moves," said Ammar Sakkar, an officer with the Fastaqim rebel faction in the city. He said the regime had captured the Zuhour hill, which overlooks parts of the east.

Rebels outside the city have launched two unsuccessful offensives to break the regime's siege and have shelled the regime-held western districts.

Earlier Sunday, at least eight children were killed when rockets struck a school in regime-held western Aleppo, the Observatory said. Syrian regime media said a teacher was also killed in the attack.

In the opposition-run village of Nusaybeen, outside Damascus, activists said at least one child was killed in a presumed regime airstrike on a primary school.

The Assad regime has stepped up its attacks outside Damascus in the western Ghouta region after forcing rebels in eastern Ghouta to surrender earlier this year. The Observatory says at least 30 civilians have been killed in western Ghouta over the past 4 days.

In Aleppo, an airstrike early Sunday killed a family of six in their home in the Sakhour district in the east, according to the activist-run Thiqa News Agency. Witnesses said they smelled chlorine gas, and rescuers said the family appeared to have suffocated from toxic gas.

The allegations could not be independently verified. A U.N. investigative team has said the regime used chlorine as a chemical weapon on at least two occasions during the conflict which is in its sixth year now.