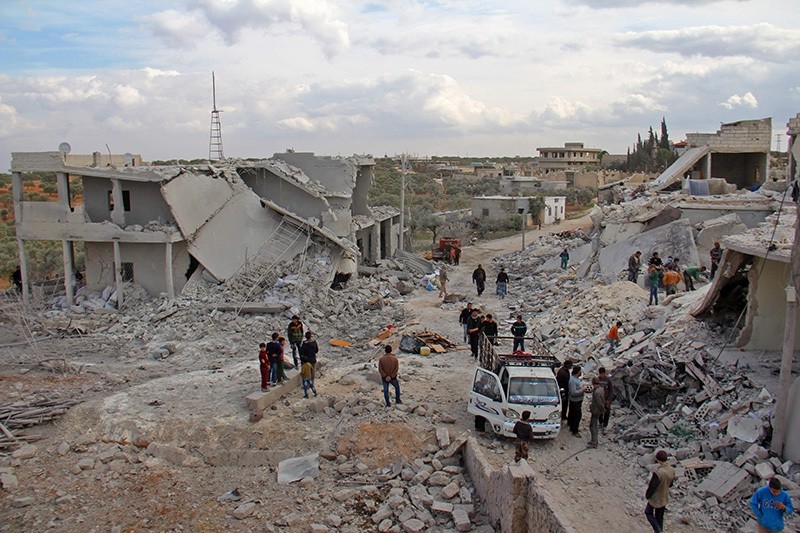 Civilians check destroyed buildings in the Syrian village of Kfar Jales, on the outskirts of Idlib, following air strikes by regime and Russian warplanes on Nov. 16, 2016. (AFP Photo)
by French Press Agency - AFP Nov 23, 2016 12:00 am

Assad regime forces pushed deeper into moderate-held eastern Aleppo on Tuesday, forcing civilians to flee as the regime pressed an assault to recapture the entire city.

The city was once the country's economic powerhouse, but it has been ravaged by the war that has killed 300,000 people since 2011.

Regime forces pounded the area with air strikes and barrel bombs as ground troops advanced in the key eastern district of Masaken Hanano, the Syrian Observatory for Human Rights said.

A week into the latest round of fighting for the city, the regime controls around a third of the district, the Observatory said.

The area has been shelled heavily during the war, and many residents had already fled, but the latest fighting prompted even the last holdouts to leave.

Observatory head Rami Abdel Rahman said that if regime forces manage to take the district they will be able to "cut off the northern parts of moderate-held Aleppo from the rest of the moderate-held districts".

At least 143 civilians, including 19 children, have been killed in the city's east since the latest assault began on November 15, according to the Britain-based monitor.

It added that residents of eastern districts had suffered from "suffocation" after four barrel bomb attacks by regime and that medical officials suspected a chlorine gas attack.

The Organisation for the Prohibition for Chemical Weapons (OPCW) said that the regime's key backer Russia had offered it "samples" relating to a chemical attack in Aleppo.