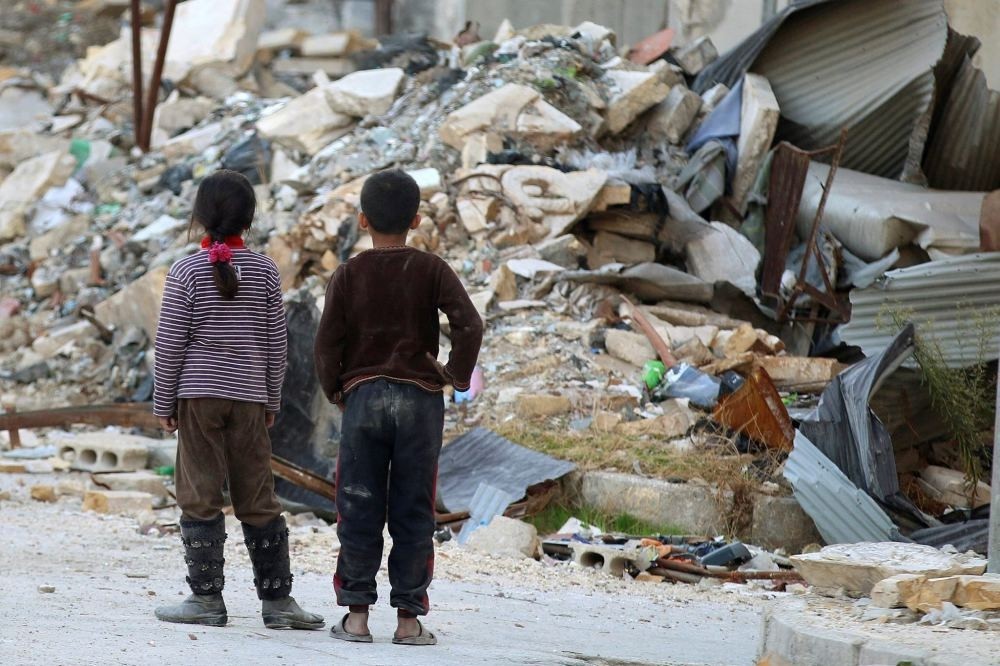 Children inspect the rubble of damaged buildings in an opposition-held besieged area in Aleppo, Syria, Nov. 6.
by Compiled from Wire Services Nov 24, 2016 12:00 am

As the battle for Aleppo leaves more civilians dead with children becoming the most vulnerable victims of the war, Assad's army launched the new volunteer 5th Corps to bolster its forces against the opposition

After a five-year war effort, Bashar Assad's forces allegedly form a new voluntary corps while heating up the battle for Aleppo which leaves children the most vulnerable victims of the ongoing war in Syria. The Syrian Arab Army's High Command announced on Tuesday afternoon the creation of the 5th Corps and called on volunteers to join the Assad forces. Syria's forces are bolstered by Iranian troops, Iran-backed militias, and fighters from Lebanon's Hezbollah group, as well as Russia.

As Iran provides military and political backing to Assad's forces, an Iranian semi-official news agency quoted an official as saying that more than 1,000 fighters sent from Iran have been killed in the Syrian war so far. It quotes Mohammad Ali Shahidi as saying "the number of martyred defenders of shrines ... has passed the number of 1,000."

In August, he was quoted as saying that there have been at least 400 members of Iranian brigades killed in Syria, half of them Afghan. Some Afghan Shiites who live in Iran have been fighting alongside Iranians in Syria. Shahidi runs the Martyr Foundation, which supports families of those killed in conflicts. His remarks were reported by the Tasnim agency on Tuesday.

Egypt's president Abdel-Fattah el-Sissi also expressed support for Assad's military saying that his priority is to "support the national army" of Syria. Egypt's move would likely to irk Saudi Arabia as Cairo and Riyadh are at odds over the war in Syria. Egypt angered its top financial backer last month when it backed Russian and French draft resolutions on Syria at the U.N. Security Council.

The U.N. Special Envoy for Syria, Staffan de Mistura on Tuesday said he was worried that Assad could launch a new offensive to crush eastern Aleppo before U.S. President-elect Donald Trump is inaugurated on Jan. 20. Staffan De Mistura did not explain why he thought Syria might make such a move, but European diplomats have said Assad may feel emboldened by Trump's vow to build closer ties with Russia, and the current U.S. government is unlikely to strike back so close to leaving office. De Mistura was rebuffed in Damascus on Sunday on a truce proposal that would allow the opposition to administer the city's east.

Meanwhile, Assad troops battle their way into opposition-held eastern Aleppo, Save the Children has hit out at the "moral outrage" of the mounting deaths and suffering of children in the battleground Syrian city of Aleppo, in a statement released yesterday. The charity said medics across northwest Syria were looking to fortify hospitals after a wave of attacks in opposition-held east Aleppo left facilities struggling to care for injured children.

Assad forces have been waging a ferocious assault on east Aleppo since Nov. 15, with the Syrian Observatory for Human Rights saying more than 140 civilians have been killed, 19 of them children. The renewed fighting comes amid international concern for the fate of more than 250,000 civilians trapped in besieged rebel-held areas of the northern city.

"It is a moral outrage that the death toll of Aleppo's children continues to grow and seems only set to get worse, whilst so little action is being taken to end the bombing and hold warring parties accountable for these attacks on civilians," said Sonia Khush, Syria director for Save the Children.

Aleppo was once the country's economic powerhouse, but it has been ravaged by the brutal war across Syria that has killed 300,000 people since it began with anti-Assad protests in March 2011.
RELATED TOPICS