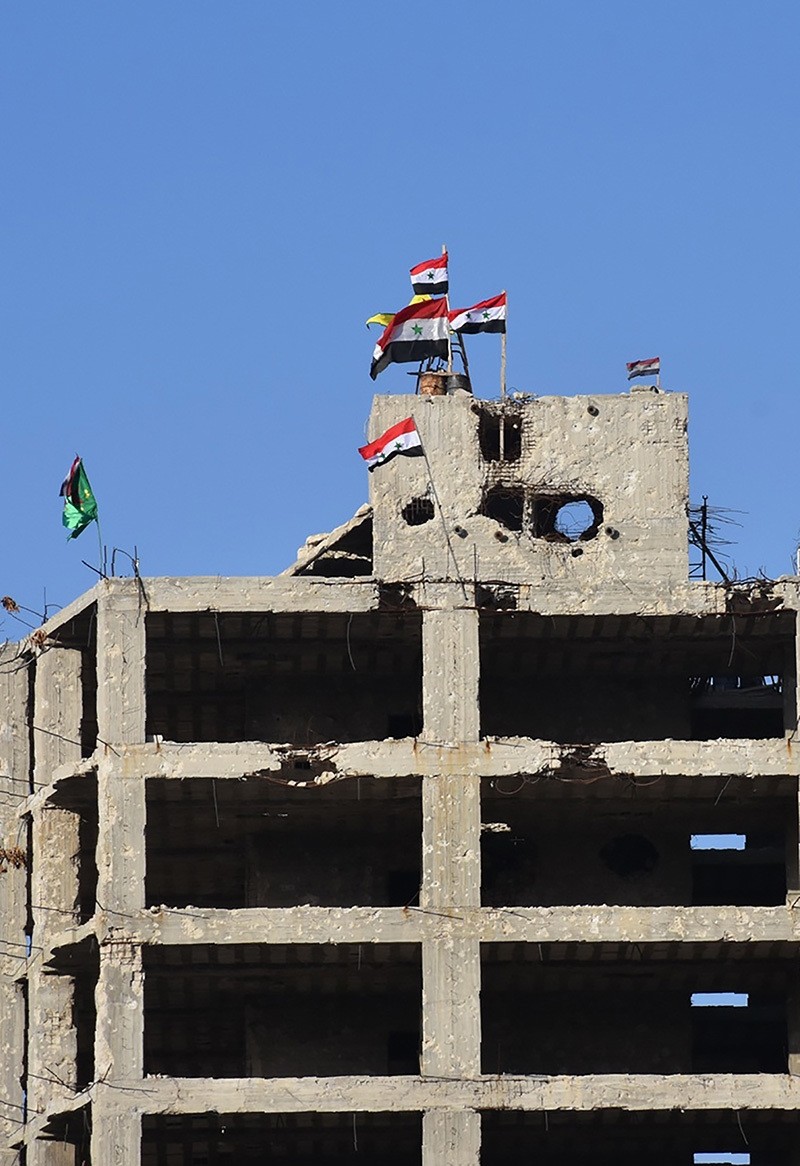 Syrian flags, with YPG flag in the background, flutter on top of a building in Aleppo's Bustan al-Basha neighbourhood on Nov. 28, 2016 during the regime assault to retake the entire northern city from rebel fighters. (AFP Photo)
by Yusuf Selman İnanç
Nov 29, 2016 12:00 am

The Syrian regime has been battering the opposition-held parts of Aleppo with 250,000 civilians now suffering from energy and food shortages while thousands of them have fled the city. The regime claims that it evacuates civilians in the areas abandoned by the opposition, but people are being taken to the northern parts of the city controlled by the PKK's Syrian branch, the Democratic Union Party (PYD). This is how the Assad regime is trying to show that PYD-controlled areas are safe for civilians; indeed, the areas are safe because neither the Russian nor regime jets hit the PYD. A video that went viral on social media recently showed regime soldiers and PYD fighters enter captured neighborhoods together and wave both the PKK and the regime flags.


The regime and the PYD refuse to admit that they are allies, but it is a fact that the two sides have allied several times and avoid confronting each other. The regime has never considered the PYD a threat, for instance, when its militants captured large swathes in Syria's north or Aleppo's northern neighborhoods. It was also reported that the abandoned areas were taken by the PYD. The group is known for its intention to create a Kurdish corridor, linking Kobani to Afrin through Aleppo's north. PYD leader Salih Muslim confirmed this desire in an interview last year. Confirming the alliance between the PYD and the regime, Fabrice Balanche, a researcher for Washington Institute, wrote last year: "Kurdish forces have already helped the Syrian army and Hezbollah on two fronts: Surrounding rebel forces in east Aleppo and rescuing the encircled Shiite towns of Zahra and Nubl."

As a result of endless bombardment, the Assad regime troops and their allies have captured large swathes from the opposition, with Reuters reporting, "Two opposition officials said the insurgents, facing fierce bombardment and ground attacks, had withdrawn from the northern part of eastern Aleppo to a more defensible front line along a big highway after losses that threatened to split their enclave. The Syrian Observatory for Human Rights said the northern portion of eastern Aleppo lost by the rebels amounted to more than a third of the territory they had held, calling it the biggest defeat for the opposition in Aleppo since 2012."

According to Agence France-Presse: "The regime gains have prompted an exodus of thousands of desperate civilians, some fleeing to districts held by the government or Kurdish forces, others heading south into areas still under opposition control. 'The situation is disastrous,' said Ibrahim Abu al-Leith, a spokesman for the White Helmets rescue group in the Ansari neighborhood. 'There is mass displacement and morale is in the gutter,' he said, his voice cracking with emotion. 'People are sleeping in the streets. They don't have anything to eat or drink, but neither do we,' he said."

A 7-year-old girl from Aleppo has been tweeting inside the city. Her mother Fatemah manages her Twitter account. The tweets have attracted huge attention, being re-tweeted thousands of times. As reported by Reuters: "Overnight Sunday to Monday, Fatemah posted a Tweet telling her followers: 'Last message - under heavy bombardments now, can't be alive anymore. When we die, keep talking for 200,000 still inside. BYE.- Fatemah'. Several hours later, a picture of the young girl covered in dust was uploaded with the text: 'Tonight we have no house, it's bombed & I got in rubble. I saw deaths and I almost died. - Bana #Aleppo'. A tweet posted later on Monday read: 'Under heavy bombardments now. In between death and life now, please keep praying for us. #Aleppo'." Her current condition is unknown.

Aleppo is the main battlefield in the country and carries an unprecedented strategic significance. If the Assad regime gains full control of the city, the opposition may lose its links to other opposition-held areas in Idlib and Hama. Moreover, it would mean the Assad forces and the Turkish-backed Free Syrian Army, that operates under the scope of Operation Euphrates Shield, will face each other. However, the Syrian opposition's senior negotiator George Sabra told the BBC, "The fall of opposition-held eastern Aleppo would not mean the end of the fight against Bashar Assad." He did add though, that it would "make any hope of a peace deal more difficult."

In March 2011, Syrians were emboldened enough to raise their voice against Assad's dictatorship. However, the regime's response was not as peaceful as protesters expected and the country was subsequently dragged into a deadly civil war after opposition groups took up arms against the government. The Syrian civil war has now entered its fifth year and has caused the deaths of more than 400,000 people with at least 100,000 still missing. The war has also left nearly 10 million people displaced. The vast majority of Syrian refugees have fled to Lebanon, Jordan, Iraq and Turkey.