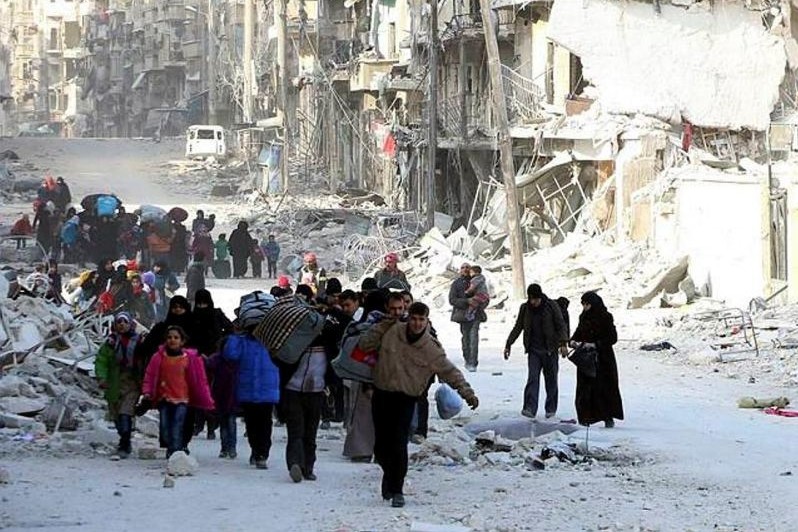 Displaced Syrian families leave the neighborhoods where the fighting occurs in eastern Aleppo, Syria, Nov. 29.
by Compiled from Wire Services Dec 02, 2016 12:00 am

Opposition groups in eastern Aleppo have agreed to form a new military alliance to better organize the defense of parts of the city they control from a ferocious assault by Bashar Assad's forces and its allies, officials in two of the opposition groups said Thursday.

The Assad regime assault backed by allied militia has driven the opposition from more than a third of the territory they held in eastern Aleppo, threatening to crush the rebellion in its most important urban stronghold. The rivalry among opposition groups has been seen as one of their major flaws throughout the war.

The two officials, speaking from Turkey, said the new alliance would be called the "Aleppo Army" and led by the commander of the Jabha Shamiya opposition faction, one of the major groups fighting in northern Syria under the Free Syrian Army (FSA) banner.

An official with a second opposition group confirmed that the Jabha Shamiya's Abu Abdelrahman Nour had been selected as the leader. In an interview with Reuters last week, Nour urged greater support from foreign states that back the opposition. A Jabha Shamiya official told Reuters the new alliance would help centralize decision-making.

The Jabha Shamiya group, known in English as the Levant Front, has received support from Turkey and other states aiming to remove President Bashar Assad from power.

In eastern Aleppo, the humanitarian situation has severely deteriorated as the Syrian regime's advance into opposition-held east Aleppo has deprived families of anywhere to hide and left shredded bodies of men, women and children strewn in the streets. Previously, civilians in the eastern sector of the city could try to take shelter from airstrikes inside buildings, but now sudden artillery fire can pound the streets without warning, mowing down all those in its path. "It's really raining shells," said the AFP correspondent in the battered city.

On Wednesday, the correspondent witnessed a shell crashing onto a main road, ripping off a little girl's hand and piercing her head with shrapnel. With east Aleppo's ambulances either destroyed or lacking fuel, no rescue services were available. Two young men on a moped tried to whisk 10-year-old Mona away to safety, but her family later told AFP that she died of her serious injuries.

Two weeks into the all-out assault and after a months-long siege, pro-Assad forces have seized control of around 40 percent of what had been opposition-controlled east Aleppo since 2014.

After wave after wave of airstrikes, the Syrian regime is pounding rebel areas with intensive bombardment. The crude barrel bombs dropped by helicopters at least gave those on the ground a chance to take cover once the aircraft was sighted. The relentless artillery barrage has punched gaping holes in the walls of the apartment buildings still standing and torn down balconies.

The U.N.'s World Food Program spokeswoman Bettina Luescher on Wednesday described the plight of civilians in east Aleppo as a "slow motion descent into hell."

Parties to the Syrian conflict have systematically disregarded the laws of war, showing time and again that they are willing to do anything to gain military advantage, the U.N. humanitarian chief said Wednesday. Speaking via video-link from London, Stephen O'Brien told an emergency meeting of the Security Council that was nowhere more apparent than in the besieged city of eastern Aleppo with nearly a quarter of million people trapped inside.

"There are no limits or red lines left to cross. The rules of war — sacrosanct notions borne out of generations of costly and painful lessons and set more than 150 year ago in the First Geneva Convention — have been systematically disregarded in Syria," O'Brien said.

O'Brien said some 25,000 people, most of them women and children, have been displaced from their homes since Saturday and that it is likely thousands more will flee in the coming days as Assad forces step up their attack. He said there was no longer any properly functioning hospital in eastern Aleppo, which has been under siege for nearly 150 days and that most of the people trapped inside don't have the means to survive much longer. He called on the Syrian regime to allow the U.N. and its humanitarian partners unrestricted access to deliver food and medical aid.

Britain's ambassador, Matthew Rycroft, said he had a simple answer to O'Brien's question on why the Security Council could not act. He accused Russia, which in October vetoed a resolution to stop the bombing in Aleppo, of supporting "a deliberate act of starvation and a deliberate withholding of medical care." "The Syrian regime and Russia have been executing a plan that has now laid 1 million people under siege. And executing is an all too appropriate word," he said.

Russia's envoy, Vitaly Churkin, brushed off criticism and said Syria was seeking to eliminate extremists. "We vehemently condemn any attempts to protect terrorists including any political action on a humanitarian pretext which, sadly alas, U.N. humanitarian works have been dragged into," Churkin said. He accused Western powers of hypocrisy, saying there were also great humanitarian needs in the Northern Iraqi city of Mosul and Yemen where the United States is on the opposite side. The U.S. ambassador, Samantha Power, urged the Security Council to pass a resolution sponsored by Egypt, New Zealand and Spain that would mandate a 10-day military halt to allow humanitarian supplies to enter Aleppo.
RELATED TOPICS