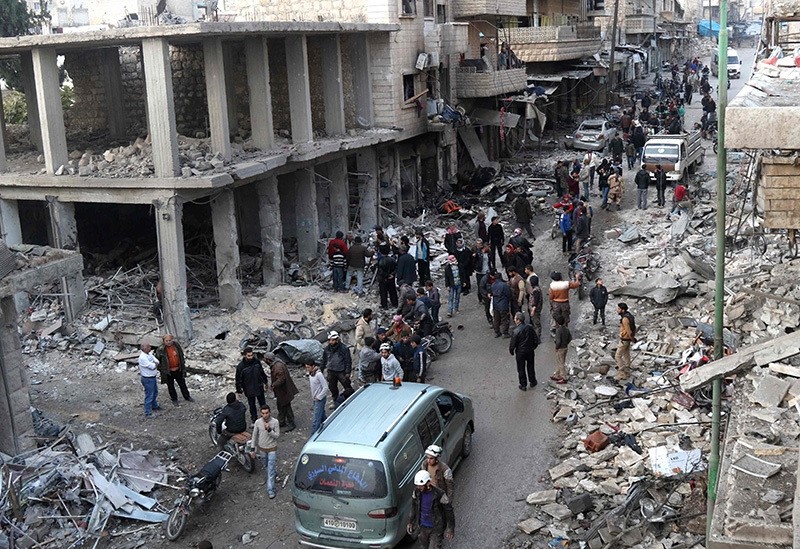 Syrian men and Civil Defense volunteers, also known as the White Helmets, inspect the damage following an air strike on the village of Maarat al-Numan, in the country's northern province of Idlib, on Dec. 4, 2016. (AFP Photo)
by Dec 04, 2016 12:00 am

The death toll in in air attacks on rebel-held areas in the province of Idlib in northwestern Syria has risen to 52 people, the Syrian Observatory for Human Rights monitoring group says.

Earlier reports by the Britain-based watchdog put the toll at 29.

According to the Observatory's latest update, 26 people, including three children, have been killed in strikes by unidentified jets on a market in the town of Kafranbel on the southern edge of Idlib.

At least 18 civilians have been killed in new attacks by warplanes believed to be Russian in the town of Maarat al-Numan also on the southern outskirts of Idlib, the Observatory says.

Two women were killed earlier in the day in airstrikes carried out in Maaret al-Numan and the nearby village of al-Naqir.

Six other civilians have been killed in the town of al-Tamana on the outskirts of Idlib, the Observatory reports.

Idlib is mostly held by a rebel coalition that includes Jabhat Fatah al-Sham, formerly called the al-Nusra Front, a powerful extremist group with ties to al-Qaeda.

Last month, Russia, a key military ally of the Syrian government, announced the start of a major offensive in Idlib and the central province of Homs.