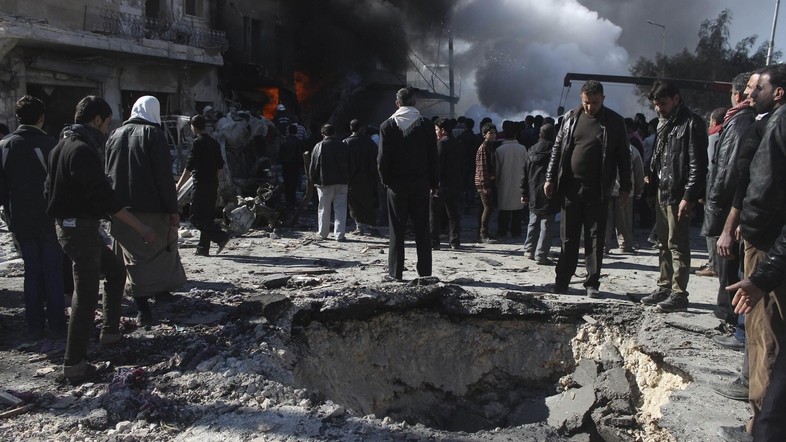 Locals inspect damage to a neighborhood in eastern Aleppo after an attack by forces loyal to Assad. (Reuters Photo)
by Daily Sabah with AFP Dec 05, 2016 12:00 am

Aleppo residents face unthinkable suffering as forces loyal to the Assad regime in Syria gain a stronger foothold in the city's opposition-controlled areas where forces have lost a significant portion of control, while the Syrian regime tells the opposition to ‘leave or face death'

Fierce fighting shook east Aleppo Sunday as Syrian regime forces continued a major assault which allowed them to retake control of more than half of eastern Aleppo, while the Syrian regime has told opposition fighters to either leave the city or face certain death.

Syrian leader Bashar Assad's forces are nearly three weeks into an operation to recapture all of Syria's second largest city which has been divided between Syrian opposition and government forces since 2012.

He spoke to reporters in Aleppo, where forces are working to remove the pocket of opposition on the city's eastern side.

"We will continue fighting until we restore stability and security to all neighborhoods [of Aleppo]," Suleiman said.

Tens of thousands of civilians have fled the offensive, which has made steady gains and threatens to deal a serious blow to the Syrian opposition in its worst defeat since the civil war began five years ago.

Yesterday, heavy fighting was underway in the Myessar district and elsewhere, on the outskirts of newly recaptured neighborhoods in the east.

Syrian state television showed what it said was live footage from the front lines, with its correspondent crouched near a building as explosions were heard in the distance and warplanes screeched overhead.

The Syrian army has gained more than 60 percent of eastern Aleppo after seizing the neighborhood of al-Bab on Friday night, making additional advances on Saturday, according to the Syrian Observatory for Human Rights.

"The army now aims to advance and take control of the Shaar district and the surrounding districts to force the opposition to withdraw toward the southeastern neighborhoods," observatory Director Rami Abdel Rahman said.

The military issued a statement overnight urging Syrians from northeastern Aleppo "to return to their homes after the Syrian Arab Army restored security and stability to those districts and state institutions began rehabilitation work."

On Saturday, several hundred people took advantage of the resumption of government buses from west to east to check on homes long abandoned in territory formerly held by opposition.

But the level of destruction in many places meant people were able to do little more than check whether any possessions could be retrieved from ravaged homes.

"This is all we found, this photo of my niece. It is precious to us, and we found a copy of the Koran, so we brought that too," 55-year-old Um Yayha said.

The army began its assault on the east in mid-November, pounding rebel-held neighborhoods with airstrikes, barrel bomb attacks and artillery fire.

The assault has killed at least 311 civilians, including 42 children, according to the observatory.

Opposition fire on the government-held west of Aleppo has killed 69 civilians, including 28 children, in the same period, the observatory says.

The government advance has prompted an exodus of civilians, with some fleeing south to remaining rebel-held territory and up to 50,000 heading to areas controlled by the government or Kurdish forces.

Russia, a staunch ally of the Syrian regime, said Sunday it had delivered 30 trucks of aid to Aleppo.

"It is important for Russia that people do not starve, that the people feel that they are needed both by the Syrian government and by Russia," Russian official Nikolai Ponomaryov told journalists in Aleppo.

Eastern Aleppo has been under government siege since July, with international aid stocks exhausted and remaining food supplies dwindling.

Russia says it is not participating in the offensive in Aleppo, though its forces are continuing to wage the aerial campaign they began in Sept. 2015 elsewhere in the country.

Last month, Moscow said it was beginning a "major operation" in the northwestern provinces of Idlib and Central Homs.

Idlib is largely controlled by an opposition alliance that includes Fateh al-Sham Front, while Homs is mostly under government control but includes pockets of opposition territory.

Yesterday, the observatory said at least 21 civilians, including three children, were killed in an apparent Russian airstrike on Kafr Nabal in Idlib.

The Observatory says it determines whose planes carried out raids according to their type, location, flight patterns and the munitions involved.

More than 300,000 people have been killed in Syria's conflict, and several rounds of talks have failed to produce a deal to end the fighting.
RELATED TOPICS