Opposition under pressure as Assad troops advance further in Aleppo 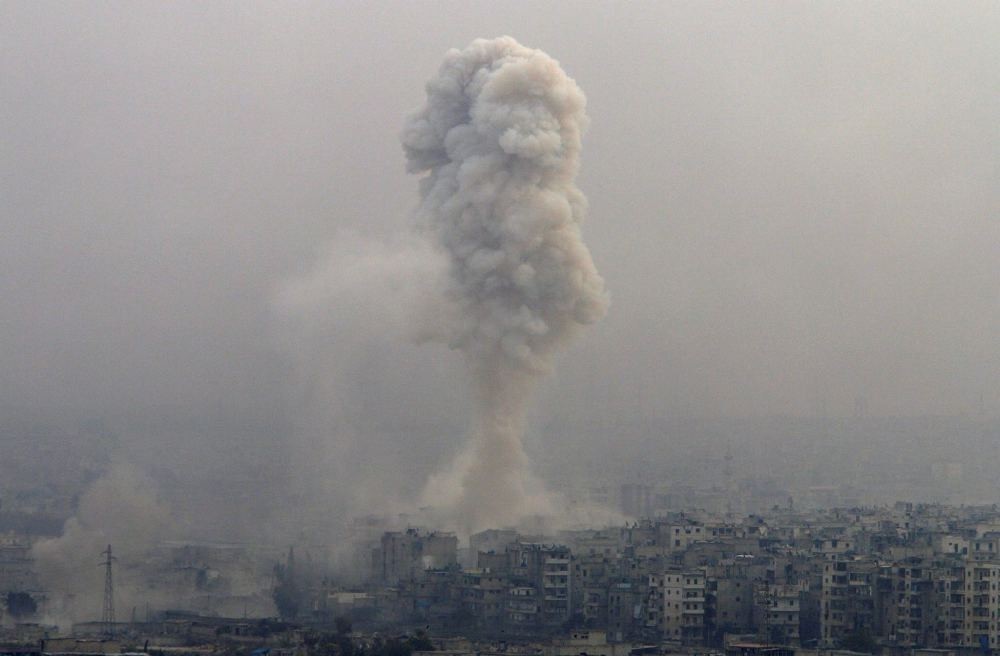 Syrian regime troops and their allied forces were moving deeper into the opposition-held enclave of eastern Aleppo on Monday after taking control of a new neighborhood on Sunday, a monitoring group said. "They managed to take control of Kadi Askar neighborhood. By doing so, the regime and their allied forces are now in control of more than two-thirds of eastern Aleppo," Rami Abdel Rahman, head of the Britain-based Syrian Observatory for Human Rights, told DPA news agency. Opposition yesterday ruled out a pullout from east Aleppo despite sweeping Assad troops' advances.

Over the last 10 days, Bashar al-Assad forces have made key advances in Aleppo's opposition-held east as defenses collapse amid a grueling five-month siege and years of airstrikes and shelling. In the nearby opposition-controlled Idlib province, Syrian opposition activists said Russian and Syrian aircraft stepped up assaults, a day after air raids killed more than 60 people.

Russia, a major military backer of the Syrian regime, its longtime ally, has been pushing for the removal of opposition from eastern Aleppo. Russian and U.S. experts will meet in the coming days to determine the routes and timing for a total opposition withdrawal from eastern Aleppo, Russian Foreign Minister Sergei Lavrov said yesterday. "During the Russian-American consultations the concrete route and timeframe for the withdrawal of all fighters from eastern Aleppo will be agreed upon," the Russian diplomat said, indicating that the talks in Geneva would likely start on Tuesday or Wednesday. "As soon as these routes and timeframes are agreed on, a ceasefire can come into effect," Lavrov said.

Russia's top diplomat also denounced a proposed UN resolution demanding a temporary ceasefire in Aleppo, calling it a "provocative step." "Taking into account all aspects and the current development of the situation, the draft resolution -- coming against the backdrop of the Russian-American initiative -- is, for the most part, a provocative step that undermines Russian-American efforts," Lavrov told a press conference.

A group of European activists is planning a major march from Berlin to the Syrian city of Aleppo later this month, to call for an end to the heavy airstrikes which have killed hundreds.

Polish journalist and blogger Anna Alboth, who initiated the idea, together with her colleagues and friends, told Anadolu Agency they are expecting hundreds to join them in Berlin on Dec. 26.

"Our main aim, or our main dream, is that what is happening in Aleppo should be over, so that the civilians have access to humanitarian help. That is the thing," she said.

In eastern Aleppo, around 300,000 civilians have been reeling under a crippling regime-imposed siege for more than three months.

Since mid-November, more than 758 civilians have been killed -- and 2,500 others injured -- in regime attacks, according to figures released by local civil defense officials.

Alboth said many Europeans are tired of feeling powerless amid the deepening humanitarian crisis in Aleppo, and want to take action. "We are just random Europeans who have had enough," she said, adding that many of them do not want to remain passive. "We would like to give people like us a chance to take part in the movement, to say what they think. We also want to give hope to the people in Aleppo," she said.

The activists, who created the @CivilMarchForAleppo account on social media sites last week are hoping to gather nearly 5,000 people in Berlin on Dec. 26, when they will begin their civil march on Aleppo.

Alboth stressed that their campaign is not affiliated with any political party or organization, and it is an initiative of dozens of volunteers across Europe. "Most of the people in our organizing team are citizens from various European countries. We are around 120 people; most of us are in their 30's or 40's. There is no group behind us," she said.

Alboth underlined that they were open to participation from everyone, including members of political organizations or parties who share their concerns over Syria, but would only allow white flags during their march on Aleppo. Activists are planning to follow a route through the Czech Republic, Austria, Slovenia, Croatia, Serbia, Macedonia, Greece and Turkey, to Aleppo.
RELATED TOPICS