US, Russia trade barbs over stalled efforts amid Assad's assault 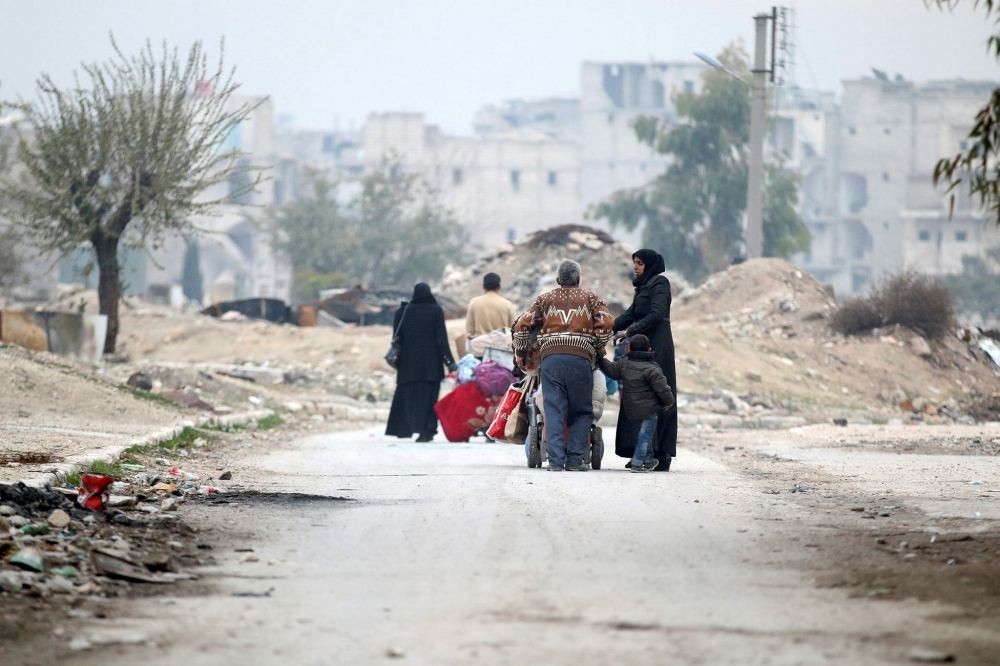 People carry their belongings as they flee the Kadi Askar area towards Bustan al-Qasr neighbourhood, in the opposition-held area of Aleppo, Syria, Dec. 5.
by Compiled from Wire Services Dec 07, 2016 12:00 am

After retaking control of about two-thirds of east Aleppo in recent days, forces loyal to Bashar al-Assad advanced in the large residential district of Shaar. The Assad regime and its ally Russia issued stark warnings to opposition groups in besieged eastern neighborhoods of Aleppo, with Moscow's top diplomat saying the opposition groups will be wiped out unless they stop fighting and leave the city.

The tough rhetoric comes amid Moscow and Washington traded barbs over stalled efforts to end fighting in the battle-worn city as Assad forces are on the verge of seizing a major opposition district of Aleppo.

With the capture of Shaar, the army would hold 70 percent of east Aleppo, four years after opposition first seized it and divided the city. The regime's rapid gains have left opposition fighters scrambling to defend the shrinking enclave they still control in Aleppo's southeastern districts.

Despite mounting criticism of the offensive, world powers have struggled to find a way to halt the fighting. Russia, a key Assad ally, had announced talks with the United States in Geneva on organizing an opposition withdrawal from Aleppo ahead of a ceasefire. But Russian Foreign Minister Sergei Lavrov yesterday accused Washington, which has backed opposition groups against Assad, of backtracking.

"It looks like an attempt to buy time for the[opposition groups] to have a breather, take a pause and replenish their reserves," Lavrov said, adding that Moscow had the impression that "a serious discussion with our American partners isn't working out." Washington for its part accused Moscow of stalling for time after Russia and China blocked a UN Security Council resolution on Monday calling for a seven-day ceasefire. It was Russia's sixth veto and China's fifth of resolutions on the civil war in Syria, now in its sixth year.

The resolution, sponsored by New Zealand, Egypt and Spain, sought to allow for the removal of the sick and wounded and to provide humanitarian aid workers enough time to get food aid and medicine into the besieged city.

The resolution had 11 votes in favor, three against with one abstention but because Russia and China as permanent members of the 15-seat council have veto power the resolution did not pass. Venezuela, a non-permanent member, cast the other "No" vote and Angola abstained.

Russia said the resolution should have been postponed until after the Geneva talks, saying an agreement on organizing a withdrawal was close. The deputy US envoy to the United Nations, Michele Sison, accused Moscow of using a "made-up alibi" to block the resolution. "We will continue bilateral negotiations [with Russia] to relieve the suffering in Aleppo, but we have not reached a breakthrough because Russia wants to keep its military gains."

The loss of Aleppo would be the biggest blow yet to opposition forces in Syria's civil war, which erupted in 2011 with popular protests calling for Assad's ouster. More than 300,000 people have since died and millions forced from their homes.

The most recent offensive has left more than 341 people dead in east Aleppo, including 44 children, the Observatory says. Opposition fired into the regime-held west of the city has killed 81 people, including 31 children, in the same period, the monitor says.

Tens of thousands of east Aleppo residents have also fled to different parts of the city. Among them is Bana al-Abed, a seven-year-old girl whose Twitter account documenting life in Aleppo has gained international attention.
RELATED TOPICS