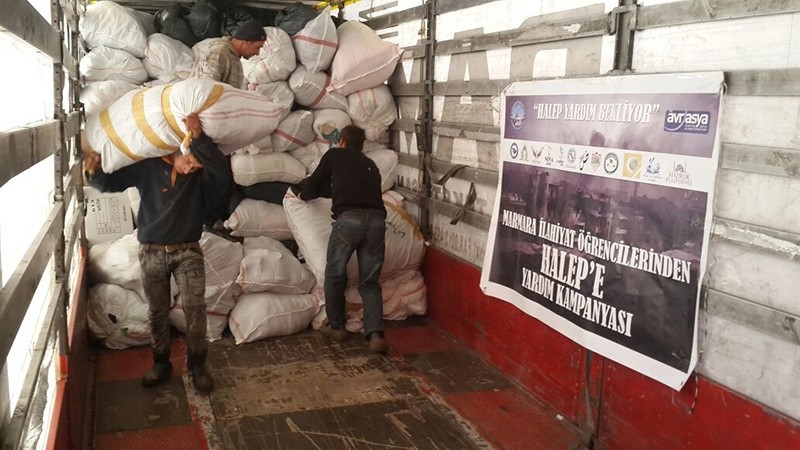 Istanbul's Marmara University has sent 250,000 outfits and 125 large food aid packages to the embattled city of Aleppo, Syria as part of a campaign spearheaded by the university's theology students, a statement said.

One of the volunteers, theology student Abdulhamit Altıntaş, told Anadolu Agency Thursday that three truckfuls of aid supplies have been sent to the war-torn families of Aleppo.

Separately, the head of Turkey's Yardım Eli (Helping Hand) Foundation announced that they will also join the giant aid campaign on Thursday. He underlined that the situation in Aleppo is growing worse and the people there need urgent help.

Ali Yalçın, who heads Turkey's largest civil servants' union Memur-Sen, also announced that on Dec. 14 they will start another fund drive to send a large humanitarian aid convoy to Aleppo.

"We will also hold a big march on Dec. 16 to raise public awareness of this issue," Yalçın said.

Memur-Sen has run the aid campaign with Turkey's Humanitarian Relief Foundation, or IHH, and they are planning to send 100 tons of flour to Syria, the IHH head announced Thursday.

Aleppo resident Hassan Abu-Obeyd told Anadolu Agency, "People can't get bread every day, but only every other day."

Majid Usman, the Aleppo representative of the Humanity Defense and Brotherhood Association (IMKANDER), a human rights and humanitarian aid association dedicated to protecting the rights of asylum-seekers, said that due to intense shelling and attacks on civilians in Aleppo, they are struggling to find medicine and food.

Usman agreed that aid corridors should be opened into Aleppo to enable humanitarian organizations to deliver supplies.

Since mid-November, more than 775 civilians have been killed and 2,500 injured in regime attacks on opposition-held parts of Aleppo, according to local civil defense officials.

Fierce bombardments have forced most of the city's hospitals to halt operations while most academic activities have been suspended.

The recent escalation comes amid attempts by the Russia-backed Assad regime to wrest control of eastern parts of Aleppo that were captured by armed opposition groups four years ago.

Syria has been locked in a devastating civil war since early 2011, when the Assad regime cracked down on pro-democracy protests-which erupted as part of the "Arab Spring" uprisings-with unexpected ferocity.