Turkey launches nationwide aid campaign to save lives in Aleppo 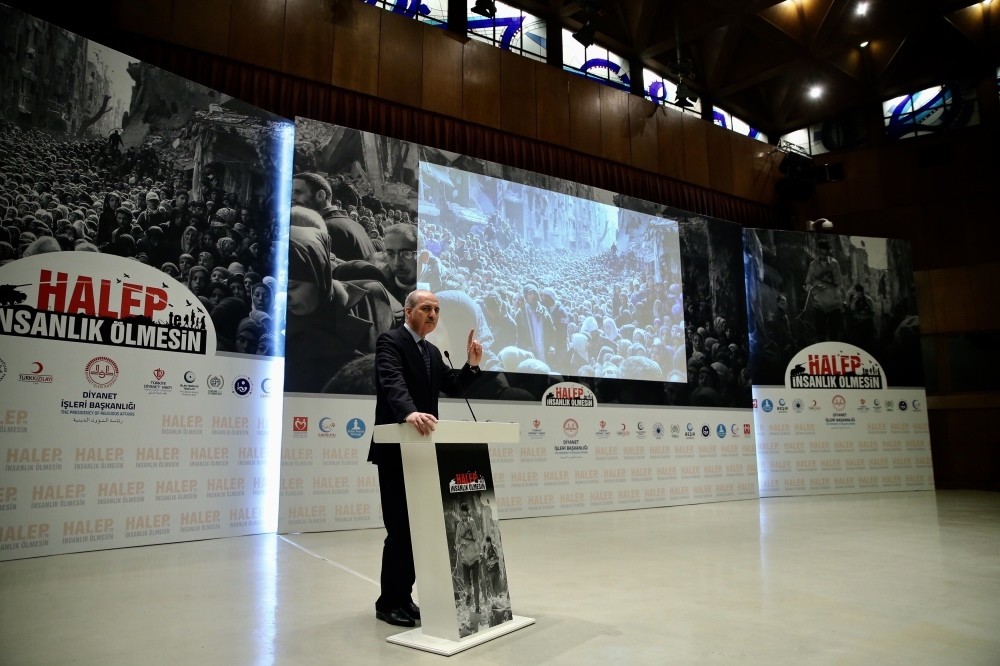 Deputy Prime Minister Numan Kurtulmuu015f speaks at the event to launch the campaign, against a backdrop of photos of Aleppo residents.
by Daily Sabah Dec 09, 2016 12:00 am

Launched by Turkey yesterday, the ‘Don't Let the Humanity Die in Aleppo' campaign aims to deliver humanitarian aid to the people of Aleppo, which has been subjected to heavy bombing raids by the Assad regime

An aid campaign, organized by a foundation linked to Turkey's state-run religious authority, looks to address the plight of people in Aleppo, the Syrian city that has been subjected to constant bombings by forces loyal to the Assad regime in their bid to drive out the opposition force.

As atrocities escalate in Aleppo, which is more or less in ruins after years of conflict, the aid campaign titled "Don't Let the Humanity Die in Aleppo," will coordinate humanitarian efforts for the city in Turkey. Donors can make donations through SMSs or make online payments.

Turkey, which already hosts a huge number of Syrian refugees fleeing the five-year-long brutal conflict, is also among the major donors for the welfare of the displaced Syrian population and it repeatedly urges the international community to spend more to address the needs of millions of refugees in the country.

The campaign organizers in a statement said, Aleppo, Syria's second largest city, is embattled with bombings, a dire food shortage, while those fleeing the city were unable to find shelter near the city, where at least 1,500 civilians, majority of them children, were killed in just one month.

They said the locals were unable to access basic humanitarian needs for more than 100 days as the city was closed to the access of aid convoys and people both face hunger and the upcoming winter.

Aleppo is among the Syrian cities where the ongoing conflict has taken its full toll as residents cannot even find a spot to bury their dead while all the hospitals were destroyed in the conflict. Few doctors remaining in the city face a barrage of patients, injured in the conflict and try to treat them in makeshift clinics with the little supply they have.

Speaking at the launch of the aid campaign, Mehmet Görmez, head of the Presidency of Religious Affairs (Diyanet) called the international community to take concrete steps to maintain a cease-fire to save "those who exhausted their means for survival."

"We hear the cries of children at bombed-out hospitals, children drowned (en route to other countries). We hear today the cries of the woman who died on her wheelchair on a street while looking for her missing children. And today, we are here to shout back and say the humanity is not dead and it will not be, for Aleppo," he said.

Görmez also called wealthy Muslims in oil-rich countries to help people in Syrian cities. The senior Turkish official also hit out at the sectarian divide in the Muslim world and said the suffering of the people would not end "as long as we hold our sect, race, congregations, and communities higher than Islam and approve the killing of other Muslims."

He was joined by Osama al-Rufai, a senior Syrian cleric who heads the Damascus Union of Scholars. Al-Rufai said Turkey's attitude toward Syria and reaction to what happens in Aleppo exhibited the country's sensitivity toward Muslims, praising the country as "generous."

Speaking at the event, Deputy Prime Minister Numan Kurtulmuş said the campaign aimed to raise public awareness to the situation in Aleppo and draw the world's attention to the plight of Syrians.

"This is not just an ordinary aid campaign. It is an occasion to raise our voice against demolition of a civilization in Aleppo, to the killings of people," he said.

Kurtulmuş said the five-year war destroyed any trace of people's dignity in Syria where chemical weapons were used and the international community did nothing but condemn the act.

The deputy prime minister said the people of Aleppo were abandoned by humanity and driven into desperation.

"As Turkey, we want to give a message that Turkish nation, descendants of the Ottomans, will not leave you," Kurtulmuş said, referencing to the historical Ottoman domination in the region.

He said Turkey has donated nearly $15 billion for Syrian refugees. "We are not one of the richest countries in the world, but what we spent for these people was the sign of the wealth we have in our hearts and it was our humanitarian duty to spend it," he said.
RELATED TOPICS