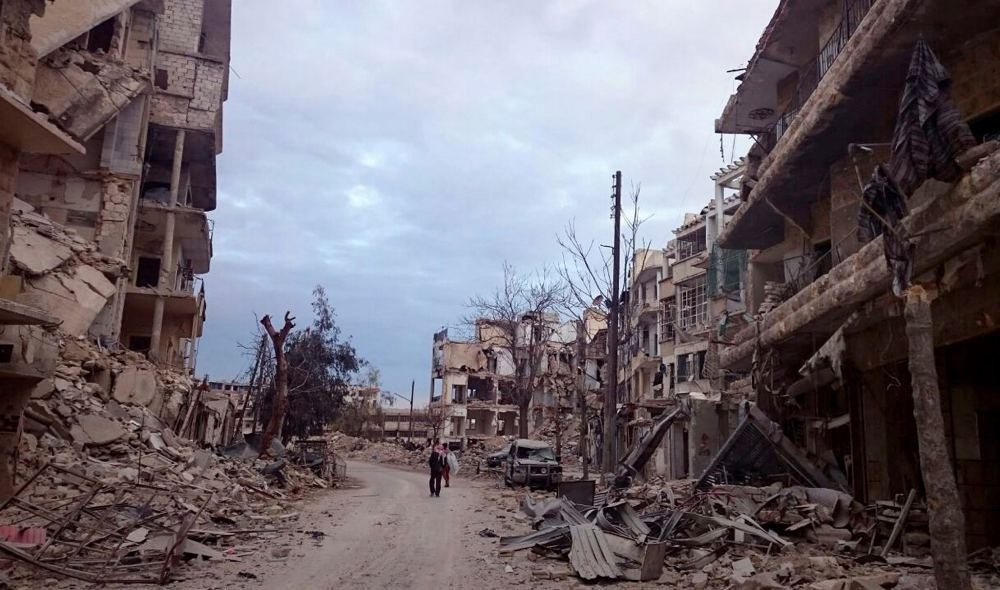 Men walk past damaged buildings and shops in the eastern Aleppo neighborhood of al-Mashhad, Syria, Dec. 8.
by Compiled from Wire Services Dec 09, 2016 12:00 am

As the war-torn city of Aleppo shakes with explosions and gunfire worsening the humanitarian situation, the United States and Russia are yet to reach an understanding over the situation in Aleppo

Amid intense bombings of a number of neighborhoods that remain under opposition control in the city of Aleppo, there has been no solid agreement reached between the United States and Russia over a ceasefire even though both sides claims to be close to reaching an understanding on the war-torn Syrian city.

U.S. Secretary of State John Kerry said yesterday he was "hopeful" about reaching an agreement with Russia over the Syrian city of Aleppo but that he was still waiting for "certain feedback and input." "We are working on something here," Kerry told reporters after meeting Russian Foreign Minister Sergei Lavrov at an Organization for Security and Cooperation in Europe conference in Hamburg, Germany. When asked if he was confident about a breakthrough, Kerry said he was not confident, but "hopeful."

Russia is in favor of continuing contacts between U.S. Secretary of State John Kerry and Russian Foreign Minister Sergei Lavrov in an effort to reach a deal over the Syrian city of Aleppo, Kremlin spokesman Dmitry Peskov said yesterday.

Russian Deputy Foreign Minister Sergei Ryabkov said the Kerry-Lavrov talks were extensive but a final deal has not been worked out yet.

"In the past several days an intensive document exchange on the situation in Aleppo has taken place," Ryabkov was quoted as saying in the Interfax news agency yesterday. "We are close to reaching an understanding, but I want to warn against high expectations," he also said.

As heavy fighting continues to engulf eastern Aleppo, the humanitarian situation is "known to be catastrophic", the ICRC said. The agency called on all warring sides to allow a humanitarian pause so that aid supplies can be delivered to the besieged sector which has been inaccessible since April. "We will not give up on the civilians caught amidst the fighting, and will keep trying and negotiating to reach them and respond to their needs," Armstrong said.

Nearly 150 civilians, most who are disabled or in need of urgent care, were evacuated overnight from a hospital in Aleppo's Old City, the first major medical evacuation from the eastern sector, the International Committee of the Red Cross said on Thursday.

They had been trapped there for days from nearby fighting and as the front line moved closer, ICRC spokeswoman Krista Armstrong said, there was only five staff to look after them.

Six children, found alone in nearby streets, aged from seven months to seven years, were also evacuated. "The eldest said they had not eaten for two days", she told Reuters. Eleven patients died from lack of medication or were killed in crossfire before ICRC and Syrian Arab Red Crescent teams could reach them late on Wednesday, the agency said in a statement.

Marianne Gasser, the head of the ICRC delegation in Syria, who is in Aleppo, said of the evacuees: "Many of them cannot move and need special attention and care."

The United Nations has said for weeks that some 400 sick and wounded patients require emergency medical evacuation from eastern Aleppo for treatment, but it was not clear whether the 150 were among them.

With the latest gains, the endgame for Aleppo, which has been carved up between the Assad forces and the opposition for the past four years, appears to draw even closer. If Aleppo - the country's former commercial hub - is captured by Assad troops, it would be a turning point in the conflict, putting the four largest cities in Syria and the coastal region back under Assad control.

The Assad regime and its ally Russia had previously rejected a ceasefire for the war-torn city, keeping up the military offensive that has forced opposition retreats and a massive displacement of Aleppo civilians.

Aleppo is the focal point of the six-year war in Syria. Assad said earlier he was determined to retake the country's largest city and former commercial capital as his forces have maintained a siege on the opposition-held eastern quarters since September. The U.N. estimates 275,000 people are trapped inside with dwindling supplies of food and medicine.
RELATED TOPICS