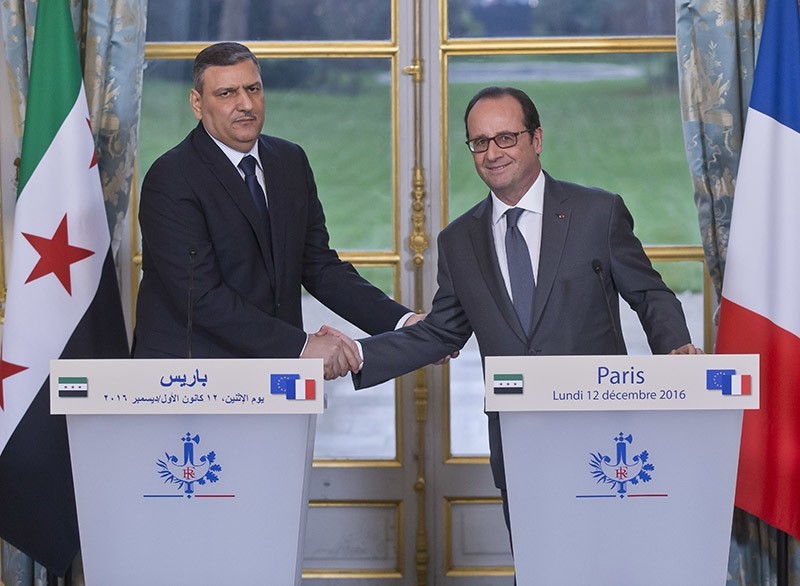 Chief Negotiator for the Syrian Opposition Riyad Hijab, left, and French President Francois Hollande shake hands during a joint media conference at the Elysu00e9e Palace in Paris on Dec. 12, 2016. (AP Photo)
by Daily Sabah Dec 13, 2016 12:00 am

Syrian opposition's Chief Negotiator Riad Hijab said on Monday the Assad regime's gains in Aleppo will not force them to make concessions over their stance during a meeting with French President François Hollande in Paris.

Hijab, head of the Syrian opposition's High Negotiations Committee, also noted that they will continue striving for a true political transition in Syria.

In reference to the recent recapture of Palmyra from the Assad regime by Daesh, Hijab said:

''Assad forces act like lions against civilians in Aleppo, whereas they flee like rats in front of Daesh in Palmyra.''

Hijab also stressed that the current sectarian-based conflicts across the region are fed by the policies of Iran.

''Assad believes that he will force us to make compromise on our stance by making some military progress in the neighborhoods of Aleppo, that is not going to work that way,'' added Hijab.

Expressing great concern over the situation in Aleppo, Hollande noted that the ongoing massacres and destructions undertaken in a dramatic context by the Assad regime cause indignation and outrage.

Hollande also pled for a humanitarian corridor to allow civilians to flee and get access to food and medical aid, as the Assad regime forces say they have gained control of 98 percent of eastern Aleppo.

The French president said "there cannot be any solution without a cease-fire."

''France will continue to back Syria's opposition in its fight against the Daesh terror group and other extremist groups, and at the same time against the Assad regime,'' pledged the French President.

Aleppo is the focal point of the six-year conflict in war-torn Syria. The U.N. estimates 275,000 people are trapped inside with dwindling supplies of food and medicine as Assad regime forces gain control of around 98 percent of the opposition-held eastern Aleppo and close in on the last opposition-held pockets.