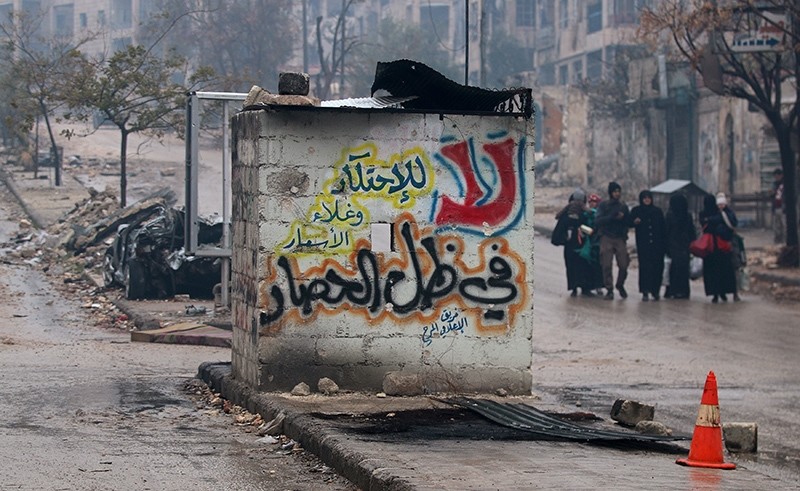 People carry their belongings as they flee deeper into the remaining rebel-held areas of Aleppo, Syria December 13, 2016 (Reuters Photo)
by Compiled from Wire Services Dec 14, 2016 12:00 am

An evacuation of opposition-held areas of eastern Aleppo was delayed on Wednesday for reasons that were not clear, the Syrian Observatory for Human Rights said, holding up implementation of an agreement to restore Assad regime control over the area.

Observatory Director Rami Abdulrahman said the first group of evacuees was due to leave at 5 a.m. (0300 GMT), but nobody had left an hour later.

A Reuters witness said none of the buses brought to evacuate the people had moved into the city's eastern districts by 6:15 a.m. (0415 GMT).

Residents had strongly mixed emotions, their sense of relief at a possible end to violence coupled with sadness at potentially being forced to leave their homes, under a deal reached the previous day between Turkey, a backer of opposition groups, and Russia, a key ally of the Assad regime.

"It could be the last night in our city... We do not know if could come back. It is a very hard moment," said a man inside eastern Aleppo named Yaser.

People in rebel-held eastern Aleppo have been packing their bags and burning personal possessions as they prepare to evacuate the area, a witness said, fearing looting by the Assad forces and its Iran-backed allied militias when they restore control.

Eastern Aleppo residents were seen burning things they could not take with them, such as pictures, books, clothes and even a car, a Reuters witness said, since an evacuation deal was announced late on Tuesday.

Activists and medical workers have expressed fears of reprisals by the Assad regime forces and their allies, including foreign militias. The government has a grim history of abuses towards those who expressed dissent, even non-violently.

Sources on Tuesday had given different expected start times for the evacuation. Opposition officials said they had expected a first group of wounded people to leave on Tuesday evening.

A military official in the alliance supporting the Assad regime had said the evacuation was due to start at 5 a.m. (0300 GMT).

An Assad regime source said the regime forces would likely declare the city to be under its control on Wednesday or Thursday.