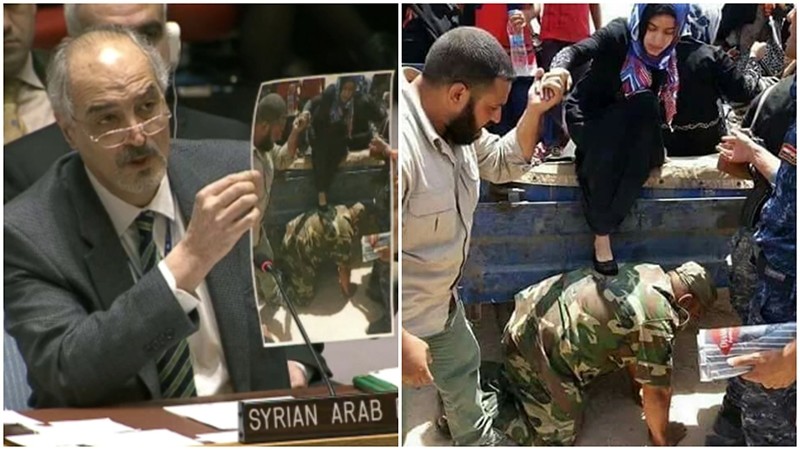 Screenshot from UN Web TV(L) shows Ja'afari at UNSC meeting, with a photo from June(R) showing a woman in Iraq.
by Daily Sabah with Agencies Dec 14, 2016 12:00 am

The Syrian regime's U.N. ambassador tried to trick the United Nations Security Council on Tuesday by using a photo from Iraq and claiming it was from Aleppo.

After being accused of carrying out revenge attacks against civilians and executing them, Bashar Ja'afari decided to prove them wrong by showing photographic evidence of the 'good deeds' the Syrian regime was doing in the war-torn city.

Responding to criticism by the U.N. and U.S., Ja'afari said that the regime's aim in Aleppo was "to protect civilians and preserve life".

"This is what the Syrian [regime] army is doing in Aleppo," he says, holding up a photo showing a woman being helped down from a truck, with a soldier kneeling as to provide her a step.

"This is a Syrian soldier. She is a woman fleeing eastern Aleppo," he says assertively.

The photo he displayed at the UNSC meeting was in fact from Iraq, and was showing a woman in Fallujah being helped by a solider of the Iraqi Popular Mobilization Units.

The photo was from June, 2016 when Iraqi troops forced Daesh out of Fallujah.

Earlier, Ja'afari had come under a lot of criticism, especially from U.S. Ambassador Samantha Power as well as from the U.N. envoy for Syria, Staffan de Mistura, who both accused regime forces of committing war crimes.

Power had said: "To the Assad regime, Russia and Iran -three member states behind the conquest of and carnage in Aleppo - you bear responsibility for these atrocities."

De Mistura had said that the UN's top priority was that civilians who want to go with the fighters to opposition-held Idlib province be allowed to do so. He also expressed concern that Idlib could become the next target of the Syrian regime.

With an estimated 1,500 opposition fighters and 50,000 civilians still believed to be trapped in Aleppo, De Mistura warned that such figures must be taken "very cautiously" because the U.N. isn't there.

Turkey, the United States, Britain and France are accusing Syria's Bashar Assad of committing atrocities against civilians in the opposition-held area.