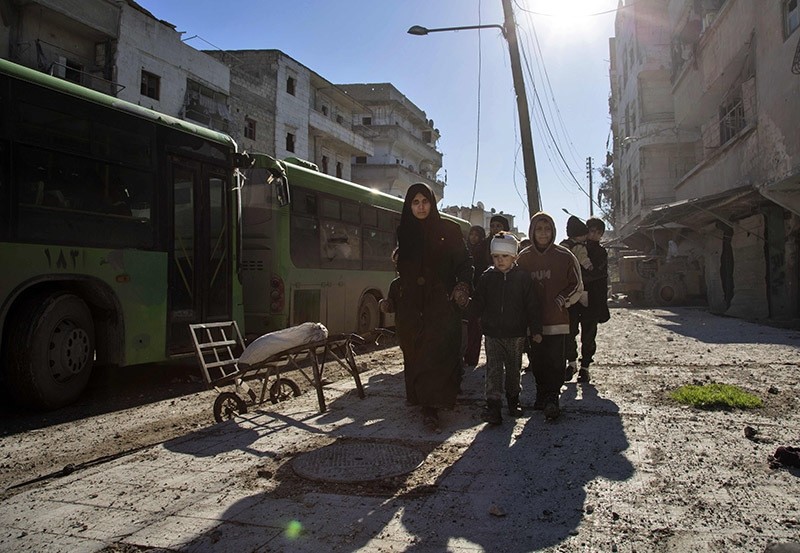 At least four civilians were killed and four others injured when Iranian-backed Shiite militias opened fire on a convoy set to evacuate injured civilians from war-torn eastern Aleppo, according to reporters at the scene of the attack.

The civilians on buses were waiting to move to the Ramuse district before the convoy was attacked by the militias.

Najib Ansari, Aleppo's civil defense director, told that they have so far received three people injured in the attack.

Reporters noted that following the attack, the convoy started to head back to eastern Aleppo.

Later in the afternoon, warplanes belonging to the Assad regime carried out two airstrike on the area of Rashidin, located in opposition-held eastern Aleppo, Anadolu Agency reported. Iran-backed Shiite militias also carried out four missile attacks on the region.

The Rashidin area is located on the route of the first convoy which evacuated injured civilians from eastern Aleppo.

The evacuation of civilians and opposition fighters from the tiny bit of territory which the opposition still holds in eastern Aleppo had been supposed to begin at dawn Wednesday, but shelling by the Assad regime and Iran-backed militias resumed in the morning hours before it could take place, violating the cease-fire.

According to unofficial numbers there are about 70,000 to 80,000 civilians in stuck in eastern Aleppo.

The Turkish Foreign Ministry Spokesperson Hüseyin Müftüoğlu said on Thursday that Turkey has been involved in a busy diplomatic traffic with Russia and Iran to bring the truce deal back into force.