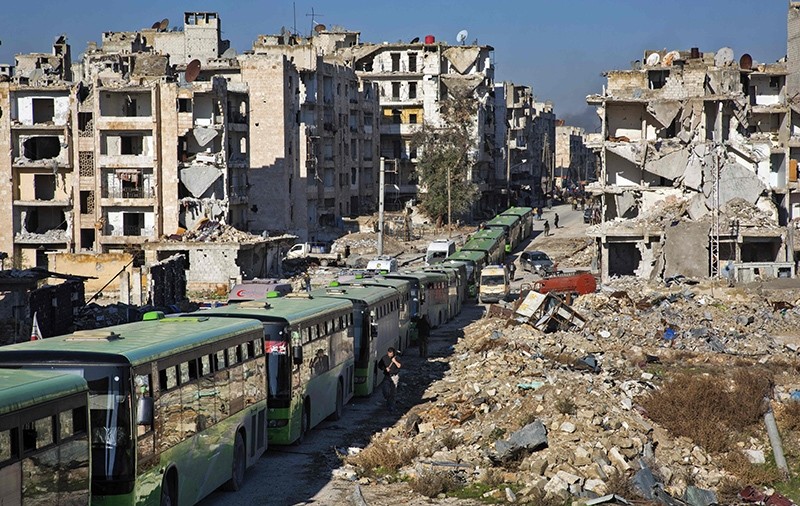 Buses are seen during an evacuation operation of opposition fighters and their families from eastern Aleppo on December 15, 2016 (AFP Photo)
by Daily Sabah with Agencies Dec 16, 2016 12:00 am

Foreign Minister Mevlüt Çavuşoğlu said on his Twitter account that a total of over 7,000 civilians have been evacuated from Aleppo under the scope of the deal mediated by Turkey and Russia.

Earlier on Friday, Çavuşoğlu said that a third convoy consisting of 16 buses and 8 minibuses have departed from East Aleppo.

Presidential spokesperson İbrahim Kalın also confirmed on his Twitter account that 7,500 people have entered Idlib from opposition-held Aleppo. He noted that preparations have been made to meet the shelter, food and medicine needs of the evacuees.

Deputy Prime Minister Veysi Kaynak said that "20 buses from Aleppo have reached the safe zone under control of the Free Syrian Army in Idlib." He said about 30-35 wounded people being treated at the field hospital just on the other side of the border.

Kaynak said there had been a discussion with Syrian opposition forces over the possibility of establishing a center "within a security zone in Syria." He told the private Doğan news agency that "Idlib has no physical capacity to accommodate so many people."

Kaynak estimated there are 80,000 to 100,000 individuals who would like to leave Aleppo under the cease-fire deal that Turkey helped broker.

He added that Turke is willing to provide assistance to "legitimate" Syrian opposition groups to help meet their needs. The minister spoke after visiting the Cilvegözü border crossing with Syria in southern Turkey

Thousands of civilians and opposition fighters left Aleppo on Thursday under an evacuation deal mediated by Russia and Turkey.

The International Committee of the Red Cross said the operation could take days as U.S. Secretary of State John Kerry warned action was needed to prevent a Srebrenica-style massacre with tens of thousands of civilians still trapped in the city.

"Some 3,000 civilians and more than 40 wounded, including children, were brought out," the head of the International Committee for the Red Cross in Syria, Marianne Gasser, said after the first two convoys left.

"No one knows how many people are left in the east, and the evacuation could take days," she added.

Evacuees were first brought to a safe zone in Idlib, from where the most seriously injured were then sent to Turkey.

The seriously wounded were initially treated by first aid teams at Turkey's Cilvegözü Border Gate and then referred to Reyhanlı State Hospital and other hospitals in the city.