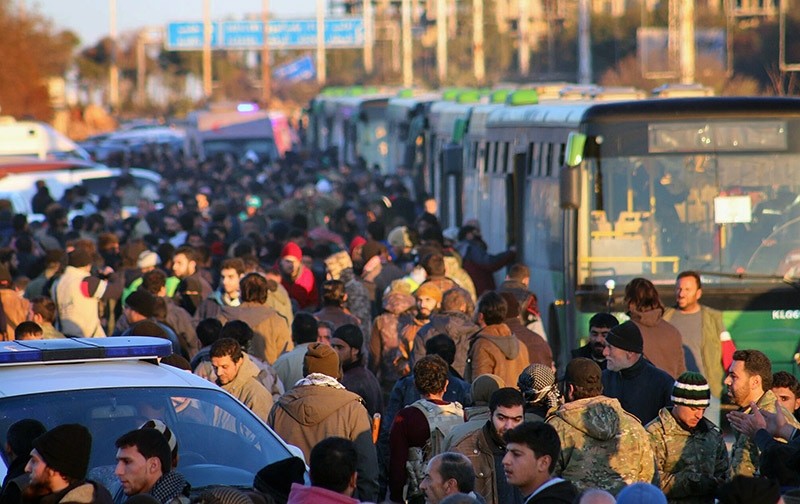 Dozens of buses began entering the last opposition-held parts of Aleppo on Sunday to resume the evacuation of thousands of increasingly desperate Syrian civilians trapped in the besieged enclave.

As international alarm grew over the plight of the residents including women, children, the sick and wounded, the UN Security Council was to vote on whether to send observers to the battleground city.

The evacuations were suspended on Friday, a day after thousands of people had begun leaving the city under a deal allowing the regime to take full control of Aleppo.

Buses started entering several neighborhoods on Sunday under the supervision of the Red Crescent and the International Committee of the Red Cross (ICRC), state news agency SANA said.

A military source confirmed to AFP that a new evacuation deal had been reached. State television said 100 buses would take people out of Aleppo.

The main obstacle to resumption had been a disagreement over the number of people to be evacuated in parallel from two Shiite villages, Fuaa and Kafraya, under opposition siege in northwestern Syria.

An opposition representative told AFP on Sunday that a new agreement had been reached under which evacuations would take place in two phases from Aleppo, Fuaa and Kafraya as well as Zabadani and Madaya, two opposition towns besieged by the regime in Damascus province.

The UN Security Council was set to meet in New York to vote on French proposals to dispatch monitors to oversee evacuations and report on the protection of civilians.

The draft text said the council was "alarmed" by the worsening humanitarian crisis in Aleppo and by the fact that "tens of thousands of besieged Aleppo inhabitants" are in need of aid and evacuation.

"Our goal through this resolution is to avoid another Srebrenica in this phase immediately following the military operations," French Ambassador Francois Delattre told AFP, referring to a 1995 Bosnian war massacre.

But the proposals face resistance from veto-wielding Russia, a key backer of the Assad regime.

Families have been sheltering during the night in freezing temperatures in bombed out apartment blocks in Aleppo's Al-Amiriyah district, the departure point for evacuations before they were halted.

An AFP correspondent who visited a hospital in the opposition sector saw appalling conditions with patients lying on the floor without food or water and almost no heating.

Abu Omar said that after waiting outside in the cold for nine hours the previous day, he had returned on Saturday only to be told the buses were not coming.

"There's no more food or drinking water, and the situation is getting worse by the day," he said, adding that his four children were sick because of the cold.

Dozens of trucks with humanitarian aid crossed the Turkish border Saturday into Syria, piling supplies in a buffer zone.

Aleppo has seen some of the worst violence of the nearly six-year war that has killed more than 310,000 people.

UN envoy Staffan de Mistura estimated that as of Thursday around 40,000 civilians and perhaps as many as 5,000 opposition fighters remained in Aleppo.

The International Committee of the Red Cross (ICRC) appealed for safe passage for the civilians still trapped in the city.

"People have suffered a lot. Please come to an agreement and help save thousands of lives," said ICRC Syria delegation head Marianne Gasser.

"We cannot abandon these people."

Turkish sources stated that 117 wounded from Aleppo have crossed into Turkey for treatment since Thursday.

Before evacuations were suspended around 8,500 people, including some 3,000 fighters, left for opposition-held territory elsewhere in the north, said the Syrian Observatory for Human Rights.